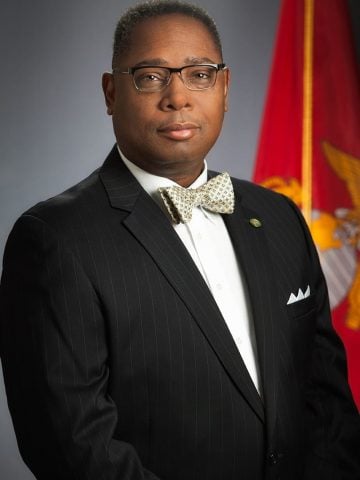 Eddie was born, raised and educated in Norfolk, Virginia. After graduating from Lake Taylor High School he enlisted in the United States Marine Corps and became a career Marine. While serving as a Marine he was blessed to be assigned to work in some of the most prestigious jobs and duty stations around the world, such as:

In May 2005 he enrolled in Tidewater Community College at night where he studied General Courses/Pre-Funeral Service. In January 2006, he retired as a Sergeant Major (E-9) after serving 28 years and holding every enlisted rank within the Marine Corps. After retirement he became a federal employee where he worked for the Department of the Army at Fort Eustis as a Transportation Analyst. He was given the opportunity to rejoin the Marine Corps, this time out of uniform as a special staff officer to the Commander as the Family Readiness Officer. During this time he continued his studies at night.

In December 2009 he earned an Associate’s Degree in Applied Science from Tidewater Community College in Virginia Beach, Virginia where he received his formal education in Funeral Service. In March 2011 he was licensed as a Funeral Service Provider in the Commonwealth of Virginia. In May 2011 he graduated from the Advance Post Mortem Reconstructive Surgery Seminar and the Advance II Post Mortem Reconstructive Surgery Seminar held at the Fountain National Academy of Professional Embalming Skills in Springfield, Missouri.

Eddie joined the staff of Altmeyer Funeral Homes, in March 2012 where he is serving families as a licensed Funeral Director/Embalmer. Eddie is a member of First Baptist Church Campostella in Norfolk, Virginia.