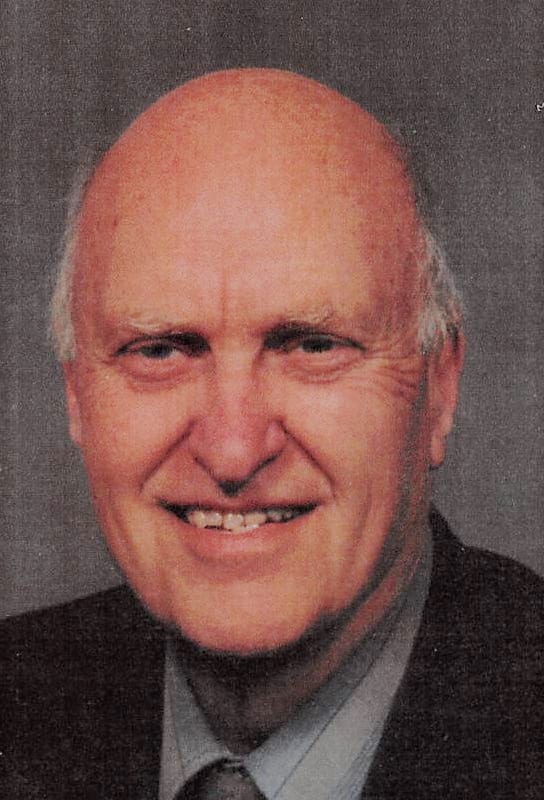 Wilburn Glenn “Bill” Houts went to be with the Lord on February 26, 2016 at the age of 94. He was born in Antioch, Illinois on August 27, 1921 to Guy Joseph Houts and Della Gildea Houts. He had three older siblings: Bernice, Garnett, and Ken. Bill spent most of his growing up years in Westfield, New Jersey where the family moved to when he was a small boy. After graduating from high school, Bill moved to Detroit, Michigan to begin a new life. He was able to get a good job at Detroit Edison electric company as a printer in their print shop. He retired in 1985 after 40 years of service.
Bill met his wife, Margaret, at a single’s dance in Detroit while the song Some Enchanted Evening was playing. They were married in October, 1954 at the Central Methodist Church in Detroit. They settled in Dearborn, Michigan, where they raised their three children. After retirement, they moved to their cottage on Lime Lake in Northern Michigan. They had many happy years together at the lake and in the Traverse City area enjoying the company of family & their close group of friends.
They traveled extensively around the world and were active in the Methodist Church in Dearborn and in Traverse City.
Bill and Margaret moved to Newport News, Virginia in 2007 to be closer to family. Margaret died in 2008 at the age of 83. They were married for over 53 years. Bill was a member of the Denbigh United Presbyterian Church.
Bill was a very friendly and outgoing person. He made everyone he met his friend. He loved the outdoors, especially boating and camping. He also loved music and was a long time player of the organ and the harmonica. He was a wonderful husband and father. He would frequently take his children on outings such as ice and roller skating or sledding.
Left to cherish Bill’s memory are his children Liz Burroughs and husband Bob of Newport News, VA, Jim Houts and wife Paula of Ramsey, MN, and Julie Davis and husband Daryl of Lebec, CA, and many other family members including grandchildren, great grandchildren and friends.
A Service of Remembrance will be held at 1:00 PM on Tuesday, March 1, at Denbigh United Presbyterian Church, 302 Denbigh Blvd., Newport News.
The family requests that expressions of sympathy take the form of contributions to the Mennowood Retirement Community or Intrepid Hospice.  Condolences may be made at altmeyerfuneralandcremation.com

I never met your Dad, Liz, and from what I read, I missed a good one. I certainly appreciate where your love of music comes from. My sincere sympathy to you and all of your family.

Sorry about the loss of your dear love one. We have a wonderful promise in the near future. God will swallow up death forever and wipe the tears from all faces. -Isaiah 25:8 May you find comfort and hope in God’s word the Bible.