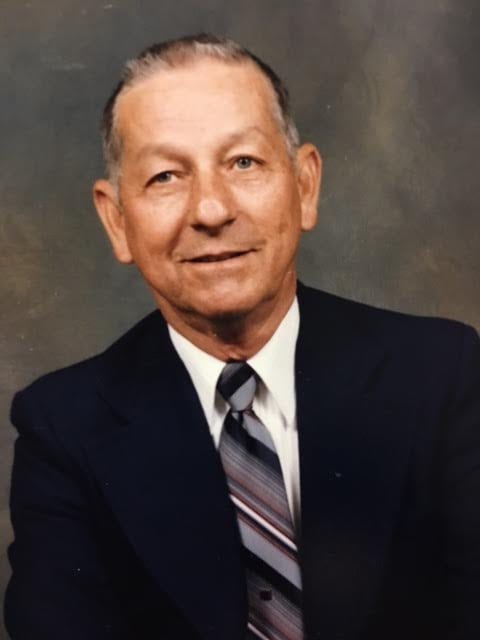 Wayne B. Temple, of Chesapeake, went to be with his Savior at age 90 on October 9th, 2016. He is preceded
in death by parents Chalmers and Jennie Temple as well as three brothers and two sisters.
He is survived by his loving wife of 68 years, Sue Helen Temple of Chesapeake, VA and his 5 children: Jim and
Linda Temple of Harrisburg, NC, Eddie and DruAnne Temple of Raleigh, NC, Sheila and Ron Baskins of
Norfolk, VA, Brenda Flora of Chesapeake, VA and Wanda and Eric Henderson of Bryan, TX, two sisters
Barbara Lane of South Boston, Va and Ann Brantley of Zebulon, NC. He will also be missed dearly by his
11 grandchildren and 22 great grandchildren.
Wayne proudly served in the US Coast Guard from 1943 to 1946. He retired from Norfolk NAS as a jet fighter electronics technician in 1975. After retirement Wayne and Sue set up home on Lake Gaston. Paw Paw and Grandma Temple hosted their children and grandchildren for 25 fun filled years on the lake. Wayne loved the Lord and he loved doing God’s work. He spent many hours working and painting at Fairmount Park Freewill Baptist Church which later became Gateway Freewill Baptist where he was a member at his passing. He was a charter member of
Lake Gaston Baptist Church where he also spent countless hours establishing that place of worship. Paw
Paw had what we refer to as common sense. He was the one we all turned to for advice as well as the
one we could depend on to fix anything from a radio to a bicycle. He will truly be missed by many.
The family will receive family and friends October 13, 2016 from 6-8 pm at Altmeyer Funeral Home on
Greenwich Road in Va. Beach. A Celebration of his Life will be held at Gateway Freewill Baptist Church 5473
Va. Beach Blvd, October 14th, 2016 at 1:30 pm followed by procession to Rosewood Memorial Park. In
lieu of flowers please donate to charity of your choice in his name.
Condolences may be expressed to the family below.

Sue, we are very sorry for the lose to you and your family. We regret that we didn’t get to know Wayne better.
Edmunda and Bob

Uncle Wayne was the most fun living man we have every known. When our 2 boys were little & into their teenage years they would beg to go to Uncle Wayne’s & Aunt Sue’s at Lake Gaston. These 2 boys knew they were going to have a great time. Even to this last Temple Reunion this past May, they had to speak to their Uncle Wayne. He was loved by everyone. His home was open to anyone. You will be missed. Rest In Peace. This Temple family loved you very much.

Love all of you. I know you will miss him. Just rejoice in all the memories you have.

FOR A LOVED PAPA. NOW YOU ARE LOOKING TO YOUR ETERNAL HOME

Our lost is Heaven’s gain. Prayers for all my extended family. Loved Mr. Temple and have many great memories of him. Jeremiah 33:3

Such a great loss to this family. I don’t think he ever met a stranger, he always made you feel at home. My prayers are with you all.

Words don’t come easy for a grandfather I have admired for all my life. So blessed to be a part of his legacy. You will be missed grandaddy, and I love you so much!