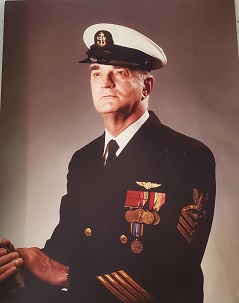 Warren Cord Massey, 93, passed away peacefully at his home in Virginia Beach on Friday, March 25th, 2022, with family by his side.
Warren was born on October 3rd, 1928, in Sonestown, PA, to James Massey and Alice (Sones) Massey. He was the younger brother to James, ‘Bud’ Massey, of PA, who preceded him in death.
In 1945, Warren joined the United States Navy and served his country honorably for twenty years, retiring at the rank of Chief Petty Officer. He served on the carriers Antietam, Lake Champlain, Coral Sea and Forrestal as an Aviation Tech. He then moved in to blimps at Lakehurst, NJ, before transitioning in to Anti-Submarine Warfare in P2V Neptunes. His squadron was instrumental in the Cuban Missile Crisis. He retired in July, 1965, from the Admiral’s Staff, COMNAVAIRLANT Norfolk, VA. After retirement, he joined Boeing Vertol and served in Vietnam at Cu Chi for almost one year.
Warren Massey was a Mason, joining the Muncy, PA, Lodge and rising to the level of 32nd degree, recently receiving his 70-year membership pin as a member of the Kempsville Lodge in Virginia Beach.
Warren is survived by his wife, Sylvia, 88, of Dublin, Ireland, to whom he was wed on January 24th, 1953, and his four sons, Anthony, 68, of CO; Kevin, 67, of MD; Douglas, 65,of Virginia Beach, VA; and Curtis, 64, also of Virginia Beach, as well as two daughters in law, Sandra Massey of MD and Darlene Massey of CO and grandchildren, including, Brian, Angela, and James Massey, all of Pasadena, MD; Erin Massey of WA, Elyse Massey, of TX and Madeline Massey of Chesapeake, VA.
A visitation will be held from 4 to 6 p.m. on Tuesday, March 29 at Altmeyer Funeral Home, 5033 Rouse Drive in Virginia Beach. The funeral service will take place at Altmeyer’s the following day, March 30, at 11:00, a.m., followed by a brief internment ceremony at St. Mary’s Cemetery in Norfolk, VA, with full Military Honors.

Warren will be missed very much. A “Solid man” as the Irish say, he had a big and warm personality. His support for the Saint Patrick’s AOH was greatly appreciated, and he was honored with the Commander’s Cross of the Celtic High Cross Order.
Our prayers go out to his family, especially to Sylvia. Reqiuescat in Pace Warren.