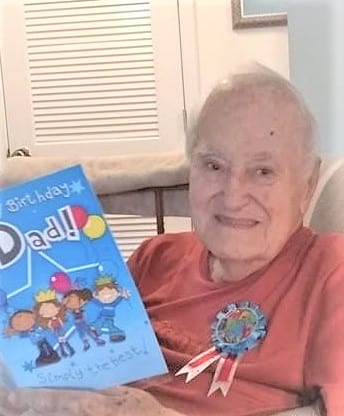 Walter “Walt” Joseph Pontbriand, 90, left this world on Tuesday, October 20, 2020, to be in the Kingdom of God.
He was born on June 8, 1930, in Worchester, Massachusetts where he played as a child, loving nature, working on his parent’s Dairy Farm and General Store, riding his horse “Prince”, fishing, and caring for the animals.
One day in 1935, when he was only five, Walt went with his dad, Joe, to deliver milk and made a stop at the home of a grieving man with a baby in his arms. When Joe returned to the truck, in tears, he told his son that the man lost his wife in childbirth and the little girl was without a mom. Walt began to cry and told his dad he wanted to take care of her.
In 1961, Walt married the love of his life, Claire Romaine Brennan. After the ceremony, Joe walked up to his son and reminded him of the day they delivered milk to the home of the little girl that lost her mommy. Walt had just married her. Little did he know back then his words of concern were so prophetic.
His love for his family was abundantly evident in everything he did. He was a thoughtful and wonderful father to his two daughters, Romaine and Monique. He was selfless and doting to Claire, his wife and best friend, until the end of her life in 2015.
Walt joined the Navy in 1951. He served during the Korean Conflict and eventually was stationed at Little Creek in Virginia Beach, Virginia. He loved Virginia Beach so much, he decided to stay and make it home and have a family. He then worked at the Ford Motor Company in Norfolk for many years.
Both he and Claire were fun loving and threw many parties at their home in Shadowlawn. On one occasion, in the 1950’s, Tommy Dorsey’s band along with Johnny Ray performed in his backyard.
Walt was a kind soul with an affinity for growing things. He had a great wit and a terrific sense of humor. Anyone that knew him, understood the joy he had for his garden, his love of music, creating stained glass lamps and artwork, nature and for people.
Although he has not been gone for long, the pain of his absence is profound, but we take great solace in the fact that he is with Claire and all those that went before.
He is predeceased by his mother, Delia Beaudreau Pontbriand, his father, Joseph E. Pontbriand, his loving wife of 54 years, Claire Brennan Pontbriand, and his son in law, CWO3 Charles S. McWhite.
He leaves behind, his daughter, Romaine Knepp, her husband Lloyd Knepp, daughter, Monique H. McWhite, many close, lifelong friends and relatives.
Thank you to the wonderful caregivers at Commonwealth Senior Living at Leigh Hall Memory Care. A special note of thanks goes to Ashley, Shafideen and Diann for the kindness and excellent care they gave him.

Am so Sorry for having missed a very good friend’s memorial service but I had no ride I remember your Mom every night in prayers and now pray for your Dad, too. He ws a man of high principles and would offer his help in any way he could.

Craig and I are so sorry to hear about Walt. He was a lovely man and we enjoyed talking with him and Clair over the years. They were wonderful neighbors. We will keep you in our thoughts and prayers.

sorry to hear of your Dads passing. Our thoughts and prayers are with you and your families. Our son Rodney Jr, always went to your mom and dads at Christmas when they lived in Shadowlawn,to play with the train under the tree. he had Ms. Pont at Seatack, he loved her. Your parents were always so kind to our Family, My mother-in-law Gladys worked at Barrs Pharmacy and thought highly of your parents.
Pharmacy and loved you Mom and Dad. We will always cherish the fond memories of your Mom and Dad.

Romaine,
My heart breaks for you, as you maneuver your way over the next days and months. Your dad led such a wonderful life, leaving so many treasured memories for you and your sister to relish for years to come. The music from the ‘rat pack’, the love story of your mom and dad, the viewfinder photo ❤️ and their never ending love for you two.
I’ll continue to be here for our talks, and when things aren’t like “budda”, know that we’ll find joy in knowing “The best is yet to come” my sister.

I can remember Walt telling stories from years ago , gardening, getting his pool ready and his total dedication to Claire…. He heaped tons of praise to Romaine and Monique…. He was extremely proud of them!!!!!!

Romaine and Monique – I am so sorry for your loss. Your parents were such a big part of my childhood, and I have many fond memories of swimming in your pool, having fun at one of their luaus and just walking up the path to see who was home. They always welcomed me with kindness. Thinking of you.

I never met your dad, but I’ve known his daughter for years, he sounds like a wonderful person, the same person I see in in his daughter, the apple doesn’t fall far from the tree, you my friend are just like your father, a wonderfully happy person to all you meet, you have your father’s heart, smile and loving personality. I send my deepest condolences to you and your family. May you rejoice in knowning that he is with his loving wife and family. Sending my love ,❤️

Dear Monique and Dear Romaine. It was always the highlight of a the trip down to VA Beach to visit my sister because it would always mean you’d get to see Walt and Claire and the both of you. He would always have bread baking and greet you with a fantastic smile on his face. He will be missed.

Romaine and Monique,
Walter will live on in our hearts and memories as a loving and giving man who was always there to lend a helping hand to us, whether it was gardening, cooking, fishing, or even babysitting. We treasure the friendship he and Claire provided and will always remember them together.

Monique and Romaine, I am so sorry to hear this sad news of the loss of your father. He was such a sweet man to me growing up and was always kind, and loved my crazy antics. He never judged me and we became fb friends and shared stories and photos. I feel very fortunate that you invited Paul and I to have dinner with both your parents a few years ago. I know Claire is with him and he will always be watching after you both. Thinking of you