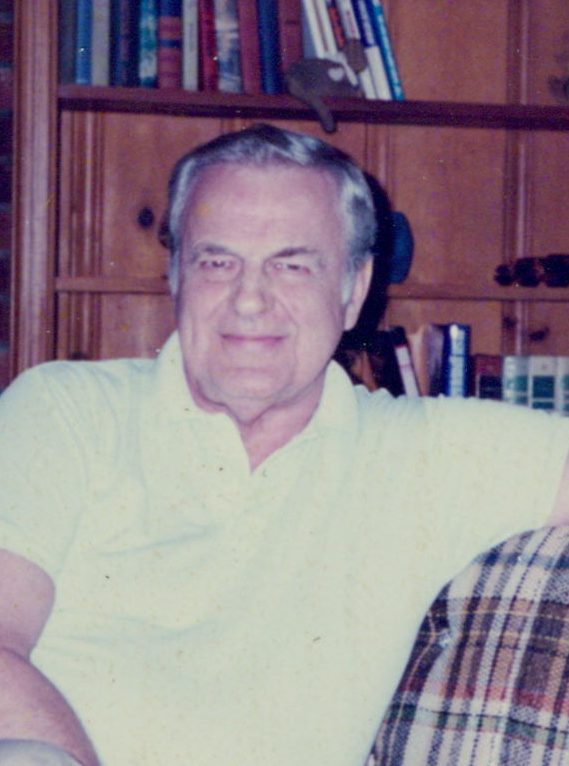 Visitation
Wednesday January 26, 2022
6:00 pm - 7:30 pm
Altmeyer Funeral Home - Chesapeake Chapel
929 Battlefield Blvd S
Chesapeake, VA 23322
(757) 482-3311 | Directions
Watch Tribute Video
On January 20, 2022 Bob Lotz passed away peacefully at the age of 95.
Bob was born on March 19, 1926 in New Richmond, Wisconsin to Verne Raymond and Edna Eliason Lotz. Bob was the second of three children and was predeceased by his sister Jean Edwards and brother David Lotz.
Bob joined the US Navy at the age of 17 during World War II and proudly served as an electrician. While stationed in Norfolk Bob met a beautiful brunette at a USO show, they married and made Norfolk their home. After the Navy, Bob began a very successful career as a Sales Manager for Libby, McNeil & Libby selling to grocery stores and commissaries. Later in his career he worked as a stockbroker for a brief time before becoming a merchandiser in the food industry. His passions included his family, golf, playing bridge and investing in the stock market. He loved telling the story of how he was born in a cheese factory on a snowy night along with antics of how he grew up as a boy in Wisconsin.
Bob is survived by four daughters, Linda Lotz Weiss(husband Paul), Sandy Lotz, Bobbi Lotz Ellington and Sharon Lotz Hendricks (husband Mike). Also left to cherish his memory are his grandchildren, Zachary Hendricks and Lauren Ellington Pfeifer (husband Kyle).
A visitation with the family is scheduled for January 26th, 2022 from 6:00 p.m. to 7:30 p.m. at Altmeyer Funeral Home, 921 South Battlefield Blvd,
Chesapeake.
In lieu of funeral services, to honor Bob’s wishes, donations may be made to Wounded Warrior Project or a charity of your choice.
8 Condolences
Inline Feedbacks
View all condolences
Heather Lloyd

Sandy, Bobbi, Linda and Sharon, keeping all of you in my prayers. Your Dad was one of the nicest people I have ever meant. It is an honor to have known him, he will be missed by so many.

Sharon, Linda, Sandy and Bobbi, my heart felt condolences on the loss of your Dad. I pray for comfort and peace during this time. May the memories of your Dad throughout your life comfort you and bring you smiles especially when you least expect it. I’m so glad that you put that picture of him up because even though it’d been many years since I’ve seen him, I remember him sitting in his chair in the den,. Share your stores and comfort each other, laughter will replace the tears.

Dear Bobbi,
My deepest condolences on the loss of your Dad. You’re in my thoughts and prayers. May God wrap you in his peace that surpasses all understanding.
Pat Jones

Dear Bobbi and all the family,
Please know that you are being lifted in prayer during this difficult time. I pray that as you travel this hard road of grief, you know that friends are here for you and the Lord’s strong arm is there to lean on.

Dear Linda, Sandy, Bobbi & Sharon~ We have many memories of our family living next door to yours on Garfield Avenue for literally decades. Praying for comfort and peace for you and your families in the days ahead.

Dear Sharon,Timmy and I are so very sorry for your loss,you and your family are in our thoughts and prayers.

May your memories of Verne Robert Lotz, give you peace, comfort and strength…