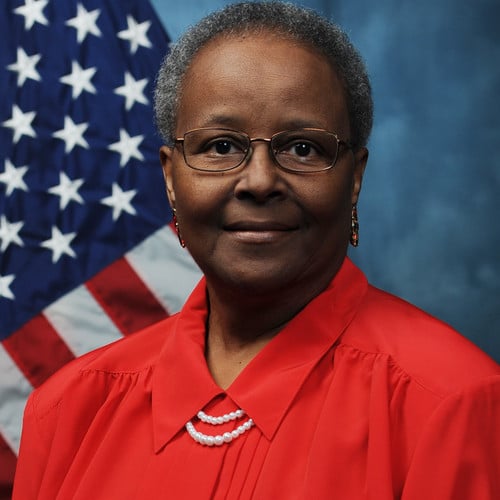 Well done my good and faithful servant. These are the words Trudy Dianne Young, born Dec. 14, 1954, heard on Nov. 8, 2022. After a hard-fought battle against heart and pulmonary issues Trudy transitioned to be with the Lord at 2:10 PM on Tuesday, November 8, 2022. Trudy was born to Floyd and Thema Merriman in Chesterfield, South Carolina, and affectionately nicknamed Roseanna to all who knew her in her early years. She would later learn, with the reminding of her big sister Leeanna, that she was in fact named Trudy. The youngest of her mother’s nine children, Trudy donned another nickname amongst her siblings, nieces, and nephews, “Fat”.

Trudy served proudly for her country in the United States Airforce. Upon her honorable discharge from the Airforce, she continued her career of federal services at Langley Airforce Base in Hampton, VA leading the cybersecurity oversight for the U.S. Airforce, totaling her service to U.S. Airforce and Federal Services of 42 years from 1978 – 2016. In recognition of her service, a conference room was dedicated in her honor.

Trudy will be greatly missed by many who love her dearly. Her memory and legacy will forever live on with those left behind to cherish her memory.

A celebration of life will be held on Saturday, November 19, 2022, 1pm at All Nations Church in Newport News, VA. A visitation will be held 1 hour prior to the funeral service.

Donations in her memory can be made to her Making Strides Against Breast Cancer team, and All Nations United in Faith.

Words can’t fully express the pain of losing a loved one; however, please know I’m so very sorry to hear of Cousin Trudy’s death.  I remember her coming to see my grandmama (Aunt Rose) and talking with her at the family reunions.

Since my mom, Dorethea Hillian Fryer (Aunt Rose’s 3rd child) died, I love re-reading the Bible’s promise at Acts 24:15, “There is going to be a resurrection.”   I along with millions of others long for Jehovah God’s promise to reunite the meek to “possess the earth” (Psalm 37:11) May the God of all comfort soothe our hearts until that promise comes true.

Condolences to the family of Trudy Young. She was a beautiful person with a heart of gold. I will miss you my Air Force sister. May God continue to comfort the family in the days to come.

A wonderful well lived life. We will always have the fondest memories in our hearts. God Bless.

For Trudy’s Family: We are so very sorry to learn of Trudy’s passing. We enjoyed working with her and Adriane at ANC. Trudy always had a smile to share and the love of Christ to spread. She had an unbelievably giving heart! We have fond memories of times spent with her. Your loss is overwhelming. Just know that she will continue to be thought about and remembered for her goodness. With our prayers and love for healing and peace.

My sympathy and healing prayers to the family. Trudy was a wonderful person to be around, so full of love and kindness. She will be missed by friends and family

May God keep you in his grace as you grieve and heal.

May your memories of Trudy Dianne Young, give you peace, comfort and strength…