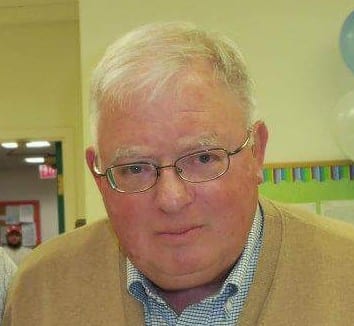 followed by US Navy Military Honors

In lieu of flowers, memorial donations may be made to:

Church of the Holy Apostles

Thomas Eugene “Tommy” Robbins, 73, passed away on September 12, 2015 surrounded by his loving family. He was born March 22, 1942 in Bostic, North Carolina to the late Clarence M. & Ruth S. Robbins. After graduating from Cool Springs High School, Forest City, NC, he attended and graduated from business school in Charlotte, NC, then attended Atlantic Christian (now Barton College) Wilson, NC.
Mr. Robbins entered the US Navy in 1965 training as a corpsman after completion of basic training. While stationed at USNH Portsmouth, VA, he trained to be an operating room technician. HM3 Robbins was then transferred to serve with the 3Rd Marine Div., Phu Bai and later Quang Tri, Republic of Vietnam 1967-1968. On return, HM2 Robbins was again stationed in Portsmouth. Upon discharge, Mr. Robbins became employed at Norfolk General Hospital and trained to be a surgical assistant, later transferring to Maryview Medical Center in Portsmouth working there as a Certified Surgical Assistant retiring in 2008 after 33 years.
Left to cherish his memory is his wife of 48 years, Alice Kay Robbins; daughters, Jeannette Robbins Stover and her husband Michael L., Sr., Kelly Hormuth and her husband Brian, & Elizabeth Aguilar and her husband Santiago; grandchildren, Michael L. Stover, Jr., Aaron Hormuth, Brittney Hormuth, & Chelsea Robbins; brother, Richard Robbins and his wife Gail; sister, Harriet R. McCall; and uncle, Perry Smith.
A Celebration of Life & Ministry will be held on Saturday, September 19th at 2:00 PM in Church of the Holy Apostles, 1593 Lynnhaven Parkway, Virginia Beach, VA 23453 with Rev. Michael B. Ferguson officiating. In lieu of flowers, memorial donations may be made to: Church of the Holy Apostles or American Cancer Society.
Condolences may be offered to the family at www.altmeyerfh.com

Kay and family. I’m so sorry to hear about Tommy. We had a lot great times at Maryview. My thoughts and prayers are with you and the girls. Valerie Roberts

Kelly and Family, We are very sorry for the passing of your father. Our heart and prayers go out to you all.

I worked with Tommy at Norfolk General Hospital. He was compassionate, friendly and a pleasure to work with. He was very proud of his family. My prayers are with you and your family. Sincerely, June Rice

We were so sorry to hear of Tommy’s passing. I worked with him as a Surgical Assistant at Norfolk General Hospital. I was also a Hospital Corpsman and at Phi Bai in 1965-66. I have many good memories of him and many good times over the years. It has been a long time since I saw him and I regret that as he was a good friend. May he rest in peace with the Lord and his Angels.

Sending much love and prayer to all of you from the Biron family.

Kay & Family. I am so sorry for your loss. Tommy was such a sweet person. Praying for your strength and peace during this difficult time.

Prayers and deep felt sympathy Liz to you and your family. LOVE to you all. Rely on our heavenly Father for strength and just One day at a time love ya xoxoox

To the Robbins family: my deepest sympathy to everyone. Tommy was a wonderful and kind hearted person. He was always so friendly and will be greatly missed.

Kelly and Family, Our family is very sorry to hear about your father. I am sad that I am not able to make it on Saturday. But your family will definitely by in our thoughts and prayers.

Kelly and family – My deepest sympathy to you and your family. May the memories of your father give your comfort as grieve this loss. You are in my prayers.