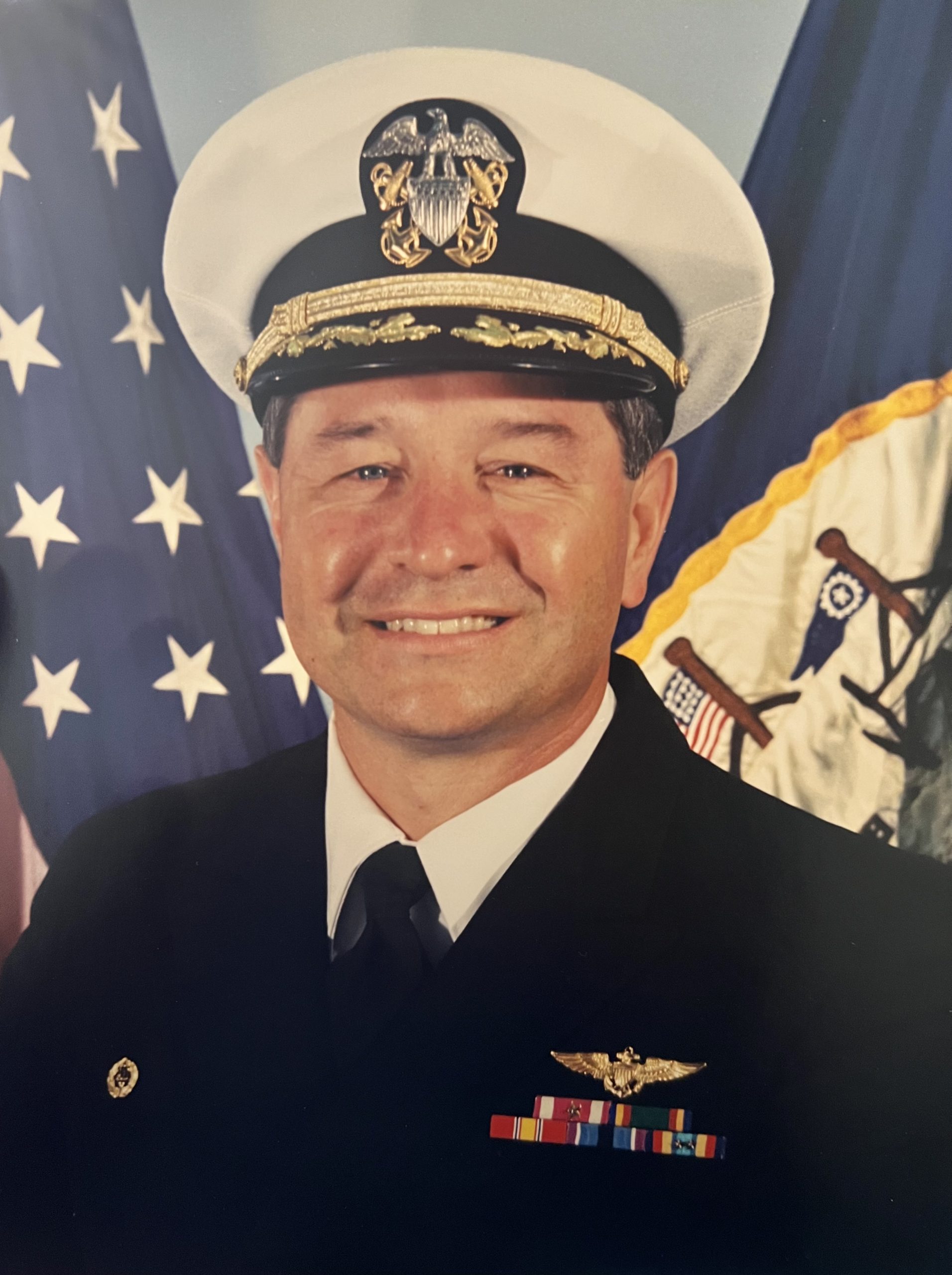 Theodore Raymond Morandi, Captain, USN (retired) was born November 18, 1949 in Ravenna, Ohio. His father, Louis William Morandi was an auditor for an insurance company and his mother, Hilda Mary Hollern was a home maker. He died unexpectedly on August 30, 2022, from a massive heart attack.
Ted spent most of his childhood in Pittsburgh, PA, where he became a lifelong fan of the Pirates, Steelers and Penguins. He lived in Buffalo, N.Y. from 8th through 10th grades, where he became acquainted with “lake effect snow.” He also played on the school’s baseball, basketball, and hockey teams. He moved to Northern N.J. for the next 2 years and graduated from Passaic High School in 1968 where he was a member of the National Honor Society and an All-Passaic County baseball player. After graduation, Ted received an appointment to the US. Naval Academy, graduating with the class of 1972 with a degree in Aerospace Engineering and commissioned as an Ensign.
In the Navy, Ted’s assignments included M-Division Officer, USS Guadalacanal (LPH-7), Norfolk, VA. A-6 pilot, VA-176, USS America (CV-66), Oceana VA. VF-43 Instrument and Out-of-control Flight instructor, Oceana, VA, V-2 Officer USS Carl Vinson (CVN-70) (Catapults and Arresting Gear), Naval Post Graduate School, Monteray, CA, Navairsyscom as Asst. Class Desk for the A-6 in Washington, D.C., Engineering and Operations Officer Nadep, Norfolk, VA, Engineering Officer Comnavairlant, C.O./X.O. Nadep, Norfolk, VA, and Force Material Officer, Comnavairlant, Norfolk, VA.
Ted retired from the Navy on Oct 12, 2000. Following his Naval career, he worked for Titan Corporation and L3 Communications as a Senior Director and Vice President, supporting Naval Aviation engineering and logistics. In July 2012 Ted’s sector of L3 was spun-off as Engility Corp. from which he retired.
After retiring, Ted remained a loyal Navy football fan. He and his wife, Debbi, could be found at most home games tailgating with his 6th Company classmates and their wives. He was also an avid golfer and was YFC (Your “Friendly” Commissioner) of the BOMGA (“Basic” Old Men’s Golfing Association). He also golfed regularly with the Virginia Beach Seniors Association.
Ted is survived by his wife, Debbi, their children, Tim Morandi and Karen Clark, Lauren Inskeep and husband Jason, Kate Morandi Dickens and husband Mark, Kristen Jones and husband Bill, Meesh Rhodes and husband Sean, Michael Kasama and wife Brittany, Sarah Letts and husband Steve. He also had nine grandchildren: Joe, Lexi, Madison, Audrey, Marc, William, Penelope, Lucille, Hudson and baby girl Dickens (on the way).
Ted brightened the lives of many friends and relatives and will be missed by all of them.
A celebration of Ted’s life will be held on Thursday, November 3, 2022 at 2:00 pm at Altmeyer Funeral Home, 5033 Rouse Drive, Virginia Beach, Virginia. Condolences may be left for Ted’s family below.

Debbie and Family, my deepest condolences to you. I was so saddened to hear of Ted’s very unexpected passing. I knew Ted for many years as a member of the BOMGA Golf Group at Oceana & also the Virginia Beach Seniors Golf Group. Ted was always a pleasure to be around and will be greatly missed by all who knew him. May he Rest in Peace and God Bless you all.

Debbie, you and the family are in Kathy and my thoughts and prayers. It didn’t matter if we were at work, on a golf course, or at a football game (Go Navy Beat Army!) Ted was always the guy we were happy to be with.

Deb, you and your family are in my prayers. I’m so sorry for your loss. Felicia

My condolences to Ted’s family and other friends. Treasured golfing and working with him inVBSGC. FAIR WINDS AND FOLLOWING SEAS old friend

I am sorry to hear that Ted passed on. We had first met in VA-176 and occasionally after that in Crystal City. I will surely miss him. My deepest condolences to you and your family.

May god bless you all .

So sorry to hear of Ted’s passing. We were shipmates (Cats/AG) and roommates onboard USS Carl Vinson (CVN-70) 1981-83. Great guy and exceptional leader.

I am sorry to learn of Ted’s passing. I recall him with great respect from our Aero classes. Our paths parted after USNA. Harold Hall 36th Company Class of 72

It was my distinct pleasure to work with Ted during the latter years of my career. He exemplified the words officer and gentleman; a true professional. My sincerest condolences and hearfelt prayers go out to his wife Debbi and the entire Morandi family.

Thoughts and prayers are with you during this difficult time