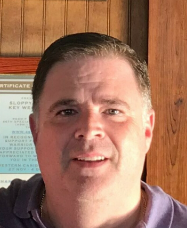 Terry L. Whitehurst passed away on March 28, 2019 in Chesapeake, Va. Terry was born on November 23, 1970.  His adoptive parents were Vernon Lee Whitehurst, Sr. And Catherine Cuthrell Whitehurst. He was a graduate of Old Dominion University.
He is survived by his wife of 22 years, Kathi Whitehurst , whom he called “K” and their two children, son Chase (18 years old) and daughter Christina “Chris” (12 years old). He was a very dedicated father as family was most important to him.  Terry’s favorite team was The Carolina Panthers and he rarely missed watching a game with his son Chase. They also enjoyed vegetable gardening together and planted a garden in the back yard together. He also enjoyed cooking with his daughter Chris. One of their favorite dishes to prepare was lima bean soup and he would always call her his “mini-me”.  One of Terry’s favorite memories was his last family trip to Key West. This location held a special place in his heart and he spoke of it often. He has been in the automotive business his whole life but with Priority Automotive Group for the past nine years under the tutelage of Keith Dennis, his GM and mentor.   Jim King was also a big part of his life, at Priority, when it was work related, he was “Jim” , when he needed advice and his friend, it was “Dad” and Jim knew which hat to wear. He is also survived by his best friend of 21 years, Peppi Bonocore. He always said “his brother from another mother.”  They definitely had that brotherly relationship, arguing one minute, buddies the next, but lifetime friends! Terry became a Master Mason in October of 1992.  He belonged to Kempsville Lodge 196 and was also a Shriner member of Khedive Temple in May of 2002, an accomplishment to him! He was a Christian and member of Community United Methodist Church, Great Bridge Free Will Baptist Church, Metrolina Church in North Carolina, and Waters Edge Church (WEC) Hampton.
A service will be held at 7:00pm on Tuesday, April 9, 2019 with the reception to follow at  Altmeyer Funeral Home, Southside Chapel, 5033 Rouse Drive, Virginia Beach, Va 23462.
In lieu of flowers, please click HERE.

Needless to say the news of Terry’s passing was a shock to us. Terry was the Chaplain at Kempsville Lodge when I affiliated. We went through Scotish Rite and in to Shrine together and became Motor Corps members together. We some great times together but lost touch when he moved to the Charlotte area. We had recenly re-connected online after he returned to Virginia however we were in Florida! So sorry for his loss and our prayers are with Kathi, Chase and Christy. May you be at peace my brother.

We had so many great times together. Whether it was cooking out, playing cards (he never could win Grandma’s Game!), or just discussing the day’s events, Terry was an ease to converse with. It’s hard to believe that we had been friends for 20+ years! From the first car he bought from me in the late 90’s, to the eventual meeting of our families, Terry’s loss leaves a huge hole in our lives. Saying he will be sorely missed is a huge understatement. That’s the tough thing about the car business… you have many acquaintances you call friends, but you only have a few real friends. Those friends are like family, they become your family. I have truly lost a brother. I pray you rest in peace Terry Whitehurst.

We are so sorry for your loss and will miss him terribly. We will always hold those cherished memories of our dinners together and hanging out at our house and always talking business which was an ongoing joke with Kathi and I . But that was Terry and really we wouldn’t have had it any other way. So many wonderful memories together is all we could really want and we certainly have that. Terry was one of a kind which was his specialty. That’s what made terry who he was. Rest in peace TERRY WHITEHURST.

He was always so friendly and out going