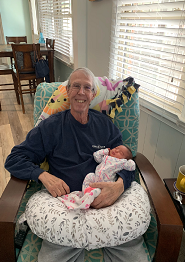 Terry Phillips, fought the good fight against cancer for nearly two years until that battle came to an end on March 17th, 2022. He was surrounded by his family when he passed, just as he wished to be. Terry was born in Portsmouth Virginia on July 18th, 1957, to Edward and Jevelyn Phillips. Terry grew up in Portsmouth, and graduated from Craddock High School in 1975. He spent 37 years working at Norfolk Naval Shipyard starting in shop 38 as an outside Machinist, and later moving to code 133 as an inspector before becoming a trainer and concluding his career as leading the training program for 133. He retired in 2015 and moved to Virginia Beach where he enjoyed spending his retirement fishing, riding his bike down the boardwalk, people watching, and spending time with family and friends. Terry was not active in Church but was a Christian who spoke with God daily. As much as he did not want to leave this world of family and friends in his last days he had faith that he would be visiting his Mom and other family and friends that had passed before him when he left us and that we would see him again soon.
Terry was fun, compassionate, honest, smart, hard working, and a little weird in a good way. His family and friends are so thankful for everything he taught them, his love, his friendship, and the example he set for his family.  One of the most loved traits of Terry is the way he treated everyone with the same love and respect from the janitor to leadership. He didn’t care about what you did, who you knew, your gender, race, orientation, how much money you made, or what you could do for him, he only cared if you were a good person. He truly believed in the golden rule of treating others the way you would want to be treated. He would do anything he could for anyone that needed help. If you are reading this he cared about you, and you were important to him. His family would like to thank you for your part in Terry’s life and tell you we are sorry for your loss as well. Terry was a Dad, Grandpaw, father-in-love, son, brother, uncle, and friend, loved by many. He is leaving us much too young, and will be truly missed.
His wish was not to have a funeral or a viewing but a more casual Celebration of Life on the Beach. He wanted people to remember him the way he was when he was healthy and full of life. His family is currently working to plan the Celebration of Life in the coming 1-2 weeks, and will inform everyone through the Facebook group page when when it is planned.

Please feel free to share any positive stories, pictures, videos, or leave condolences for our family on the “See you later, a tribute to Terry Phillips” Facebook group page.
On behalf of the Phillips Family thank you for the love of family and friends. If you feel compelled to send flowers, Terry would have preferred for you to send a donation to one of his favorite charities either Hooked For Hope or the Roc Solid Foundation in his honor.