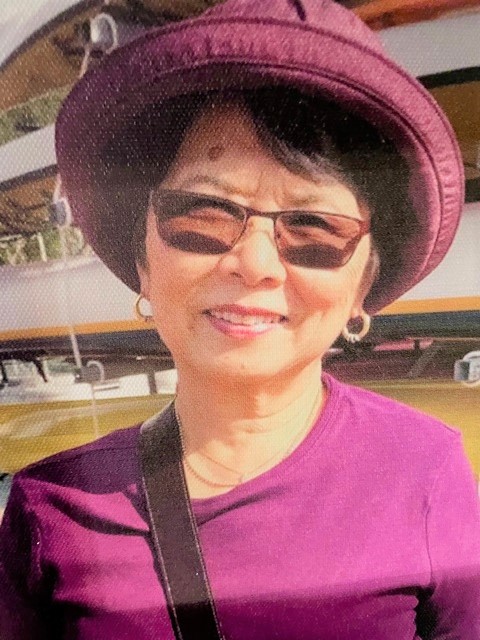 CHESAPEAKE – On Wednesday, April 27, 2022 Taeko Thorpe, 82,  passed peacefully surrounded by her loved ones.  Taeko was born in Sasebo, Japan to the late Shinichi and Harumi Honda.  Taeko emigrated to the U.S. in 1962 and four children later, they moved to Virginia Beach in 1968.  In 1973 she divorced and she remarried to Walter Thorpe in 1976.
Life changed for the better after she married. She was a homemaker and active for many year in her Japanese social club, Sakura-Kai. She later worked at Raytheon Technologies and retired after 19 years. She enjoyed gardening, cooking, but her greatest passion was spending time with and caring for her family, especially her grandchildren, and her fur babies. She was the center of her family universe. Her house was the Grand Central meeting and social hub. All who knew her loved her. She loved to travel and did so extensively going all around the world cruising the rivers of Europe, China, and Alaska with Wally.  She frequently visited her home country, Japan, with her children and grandchildren sharing her culture and  roots.
Taeko was predeceased by her husband, Walter Thomas Thorpe in 2019.
Left to cherish her memory are her children, James Dills (Tong) of Davenport, FL, Miyuki Edwards (John) of Chesapeake, Thomas Dills of Chesapeake, and Chiaki Ubel (Dan) of Moyock, NC; grandchildren, Aiko, Allan, Derek, Misa,  Austin, Thomas,  Bailey, Kristen,  Daniel,
great grandchild, Dougie, and her beloved fur babies, Spike, Momo, Peanut, Niko and Jasper, and a host of other family and friends.
A celebration of life will be held at Altmeyer Funeral Home in Chesapeake on Saturday at 1:00 pm with Pastor Jerry Alford officiating.
In lieu of flowers you may donate to the SPCA of Chesapeake, in honor of Taeko Thorpe.

My heart ❤️ goes out to Miyuki and her whole family. Your momma was truly the best! You will have so many memories of beautiful times to remember forever. Momma created a beautiful family. All of you are who you are because of your moms wise wisdom and Japanese ways. We will all miss her but hold wonderful memories- Love you

Taeko was my best friend for over 35 years. We met thru work at Raytheon and immediately became friends for life. We could talk about anything from politics to the weather. Taeko was very kind and thoughtful, but she feisty and humorous. We went on so many wonderful lunches together and with our Raytheon crew. This really hurts me too my core, I am truly going to miss her. I know she is now in heaven with Wally. Thank you Taeko for the wonderful memories that I will hold close to my heart and cherish forever. My love and prayers to the family. God Bless

Where to begin , the Thorpe home was like my second home for my teenage years. Mrs. Thorpe welcomed all into her home and treated us kids with Japanese crackers , which I still eat to this day. And my other things , but mostly she shared wisdom with us. And let me tell you we needed so very bad God Bless her and the Thorpe and Dills family , she was a great Mother to her family .
I did turn her on to Barry Manilow which see loved his songs . Mrs Thorpe was a lady in true respect , I enjoyed her company so very much in those years , Thanks Mrs Thorpe , thanks for letting me into your family’s life, I love all my memories with them and you.
God bless

I am sorry to hear of Taeko passing. I have so many memories of her from when I was younger, she felt like family to me. I can still see her and Wally with their dog Brandy, whom I could tell brought so much joy to them. My heart goes out to her loved ones, I am keeping them in my thoughts and prayers.

I have known Miyuki from 1974 and Jimmy and the rest of the Thorpe/Dills family from 1981. Mama Thorpe was always a special light and strength. She met my wife Hiromi when she came to visit Jimmy in Japan. Every time we visited Virginia she would invite us by the house and cook a Japanese meal for my wife and I and then later our daughter. She was truly a person the family was built around. We all loved her deeply and will miss her greatly. She was an inspiration to all. We send our Love and support to the family and we are sorry that the timing will not allow us to be there in person. Love and Prayers, Keith, Hiromi, Nikki and Mary Bryan

We have a lovely memory of a cookout last summer at her Granddaughter (Aiko Moore) & her husband( Billy Moore) our Grandson…home in Washington N.C..It
was a wonderful time with her family and enjoyed the loving stories of all the relatives and events they had together thru the years.