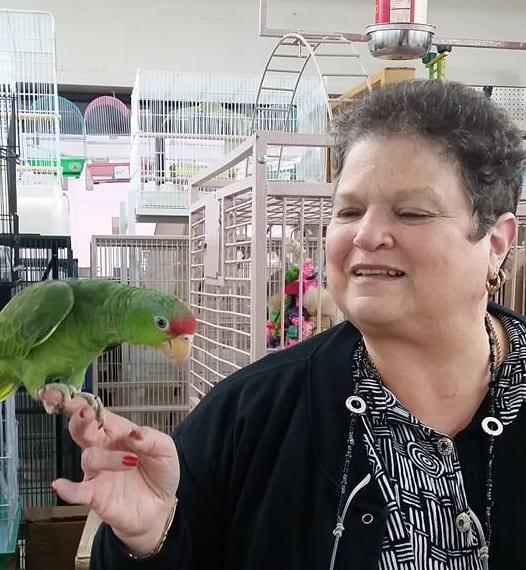 Susan Katz, née Feuerstein, passed away on Saturday, November 14th, 2020. The daughter of Nathan Feuerstein and Lillian Nelson, Susan was a Norfolk native. She was born at Norfolk General Hospital and attended Norfolk public schools, graduating from Maury High School in 1964. She received her nursing degree from the School of Professional Nursing at Norfolk General. She worked as a pediatric nurse at King’s Daughters Hospital before moving over to the Labor and Delivery Unit at Norfolk General for the remainder of her career. She delighted in assisting with thousands of births at the hospital and took special joy in delivering the babies of adults whom she had delivered at their births. In 1967, she married, and was later divorced from, Robert Katz with whom she had two children.
In the late 1990s, Susan created a childbirth education business and billed herself as the “Stork Lady,” where she worked with hundreds of couples preparing for delivery. She also served as an expert medical witness and was a trained bereavement counselor. In her retirement, Susan volunteered at Jewish Family Service and at the Ohef Sholom Soup Kitchen. She also took classes in Jewish education from the Melton Adult Education program.
Susan was extremely lucky to have many lifelong friendships through her Maj Johng family and Sister’s Group.
Susan loved animals and was always surrounded by dogs, cats, or birds. Her beloved standard poodle Clancy was waiting for her to come home.
Susan is survived by a son and daughter-in-law, Neal and Jennifer Katz, of Tyler, TX, along with her three grandchildren, Micah, Lila, and Rebecca. She has numerous cousins, a sister-in-law, and nephews around the country.
Susan is predeceased by her sister and brother-in-law Marsha and Lester Goldman, her brother Stephen Furst, and her daughter, Robin Katz.
Rabbi Rosalin Mandelberg of Ohef Sholom Temple will be officiating the private graveside ceremony at Forest Lawn on Tuesday, November 17th at 10am.
The service will also be available live on Zoom for anyone who wishes to join with a password. To register for the Zoom service, please visit LifeOfSusan.com
Memorial donations may be made to the Ohef Sholom Temple Soup Kitchen (ohefsholom.org) or to a charity of your choice.

I first met Susan when she joined our Hospice Volunteer Program.

We will always remember Susan for her wonderful sense of humor, kindness to others and love for animals. As a member of HPCT’s Volunteer Program she will be missed, and we are all deeply saddened to learn of her passing. Sending condolences to Susan’s family at this difficult time. Please know we are holding you all in our hearts.

I grew up knowing Susan. I hadn’t seen too often in the past few years but we had many mutual friends. She went thr

Have known Susan for years and am very saddened not only by her death but also for the 30 + days she had to spend and her not being able to be with Robin in her time of need. She was a very caring person and will be missed by all!

Susan added so much life to our Norfolk General family in L&D. She had a way of making the most difficult nights more fun! You will be missed my friend. Condolences to the family.

Susan was a true friend and the life of our night shift at Norfolk General. I will always treasure the time we worked together. Condolences to the family. You will be missed my friend I have thought of you often over the years.

So very saddened to hear of Susan’s passing. I worked with her at Norfolk General Hospital for 15 years & lived in the same neighborhood where our children went to school together. She was a kind woman & always had everyone laughing with the stories she told. She will be missed by all who knew her. Condolences to her family.