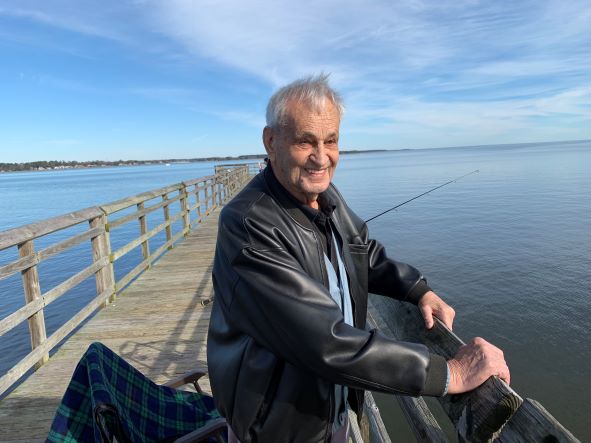 Send FlowersPlant a Tree
Steven Haklits, 94, passed away peacefully in the arms of family on January 10, 2022 in Williamsburg, VA. His life, both humble and epic, was marked by love of family, deep faith, and fierce Hungarian-American pride.
Steve cherished his parents (Franziska & Istvan), siblings (Frank, Ilonka and Vincent) and their families, and life on the family farm in the close-knit Hungarian village of Szentpeterfa – where friends were family and family were friends. Steve’s bachelorhood ended in 1964 when he met his future wife Trudy Nagiller at the Lorelei in Manhattan. Married for 33 years, the couple pieced together the American Dream of owning a home, raising daughters, Maria and Andrea, and sending them off to college.
To provide for family, Steve worked hard. His workday started at 4:00 a.m, toasting larded rye bread over the burner, braving all weather on the walk to the subway, working in the frigid conditions that butchers and sausage makers typically do – and then arriving home, whistling a tune and never a complaint. Life took the family from Brooklyn/Queens, NY to Pembroke, NH, north to Augusta, ME and finally, Granby, MA. The family enjoyed summer trips to Europe and time spent with Trudy’s family from Austria. One of Steve’s proudest moments was walking his daughter Andrea down the aisle on her wedding to Todd Bessette. After Trudy’s untimely death in 1998, Steve moved to Newport News, VA. Steve’s family threw him a going away party. Being surrounded by family, cousins and friends known since birth was his definition of happiness. In Virginia for 14 years, Steve enjoyed the warm weather, carefree condo life, and time with Andrea and Todd’s family which had grown to include sons, Seon and Li. Steve loved fishing and soccer, and to his delight, his grandsons did too. Steve’s greatest desire was to gift his children a home and funds. He lived his life sparingly to achieve that goal.
Steve’s love of church was inspired by his mother, who attended mass daily, and perhaps the lure of delicious meals often served up after Sunday service by the parish matriarchs of St. Stephen of Hungary in Manhattan. Recently, Steve was a communicant of St. Jerome’s in Newport News and St. Bede’s of Williamsburg. Steve’s cherished possessions were a wooden crucifix and his mother’s rosary beads which gave him comfort. They were his sole belongings upon leaving Hungary as a refugee in 1956 on his journey to the United States. Through the years, Franziska’s rosary beads would hang from the rearview mirror of Steve’s car. He credits this (and his superb driving skills) for his 64-year driving record without accident. Which was surprising, because Steve liked to test the limits of his pride and joy – a 1950s Buick Rivera – and race the family sedan over the dips of the boulevards in Brooklyn and Queens.
No story of Steve’s life would be complete without mentioning his Hungarian/Croatian pride. He loved singing the folk songs. Tears would well at the sound of the Hungarian anthem. The colors of the Hungarian flag were found around the house. He was wild about Tokaji, and famous for his Gulyasleves which he would dish out with the promise “Make you strong, like bull.” He loved his homeland with heart, and soul, and her release from foreign control was a significant moment in his life that was scarred by war and military occupation. Steve was equally proud to be American. He embraced life in the U.S. from the moment he arrived from the harrowing transatlantic voyage in February 1957. Time and again, he would pull out his citizenship papers and repeat the inscription thereon.
Steve’s life was a study in contrasts: He was both farm boy and urbanite. Basic education was a struggle but he conversed in 5 languages. His strength was Herculean, yet he was gentle to all. He championed no causes, but was “green” to the core. He hated presents but loved cards. He was utilitarian and spartan, but decorated in a riot of colors and flowers. He disliked the beach but loved the ocean. He went to bed early, but could party to the wee hours with the best friends in Ridgewood. He was plagued by anxiety, but quick to adventure. He had the blessing of long-life and the pain of outliving loved ones. A man of few words, he could story-tell and charm without effort. His temper over the trivial could be quick, but he faced calamity with unflinching stoicism. He protested vacations but had a ball cruising to Mexico. He claimed no special talent, but could console the inconsolable. He had a sweet tooth, living on cheesecake and French Crullers, but maintained the perfect weight. The list goes on . . .Steve entered his 94th year, ramrod straight and self-reliant. And, in his final months, when he could do no more, he let go and let God.
Andrea will host a celebration of life in her home on Sunday, January 16 at 5:00 pm. For friends and family planning to attend, please RSVP to Andrea by text, or Maria by phone, text, email or Facebook message. The family will provide notice of the Mass to be read for Steven and the future interment ceremony. In lieu of donations or flowers, please share your fond memories of Steve or remember his spirit in any Zinnias you plant, Hungarian cuisine you enjoy, or fishing line you cast to the sea.