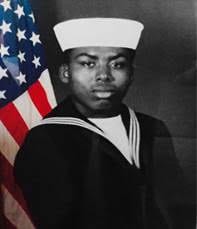 Spencer Nokomas Cooper Sr, was born on February 18, 1974 in Newport, Arkansas.  He was the 1st child born to Pamela Cooper (Matthews) and father Johnny Lee McDonald. As a child, he liked sports such as baseball, basketball, and he loved to hang out with his friends.  Concerts were also among one of his hobbies / interest. In September of 1992, Spencer joined the United States Navy which brought him to where he would meet his one true love, the chicken big mac during his time in Bahrain. During Spencer’s years of military service, one duty station in particular – NTC San Diego – would change his life forever. On New Years Eve 1994 in Tijuana, Mexico, Spencer met his beloved treasure- Victoria. The start of a beautiful forever began. First came love, then came marriage, then came baby carriage, after baby carriage, after baby carriage.  In San Diego, he met many friends that also served in the military and he always kept in contact. Military orders soon relocated the family to Virginia Beach, VA. It was here where he hopped on his bike and made the commitment to “Ride Derty Ride!” Founding member Derty Boy Spen loved to spend time on the road as long as only two wheels were involved. He was not a fan of water, but paid the price for our freedom. In September 2012, after 20 years of active duty service, Spencer retired as Yeoman YN1. After retiring he went to barber college where he loved to cut hair and give advice, like any barber would do. He was known to all as a well grounded family oriented man who brought out the best in people. He was a man of his word. He helped anyone in need. If you needed help “Big Homie” had you. He said what he meant and meant what he said. He was a generous, laid back, caring, devoted, handsome man with a beautiful soul. He joins his grandparents that preceeded him in death Rosie and Henry Cooper and Henrietta McDonald and Jesse Lee Heard. He is  survived by his wife-Victoria;  children-Cierra, Spencer Jr., Mahalia, and Tyson. His parents -mother Pamela Matthews and Billy Matthew and father Johny Lee McDonald and Reva McDonald. His brothers Stefan Cooper, Johnny McDonald JR, Timmy McDonald and sister Dana Nevels and  Gigi Burns. He will be dearly missed by a host of aunts, uncles, cousins, nephews, nieces, framily, and friends.

A wonderful man of wisdom at a young age. Always a word of encouragement for others and a strong example of what men should strive to become. I’m saddened to know you are no longer here. I pray God’s blessings and comfort on his beautiful family. RIL

This is your cuz George in Arizona. Me Gloria and the kids miss you. I will always remember all the great times we had as kids growing up in Arkansas. We both came a long way and both us had successful Navy careers. Our prayers are with your family. Rest in peace. Love ya man.

Rest easy Spencer…. You will be missed…. All the way from San Diego to Virginia you were my friend… I just wish I could have been there in the end…. Condolences to your family …. And once again you will be truly missed

I was sorry to read about your loss. May God’s word at Psalm 34:18 & 55:22 bring a measure of comfort, which states he will mend the brokenhearted & he will sustain you during this difficult time.

My condolences to the family. Find strength in God by turning to him in prayer. God can supply the curative comfort that is needed. Praying to God, along with seeking to learn and to do his will, will certainly bring healing to the aching heart. Psalm 46:1 says: “God is our refuge and strength, a help that is readily found in times of distress.”

Met him a few summers ago on 2. Always had a big hug for me and a handshake for my husband, and words of advice as well as jokes to go around. The world has lost a remarkable man and a remarkable friend. Deepest condolences to the family.

My condolences to the family of Spencer Cooper. I have known Spencer for over 30 years and I still can’t believe he is no longer with us. I will always remember the days when he, his brother Corky and my brother would hang out playing various games on the Nintendo or just being boys. I am so proud of the man, husband and father that you turned out to be. It was great seeing you a few years ago, you will be greatly missed. My prayers are with your family and friends as everyone moves on through this life without you. See you in heaven and rest well my friend.