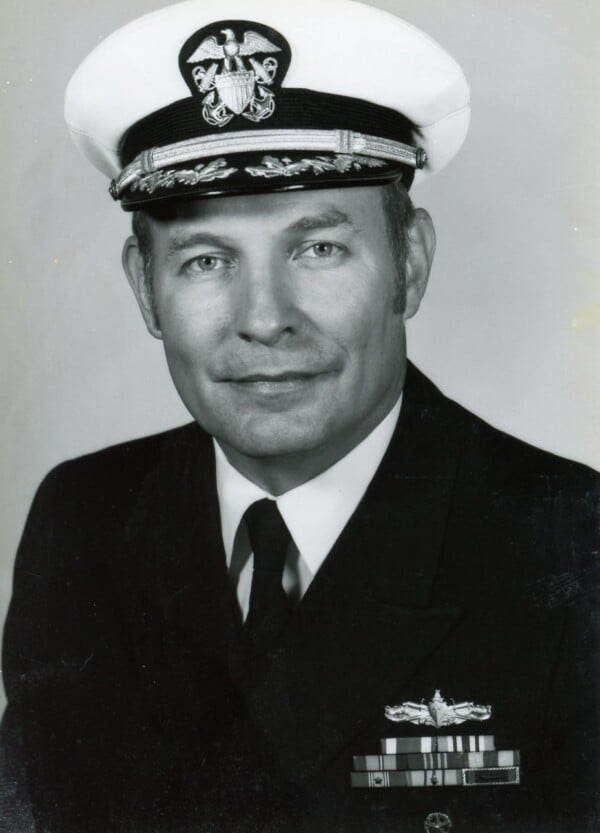 Shane Patrick Daniels, Captain, USN, retired, passed away Thanksgiving Day, November 24, 2022, after a long, defiant battle with Parkinson’s Disease.  Shane was born in Cincinnati, Ohio, on April 23, 1935, and grew up in the nearby town of Mariemont.  He was predeceased by his parents, Patrick and Joan (Dokter) Daniels and a sister, Patsy.

Shane was quite an athlete in his younger years, and with his teammates won the Ohio State Basketball Championship his senior year at Mariemont High School. He received a full football scholarship to the University of Cincinnati, attending one year before his appointment to the U.S. Naval Academy, where he played football and ultimately graduated in 1958.

Shane attended the Naval Postgraduate School in Monterey, CA, graduating with a Master’s degree in Meteorology. In addition, he attended the Naval War College and the National War College earning a Master’s degree in International Affairs.  Throughout his 30-year naval career, Shane had twelve overseas deployments during which he served as commanding officer of an LST and guided missile destroyer.  His past staff duty assignments included tours as Force Planner for SACLANT, Surface Operations Officer for Commander Carrier Group FOUR, Operations Coordinator for CINCUSNAVEUR, and commander of Fleet Operations Control Center, Europe.  His awards included the Bronze Star with Combat V, two Meritorious Service Medals, Joint Service Commendation Medal, and the Navy Commendation Medal.

After retiring from the Navy, Shane settled in Virginia Beach using his knowledge of coins and passion for history to start a small antiques and collectibles business. In the 1980s and ‘90s he was well-known throughout the area for his estate tag sales and antique appraisals.  Shane loved sharing his vast knowledge with anyone who was interested.  He continued collecting and conducting estate sales until the effects of the disease made it impossible, then devoted his time to his grandchildren, reading books about American and Naval History, playing Sudoku, and eating ice cream (he loved ice cream). Shane was grateful to be able to spend time with his grandchildren as they grew up and was exceedingly proud of them; in turn they loved him immensely and all share his passions for ice cream and animals. Over the years he passed on many important lessons to each of them, most notably to never quit when things get tough; to always take the high road, no matter what; and it doesn’t matter who wins…as long as it’s a good game. He was, above all, a good husband, father, and grandfather.

Shane is survived by his wife of 60 years, the former Margaret (Peggy) Lesemann of Charleston, SC, son Shane Daniels, Jr. (Christie), daughter Lynne Murrell (John), grandchildren Hanna, Shannon and John Murrell and Sara Daniels, and brothers Richard (Kristina) and Kent (Patricia).
A memorial service will be held at 11:00am on December 17, 2022, at Altmeyer Funeral Home, 1801 Baltic Avenue in Virginia Beach.  In lieu of flowers, please consider a contribution in his name to the Parkinson’s Foundation, Plaza Volunteer Rescue Squad in Virginia Beach, or your favorite animal charity.

Captain Daniels, I had the good fortune to be assigned to FOCCEUR from 1982 to 1986; I recall you were a good and fair skipper.

Fair winds and following seas,
may forever you feel, upon your cheek, the salty breeze.
Your spirit lives on in many a heart,
your words captured, and never to depart.
May your loved ones have the comfort in knowing,
to heaven is where you are going.
For all that they have to do is look above,
and they will be reminded of your love.

From one shipmate to another, I wish you Fair Winds and Following Seas.


Eternal Father, strong to save,
Whose arm hath bound the restless wave,
Who bidd’st the mighty ocean deep
Its own appointed limits keep,
O hear us when we cry to thee
For those in peril on the sea!

Eternal Father, guard our dead,
For whom his shipmates bow their heads,
Receive him now his labors cease,
And grant Captain Shane P. Daniels eternal peace,
O hear us as we lift our prayer,
For promised rest and loving care.

O Christ!  Whose voice the waters heard
And hushed their raging at thy word,
Who walkedst on the foaming deep,
And calm amidst its rage didst sleep,
O hear us when we cry to thee,
For those in peril on the sea!

My condolences to his family. I was a crew member of USS Benjamin Stoddert a ship he commanded. I did not know the gentleman but have the utmost respect for his service to his Country. Please accept my hand salute for such a Patriot.

Peggy, so sorry to hear about Shane. I wish we had lived closer and been able to know him. To us out here in Arizona, he was larger than life, commanding a naval ship, being stationed across the world, and earning medals and awards. I was just remembering your beautiful wedding, when I was just a little girl. Thinking fondly of you and the family. Patti

May your memories of Shane Patrick Daniels Sr., give you peace, comfort and strength…

I was diagnosed 2011. i was diagnosed with Parkinson’s disease. My symptoms progressed quickly. Soon i was having difficulty breathing, swallowing and even walking short distances. With the help of Health Herbs Clinic natural herbs I have been able to reverse my symptoms using diet, herbs, which i feel has made the most difference. The Parkinson’s natural formula immensely helped my condition, it reversed my Parkinson’s. my slurred speech, then the tremors, and mobility gradually disappeared, even my handwriting is getting better, I’m now playing golf again. and i turned 69 next month. i am glad to get my life back DON’T GIVE UP HOPE!!! Visit HEALTH HERBS CLINIC via their official web-site healthherbsclinic . com people are suffering from this horrible disease due to lack of information.