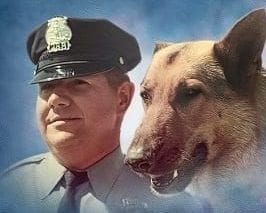 Sgt. John “J.T.” Drumm, Jr. Ret. passed away peacefully while surrounded by his loving family on June 23, 2020. John was born in Philadelphia, Pennsylvania to the late John Sr. and Stephanie Drumm on April 5, 1937.

John was energetic, adventurous & had a sense of humor that would leave you on the floor. He could light up a room with his ‘baby blue eyes’, perfect smile & his presence was always the life of the party.  As a child he traveled the country as his Father was in the UDT & LCDR in the US Navy. JT Drumm, Jr. was an original “Navy Brat’. His cultural experiences made him more resilient than most civilians, which suited him well for public service with the Norfolk Police Department as a 34-year veteran. He retired as a Sergeant earning the respect and admiration from the community he served. He was the strongest & bravest man that you could ever meet, but sweet on the inside once you got to know him, anyone that shook his hand knows what I am talking about.. He was one of the toughest SOB’s you could ever meet but was kind & gentle when he needed to be.
John appreciated the outdoors & spent much of his retirement going to his beach house in Corolla where he enjoyed fishing & riding his ATV. There were moments to relax as well with friends in the NC sunshine with his beloved wife Nicky. He spent many days & weekends fishing on The Chesapeake Bay & scuba diving with buddies on ship wrecks in the Atlantic Ocean with many adventures as well as shark encounter stories. He definitely could tell a story or a great joke and you would feel like you were right by his side during his adventures. John spent summers in Texas with his Grandparents, where the love of the outdoors took root with many adventures, hunting, fishing & farming with his Uncle and family.
Other than his parents, John is preceded in death by his loving wife & Western Kentucky University college sweetheart, Mary “Nicky” Grace Drumm.
Left to cherish his loving memory are his sons, John Drumm III & wife Julia, Steve Drumm and James Michael Drumm; grandchildren, Nicholas Drumm, Matthew Drumm, Ryann Drumm and Daniela Edick & husband Colin; brother, Wayne Drumm & wife Barbara; sister, Roxanne McCarthy & husband Thomas; former wife and best friend, Ellie Emerle; many more extended family members and friends.
J.T.’s memorial service (or celebration of life) will be held on Wednesday, July 1 @ 11:00am at Altmeyer Funeral Home Southside Chapel (5033 Rouse Drive, VA Beach)

As a Father he was strong & kind and we know he did his best. It was not easy for him but he did all he could, more sacrifice than he should & never asked for anything in return for his generosity & kindness. He was different from the rest, when his boys became men they took their  Father by the hand and soon the world would know the influence of his guidance & love.

This man left a lasting impression on me as a young kid. I wish I could have stayed in touch with him.

I lived next to John for close to 15 years he was a great guy and I was Nicky as well Rest In Peace John.

I lived next door to John for close to 15 years, he was a great guy and Nicky was a special Person as well Rest In Peace my friend.

John was my Sergeant in the Gold Sector when Waterside first opened. He always had a great sense of humor and me being a new officer, he was a pleasure to work for and made the job fun. Rest In Peace John, know that you were well thought of and will be missed.

John was a wonderful police supervisor and a pleasure to work with and for. He will always be in my thoughts. Enjoyed working with him at the old fourth and again in the 2nd. Robbie.

We are very sorry to learn about John’s passing. I last spoke to him on his birthday; John was a month older than myself. Know he will be happy to be reunited with Nicky and my Aunt Grace.. Nicky was my only MacKavanagh cousin. May they all rest in peace.

John was one of our dearest friends. Always had a joke to tell. Remember him at our Christmas parties with Nicky. Wonderful couple. We will truly miss him. RIP with Nicky, Drumm.

I was one of the young fellows who joined at the age of 19 when the age was lowered. Many hated that policy and showed it by treated us badly. Sgt Drum was one kind man and it was very good to feel that a veteran Police Officer was OK with us young fellows and was willing to show it. Sorry to the family for the loss.

Worked with John at the old 4th pct. in he 60’s a good man I am sure he will be missed. RIP