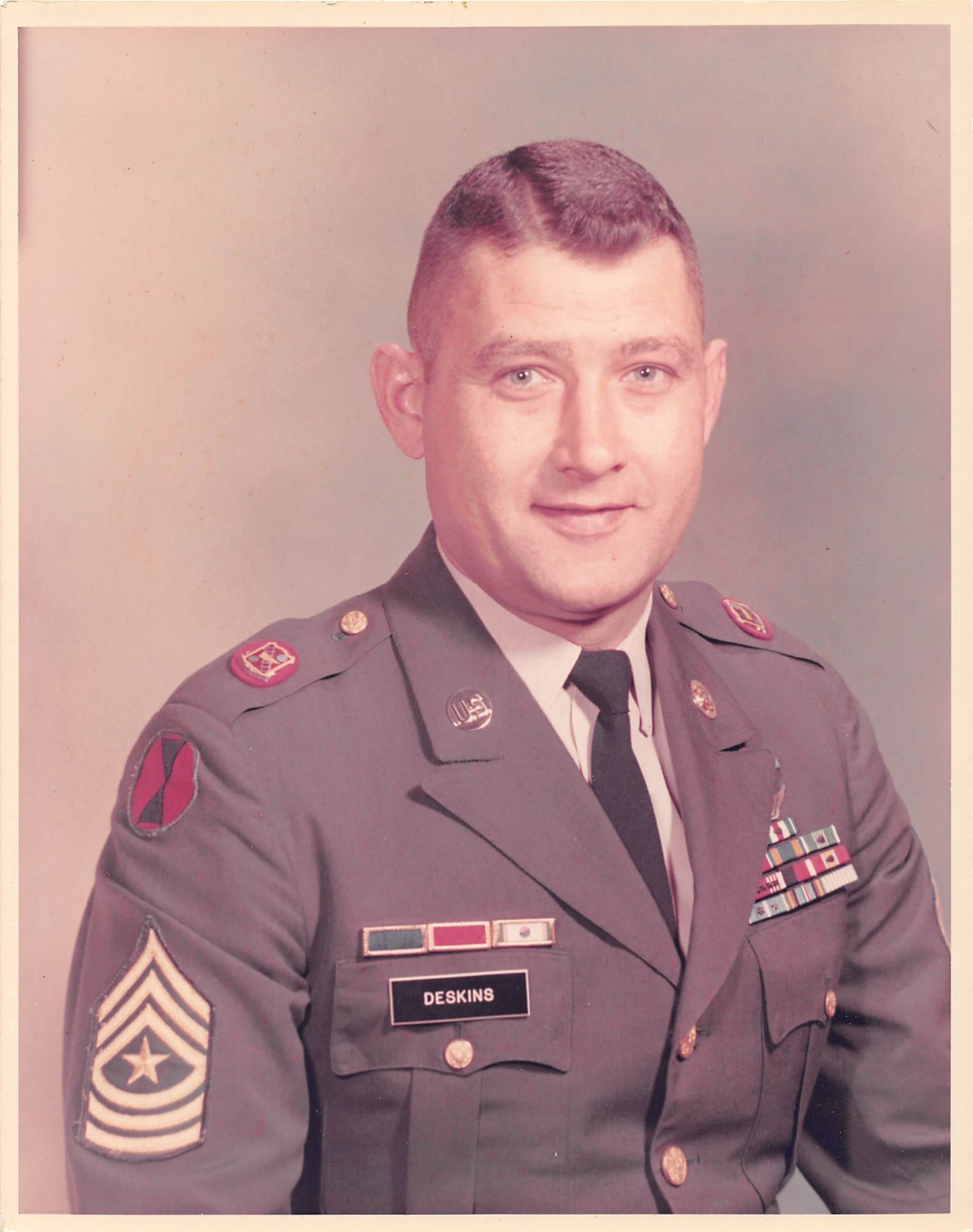 Sergeant Major Kenny Deskins passed away peacefully at home after a lengthy illness on June 16, 2015 surrounded by his family. Kenny was born December 6, 1932 in Pike County, Kentucky to Jimper and Ethel Deskins. He retired from the United States Army with 30 years distinguished service and then served an additional 18 years with the Civil Service at Fort Eustis, VA.
Kenny was preceded in death by his parents and his brothers Teddy Deskins, Dick Deskins, Homer Deskins and Denver Deskins. Sergeant Major Deskins is survived by his wife of 62 years, Geneva Mae (Thacker) Deskins; his son and daughter-in-law Zane Keith and Sherry Deskins; his daughter and son-in-law Deborah Kay and Mark Tschirhart; his five grandchildren Justin Kyle Deskins, Leticia Taylor, Paul Tschirhart, Megan Tschirhart and Mary Tschirhart; and five great-grandchildren. He is also survived by his sisters Jean Huffman of Dry Ridge, KY; Marilyn Compton of Pikeville, KY; Hilda Williams of Cookeville, TN; Emogene McNulty of Interlachen, FL; Claudette Hunt of Barryton, MI and Sheila Marconi of Greenville, SC as well as numerous nieces and nephews.
Kenny devoted his life to the service of his country. He enlisted in the United States Army in 1948 at 16 years of age after talking his mother into signing her permission and adding two years to his age. He served two tours in Korea in the Infantry and then transferred to the Transportation Corps. He received extensive training in both fixed wing and rotary wing aircraft but helicopters became his true passion. He also served two tours in Vietnam in both 1963 and 1968. He returned to Fort Eustis in 1969 where he retired in 1979 as the Command Sergeant Major for the Aviation Logistics School. He then began a second career of service to his country in the Civil Service. He served for 18 years and retired as Deputy Director of the Department of Aviation Systems Training at Ft. Eustis, VA.
Sergeant Major Deskins received numerous awards and commendations during his career. He was awarded the Bronze Star with two oak leaf clusters, the Air Medal with three oak leaf clusters, the Army Commendation Medal with one oak leaf cluster, the Vietnam Gallantry Cross with palm and the Legion of Merit to name a few. In 1996 Kenny was selected to receive the “Joseph P. Cribbins Department of the Army Civilian of the Year Award” by the Army Aviation Association of America. Upon his retirement from Civil Service he was also awarded the Department of the Army Superior Civilian Service Medal in recognition of his many years of outstanding service.
Sergeant Major Deskins was active in the Masonic Lodge and was a Past Master of Transportation Lodge 337. He was also a member of the Shriner’s Khedive Temple in Chesapeake, VA. Kenny was an avid outdoorsman who loved to hunt and fish. The family often joked that Kenny’s form of relaxation would kill most people.
The family will receive friends and family on Sunday, June 21 from 4-6 at the Altmeyer Funeral Home, Denbigh Chapel, at 12893 Jefferson Avenue, Newport News, VA. The funeral will take place on Monday, June 22 at noon at the Altmeyer Funeral Home. Interment will be at the Albert G. Horton Jr. Memorial Veterans Cemetery, 5310 Milners Road, Suffolk, VA 23434 at 2 PM. In lieu of flowers the family requests that donations be made to Mary Immaculate Hospital, Riverside Hospital Cancer Center or the Peninsula Rescue Squad.