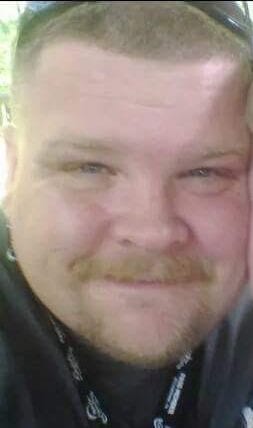 Scott “Slim” Perry of Newport News, passed away Tuesday, August 25, 2015 at the age of 40. He had suffered from a rare form of Kidney Disease and had been receiving Dialysis since 2013, but his passing was unexpected.
Scott was born to parents, Greg and Cyndie Perry September 7, 1974 in Olean, NY. He attended Warren High School in Warren, PA. He was a member of the football team and the fraternity, Delta Sigma Epsilon. In 2001, he married Kari Button and they lived in Meadville, PA. until 2004 when he received his Associate Degree from the New Castle School of Trades and began work at Ed Schultz in Warren, PA. In 2005, they moved to Newport News where he began work at Tread Quarters. He was an avid Steelers fan, KISS fan, he loved fishing, working on his Thunderbird, watching scary movies with his kids and playing with his granddaughter.
He was preceded in death by his father, Greg Perry in 2010; his maternal grandparents; and his paternal grandfather.
Scott is survived by his wife, Kari Perry; his two daughters, Kaitlynn Perry and Karah Perry; his son, Dalton Perry; a granddaughter, Lillian Crape, all of Newport News; his mother, Cyndie Perry; his brother, Shane Perry; his grandmother, Delores Mangel of Perry, FL; his mother-in-law, Laurie Israel; two brothers-in-law, Andrew Button and Adam Button; a sister-in-law, Liza Buckingham; a nephew; five nieces; and by many other family members and friends.
A public memorial service will be held at Lee Hall Baptist Church Sunday, August 30, 2015, at 4 pm.
The family asks that donations be made to gofundme to pay for the funeral at www.gofundme.com/m52s464k or to the family c/o Kari Perry at 711 Mary Robert Lane, Newport News, VA 23608.
Altmeyer Funeral Home, Denbigh Chapel is in charge of arrangements.
Online condolences may be shared with the family at altmeyerfuneralandcremation.com

I am so sorry to hear about Slim. He was a great true friend for many years of my teenage years. I know God is with you and will help you through this.