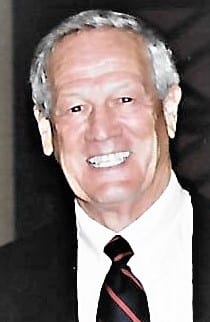 Rufus E. Dalton, III, passed away November 19, 2019. Born June 30,1931 in Richmond, Virginia, to the late Dorothy and Rufus Dalton, Jr., he was raised in Richmond and later Portsmouth, where he attended Woodrow Wilson High School.
Rufus served in the United States Marine Corps during the Korean War, and left at the rank of sergeant after serving for several years. He was particularly proud of his short time in service and loved to recount tales of having spent time alongside his favorite ball player, Ted (The Thumper) Williams.
After leaving the military, he went to work for Birsch Construction Corporation in Norfolk, and rose to Executive Vice President. When the Company was sold to REA Construction of Charlotte, North Carolina, he became president, and oversaw all operations in Virginia. He also served as president of the Virginia Road Builders Association for several years. He served on many boards and foundations throughout his career.
Rufus loved the outdoors and his beloved home on Bay Island. He enjoyed swimming in his pool, fishing and boating, and watching his grandchildren do the same. Having been an avid and talented tennis player for many years, he had fond memories of matches and tournaments at the Tidewater Indoor Tennis Center, Cavalier Country Club, and Cape Henry Racquet Club, of which he was a founding member. Later in life, he found joy in working out at the Virginia Beach Recreational Center and daily lunches at the Beach Pub with his buddies.
Rufus is survived by his daughter, Kathy, and her husband Tommy Thomson, son Carl Dalton and his wife Elizabeth, and grandchildren Bobby and Dalton Thomson, Tristan and Zoie Henry, and Sam and Tillman Dalton, as well as a large extended family. He was predeceased by his sister, Jean Dalton Coggins, and brother Thomas Cullen Dalton.
There will be a Celebration of Life on Saturday, November 30, 2019 from 3 to 5p.m. at the Princess Anne Country Club, 3800 Pacific Avenue, Virginia Beach. Burial will be private.
In lieu of flowers, memorial donations may be made to the Virginia Beach Library Foundation vblibraryfoundation.org, Woodrow Wilson High School Athletics or a charity of one’s choice.

The lord is with you

May your memories of Rufus Edward Dalton, III, give you peace, comfort and strength…