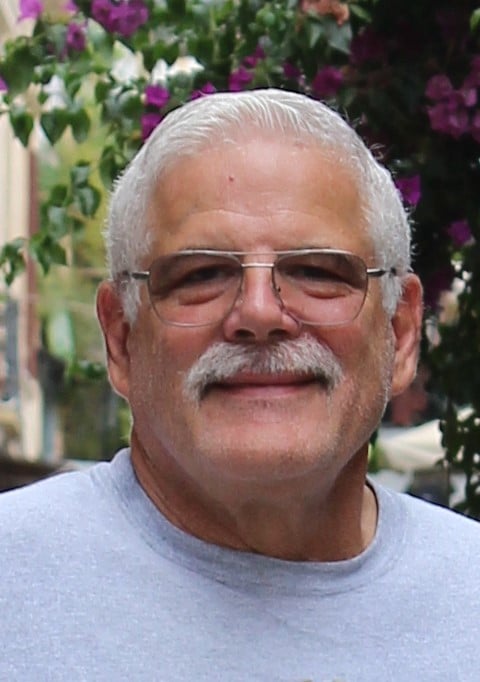 Richard Bernard Risi, 72, passed away unexpectedly on March 14, 2022 at his home in Va Beach. Richard was born on September 15, 1949 to Bernard and Eleanor Risi in Norfolk, VA.  Richard was a generous, kind and loving soul that would do anything for anyone.  Richard was married to the former Barbara Smith in October of 1978 in Harrisonburg, Va.  Together they had three beautiful children, Brian, Erin, and Shelley Risi. He deeply loved his family and was a supportive husband and father in all their endeavors, encouraging them each to follow their dreams. He would take the family to the beach every summer, and taught his kids how to swim and fish.
Richard grew up in Portsmouth, Va graduating from Cradock High School in 1968. After High School, Richard attended Norfolk State University and was a proud member of the football team. He fondly remembered his time there as a formative experience for the man he would become. Richard then went on to attend Rockingham Memorial Hospital’s school of Radiologic Technology, where he was employed for a number of years as an X-Ray Technician. He went on to gain a certification in Computed Tomography, in which he gained employment with Shenandoah Shared Hospital Services in the Shenandoah Valley of Virginia. He and his family moved to Mt. Pleasant, South Carolina to begin a career with SunHealth Inc. managing their mobile CT units which serviced different hospitals throughout North and South Carolina. He later moved his family to Rock Hill, SC as changes occurred within the mobile CT industry. In 1989 after the birth of his youngest daughter, he and his family moved back to his hometown of Portsmouth, Va where he began working as a manager in Sentara Norfolk General’s Radiology department. He was also employed at Maryview Hospital part time, as an X-Ray Technician for many years. Again he changed positions and began his career as a Clinical Applications Specialist with GE part time and later full time with Neurologica Corporation, until his retirement in June of 2019. This career move led to the opportunity for extensive travel, as he trained technicians throughout the world. This was a love that he and his wife were able to share together, as she traveled alongside him, as often as possible. Several favorite trips he and his wife took were to Italy where his ancestors were from, enjoying the Italian cuisine and countryside. He enjoyed sharing photos and stories with family and friends about his adventures around the world. He was a very hard worker, but every chance he could get he would spend time with his family and friends.
After retirement, he moved to Chicks Beach on the Chesapeake Bay, where he spent many days fishing, kayaking, walking, and living out his dream of having a place near the water. He never stopped making time for his family and friends. When his granddaughters, Olivia and Fiona Risi were born, he was over the moon with joy to be a grandfather. He adored and loved both of them, and was attentive and devoted to them always.
Richard was predeceased by his parents, brothers Brian Burke, Kenneth Burke, and Paul Risi, and sisters Denise Hunter and Carol-Lynn Risi. Left to cherish his memory are his former spouse Barbara, his children Brian and wife Lauren Risi, Erin Thomas and husband Aaron, Shelley Risi and partner Joel Bugden, and two precious granddaughters, Olivia and Fiona Risi, niece Gidget Cline, great nephews Syd and Zach Singleton, great niece Jenny Singleton, and special friends Angela Shelley and Dave Baker. A celebration of life will take place at a later date for extended family and friends. Condolences may be left for the family at www.altmeyerfh.com.

Richard was my next door neighbor who became like an uncle to me, we were great friends. We enjoyed each other’s company in many aspects of life whether it was helping each other around the house, talking about our lives, discussing politics/current events, cooking out on the grill or going to the beach. Some of my fondest memories of Richard was playing board games with my family, going out to Froggies for live music(wow Richard can dance!) and my favorite was Halloween where he dressed up as a “mad scientist” using his old scrubs and medical clothes and he had me put fake blood all over his face. HAHA! We had a blast going to Cinema cafe, throwing him his birthday party and walking the haunted forest at Hunt Club.

Richard was a thoughtful, compassionate person that cared about other peoples well being. He was a great listener, someone that actually was interested in what you had to say. He wanted to help. While I met Richard in his 70’s he was still the life of the party, everyone young and old liked hanging out with Richard, he got along with everyone. Richard would come over almost every day and several times a week for dinner and would always ask if he could bring something or help out. He did drink quite a few of my beers but he brought pie over so we so we considered it a wash. Richard was dedicated to his walks and bragging about his family and old friends. While we did not know Richard for a long time, we really cared for him and cherished the time we spent together. His picture will always be in our family album.
I will miss you buddy!

Dear Erin, Brian, Shelley and Barb and family, I’ll never forget your Dad and husband as a kind and happy person. I’m so sorry for your unexpected loss and you all are in my heart and my thoughts. Mr. Risi was like a big teddy bear and I often think about how kind he was to me when we visited you all during our senior year of college at Mary Washington. He was very caring and compassionate. I will forever cherish those memories. Love, Sara

My family and Risi’s family often shared vacations to the East Coast. Nags Head NC was one of the best ever. Risi taught me how to go crabbing and cook them for dinner. 10 people in a huge house near the ocean, great times. Our kids had a ball and so did we. Laying in a crows nest watching the Perseus meteor shower. Fishing. Crabbing. I remember the vacation the ocean was especially rough and Risi broke his collarbone. Our vacations were epic and some of the best times of my life.

A great friend, teammate, and classmate at CHS (Class of ’68). Richard’s hilarious sense of humor kept the Admiral’s football team’s spirits up during many a loss. Coach Weldon arranged for Richard, myself, and several teammates to pick corn on one of Mr.Culpepper’s fields in Driver VA after school for date money…not a lot of corn was picked, but there were tons of laughter!

He sounds like he was a lovely man. May he rest in peace and my condolences to those left behind whose lives he touched.

Richard will surely be missed. He was kind, genuine and a good roommate. I am so happy he found a place in Va Beach! Sending prayers to Barb and his family.

Richard was my friend and he helped me so much in 2006 as my husband passed away in a diving accident. He was my co worker at Sentara during this time. He shared
about his brother who was also a diver that had a tragic accidental death. This gentleman was my rock and we stayed in touch throughout the years. I was so shocked to hear of his passing and I want his family and friends to know how much I loved him for all he did for me to help me and how beautiful of a person he was! I will miss you Risi cup!!! See u in heaven!

Barb, I know Richard’s family is crushed at his loss but there are the many good memories of times together and I pray those will be recaptured each time you reflect on him. We are here for you.

You will be missed cousin. I am happy we managed to keep in touch over the years with email and texts and some visits. I will always remember our summers together in Highland Falls with cousin Roger as teenagers. Double dating the West Point girls. Fun at the Band Box or down at Breezy Point. I always enjoyed coming down to Virginia and your mom and dad’s hospitality while I was in the Navy and stationed there. Rest in Peace my friend. You are remembered and loved. Kevin

Although I haven’t seen Richard in probably close to 50 years I would like to offer my condolences. I am Richard’s cousin, Roger Conceicao. Richard, as I, are one of four children born to the four Weaver sister’s, Joan, my mother, Elanor, Richard’s mom, my aunt, Grace, Kevin mom and Ruth, Jean’s mom and our aunt’s. So even though it’s been many, many years since we were last together it’s always sad to hear of someone’s passing. May he RIP.
PS we were all born in 1949…..