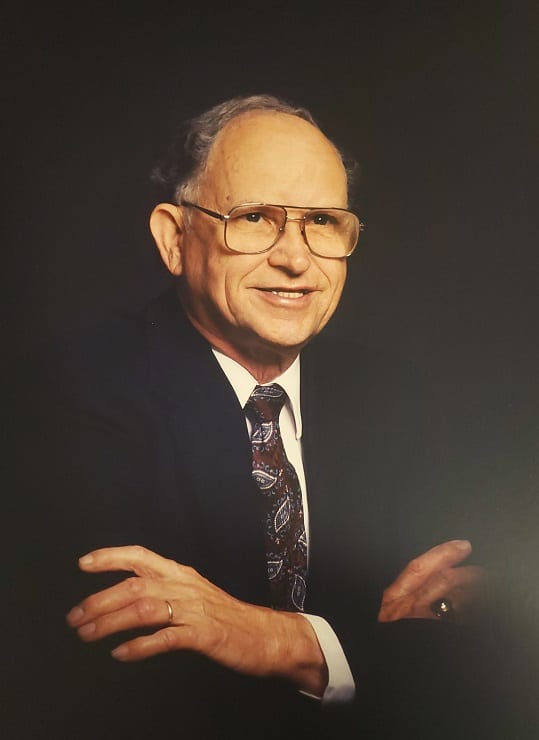 Rev. Lowe A. Norman, Jr, 93, of Virginia Beach, went to his heavenly home on June 15, 2020.  Born in Charlotte, NC, he was the son of the late Sara Janie Kearns and Lowe A. Norman. In July, 1945, he married the love of his life, Mary, who he adored until her passing in October 2019. He served our nation as a member of the US Army during World War II. After receiving an honorable discharge in January 1947, he entered Wake Forest University where he earned a BA in religion. He received his M.Div. from Southeastern Baptist Theological Seminary. Upon his graduation he was ordained into the Gospel Ministry at Green Memorial Baptist Church, Charlotte, NC.

He spent a lifetime in ministry serving as pastor of Red Mountain, Woodville and Riverside Baptist Churches in northeastern North Carolina in the 1950’s and Pleasant Grove and Green Run Baptist Churches in southeastern Virginia, from 1959 until his retirement in 1995. He led countless souls to a saving knowlege of Jesus Christ during his ministry. He baptized hundreds of new believers, married countless young couples and performed many funerals. He received pastoral clinical training at Baptist Hospital in Winston-Salem, NC and the Medical College of Virginia in Richmond, VA and spent thousands of hours in family counselling. He served on various boards including the Baptist General Association of Virginia and the President of the Norfolk Baptist Association Pastors’ Conference. For many years he was Chairman of the Anchor Baptist Campground in Currituck, NC.

He served as a volunteer firefighter and instructor of emergency childbirth and CPR for the St. Brides Volunteer Fire & Rescue in Chesapeake and the Princess Anne Courthouse Rescue Squad, Virginia Beach.  A life-long avid motorcyclist, he was a member of the Christian Motorcycle Association and the Retreads motorcycle club. He enjoyed camping and RVing with his family and spent much time traveling the country with them. He enjoyed woodworking with Mary in his shop. In his retirement he served as interim pastor for several churches including Oak Grove Baptist in Virginia Beach. Among many other things he was known for his love of ice cream.

Arrangements are being made by Altmeyer Funeral Home, Virginia Beach.  There will be a graveside service at Camp Creek United Methodist Church in Lancaster, SC at 11:00 am, Friday, June 19.  A celebration of life memorial service will be held at a later date at St. John’s Baptist Church in Virginia Beach. In lieu of flowers donations may be made to the St. John’s Baptist Church Building Fund.

My condolences to Rev. Norman’s family. I was honored to be his insurance agent for many years. He was an outstanding person whom I will never forget. Will always remember Rev. Norman on his motorcycle. God Bless

I am truly sorry to hear of your loss. Thoughts and prayers are with you and your family.
Sincerely;
Andy Ward

I am truly sorry to hear of your loss. Thoughts and prayers are with you and your family.
Sincerely;
Andy Ward