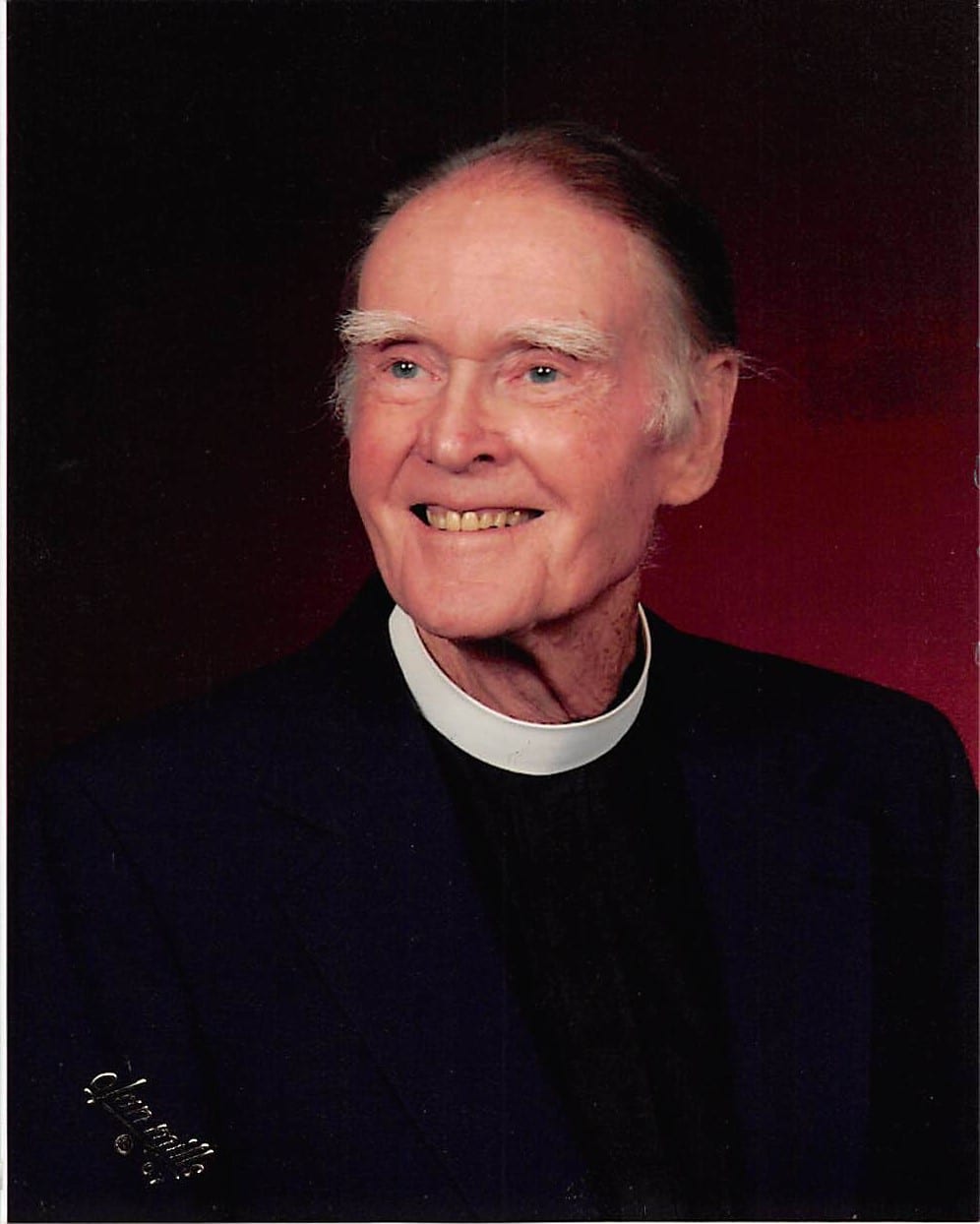 The Rev. Dr. Edward Morgan III, a pioneer in the field of lay pastoral ministry in the Episcopal Church, died July 25, 2015, in Williamsburg, VA. Born in Richmond, VA on November 18, 1924, son of Frederic Hamilton Morgan and Edna Stewart Morgan, he graduated from Thomas Jefferson High School where he was a member of the National Honor Society and played number one singles and doubles in tennis. He attended Virginia Polytechnic Institute, where he was a member of Pi Tau Sigma honorary mechanical engineering society and was chosen for the Pershing Rifles precision drill team.
After serving his country in the U. S. Navy in World War II, he continued his education at the University of Virginia, where he taught as a student instructor in Applied Mechanics and was elected to Tau Beta Pi honorary engineering society. He received his Bachelor of Mechanical Engineering degree in 1948. After graduation, he worked for DuPont in rayon research before feeling the call to ordained ministry.
He earned a Master’s Degree in Divinity at the Episcopal Theological Seminary in Alexandria, and after ordination served as Deacon-in-Charge and Rector of Cople Parish in Westmoreland County VA, 1955-1960, and as Rector of St. Luke’s Episcopal Church in Alexandria, 1960-1981. While there, he was a co-incorporator and founding board chairman of The Pastoral Counseling & Consultation Centers of Greater Washington, which became the largest counseling provider of its kind in the world, with 32 locations staffed by 47 therapists.
He was Westmoreland County Chairman of the American Red Cross, a member of the Fairfax County Citizens Advisory Committee on Low Income Housing, and served in many other civic organizations. For the Episcopal Church, he served as Dean of the Mount Vernon Region, member of the Commission on Ministry, and Secretary of the Standing Committee. He was certified as a pastoral counselor and as a marriage and family therapist, maintaining a professional practice in both fields. With his wife, Margaret, he led numerous seminars, retreats, and several year-long groups in the fields of couple communication and marriage enrichment. He was a member of the Sons of the American Revolution and the Sons of Union Veterans of the Civil War.
He earned a Doctor of Ministry degree from the Howard University Divinity School, and was called to the faculty of the Episcopal Seminary where he directed the field education intern program and taught as professor of pastoral theology, 1981-1993. He was Interim Rector of St. Patrick’s, Falls Church VA, 1993-1994, and Priest Associate at St. Martin’s, Williamsburg, 1994-2001.
He is survived by his wife of sixty-six years, Margaret Ridgely Bryan Morgan; and four children: Elizabeth (Beth) Stewart and her husband, Richard M. Scherer; Sarah Bryan and her husband, Stephen D. Fairchild; Edward IV and his wife, Joanne (Jodi) Hastings; Margaret (Meg) Hamilton and her husband, Preston J. Peterson; five grandchildren, Christine Fairchild and her husband, Lars Cade, Daniel Fairchild and his wife, Meghan Drysdale, Catherine (Catie) Fairchild and her husband, Tyler Lanser, Grant Edward Peterson and Dean Morgan Peterson; and four great-grandchildren, Theodore Rex Cade, Amelia Iris Cade, Nellie Elaine Fairchild, and Alice Dana Lanser.
A funeral service will be held at Bruton Parish Church, Williamsburg on Thursday, July 30, at 11:30 a.m. Interment will be in the cemetery of the Episcopal Seminary in Alexandria on Saturday, August 1 at 11:30 a.m. Bucktrout Funeral Home (www.bucktroutfuneralhome.net) in Williamsburg may be contacted for further information. In lieu of flowers, memorial contributions may be made to the Association for the Preservation of Yeocomico Church, Fellowship of Tau Beta Pi, Bruton Parish Church, or a charity of your choice.