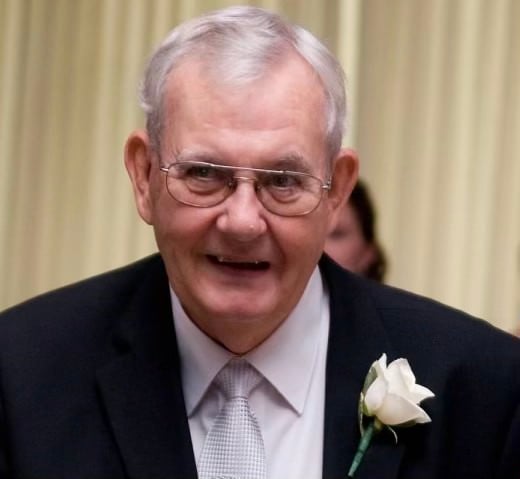 Raymond Joseph Lafferty, Jr. of Virginia Beach, VA, formerly of Oakdale, PA, was reunited with his parents and brothers in heaven on August 30, 2022, at the age of 89. He was born October 21, 1932, in Cresson, PA, to Raymond Joseph, Sr. and Vera (Hart) Lafferty.
Ray is survived by his wife of 67 years, Margery (Graff) and their children, Kathy (Gerald) Hupp of Virginia Beach, Sally (Ron) Cord of Pittsburgh, Judy (Ron) West of Birmingham, Raymond (Christine) Lafferty of Suffolk, Kelly Christianson of Virginia Beach, and Michael (Dawn) Lafferty of Oakdale. He was a cherished brother of Monsignor John Lafferty (deceased), Laverne Neumann of Chevy Chase, Clarence Lafferty (deceased), and Patricia Negherbon of Harrisburg. Ray was blessed to have 14 grandchildren and 9 great-grandchildren with 2 on the way. Ray also has many beloved nieces and nephews.
Ray graduated from St. Francis University and shortly after met the love of his life, Margery, a Johnstown Girl. After a three week courtship, they married and moved to Fort Campbell, Kentucky where he served in the U.S. Army, 101st Airborne. Ray was a loving and dedicated family man who instilled a love of the beach in all of his children with annual trips to Ocean City, MD. These trips often included extended family members and childhood friends. Throughout his life, Ray was an active supporter of West Allegheny Athletics through the various activities and sports of his children and grandchildren. Most of his career was spent with Mcgraw-Hill Publishing Company where he excelled in sales. Upon retirement, Ray and Marge enjoyed traveling, visiting family, wintering in Florida, and enjoying beachlife in Rodanthe, NC. He especially loved spending time with his growing family. Together with his wife, Ray started an annual tradition to gather his family in Canaan Valley, WV to celebrate the Christmas holiday. This time spent with family; enjoying winter sports, preparing large family meals, and the hilarity of gift exchanges continue to bring joyful memories of time together. Ray was a devout Catholic, proud Irishman, and beloved family man. He loved cheering for his Pittsburgh Steelers and Penguins.
There will be no visitation. A Mass of Christian Burial will be held on September 10, 2022, at 11:00 a.m. at St. Nicholas Catholic Church, 712 Little Neck Road, Virginia Beach 23452. A luncheon will follow in the church hall. Arrangements entrusted to Altmeyer Funeral Home & Crematory, Virginia Beach, VA.
Condolences may left for Raymond’s family below.

Should there be any issues with viewing the services live, a recording will be available immediately after services have concluded.

I am mourning with you the loss of your father and my dear friend. He was a great Irish guy! Your father and mother have been a big part of my life since they met and started dating when we were all in our early 20s. Marge and I went to Catholic High and Mercy Hospital nurses training together. Marge married Ray and I married Jack. We both moved into the same neighborhood in the Overbrook section of Southmont and raised our children together until Marge and Ray moved to Oakdale. Even with the distance, we kept up our friendship. Once we got all our children raised, we started enjoying visits and trips together. He was a good husband to Marge and a faithful friend to Jack and me. So many memories, so much of life lived together. Everyone should be blessed to have a good friend like Ray in their life!

I have attached a copy of a photo taken at the party I held for your parents when they moved to Oakdale.

Dear Lafferty family,
My whole family is saddened to learn of your father’s passing. A lot of good memories surround me when I think of the Lafferty’s. My parents were such good friends with your dad. They share many adventures and happy times with him. Please know you are in my thoughts and on my heart as you go through this very emotional time.

Fondly and in sympathy,
Maureen

My most sincere condolences- Kelly, Kathy, Judy, Sally, Chip and Mike. So many awesome memories at your house growing up -you were blessed to have such wonderful parents.

All my love,
Lisa Tighe Friello

Judy and Family – May all the love and wonderful memories give you peace, strength and comfort at this difficult time. Love and hugs to all of you.
Robin

Our deepest sympathy to Sally Cord and family. So sorry for you loss.
Love,
Chris & Chuck

With much love hugs and deepest sympathies for such a great man ne, neighbor and so many childhood memories growing up in Hankey farms our hearts are with all of you Amy ,Chris and George Mcmurtrie 🙏🏻🙏🏻🙏🏻

Our sincere sympathy to the Lafferty family. It sounds like he will be missed by many, but has left you all with many wonderful memories.

May your memories of Raymond Joseph Lafferty Jr., give you peace, comfort and strength…

Kelly and Chris, our thoughts and prayers go out to your family. I remember the one time I met your parents -We drove home one Thanksgiving through ice and snow and instead of going home that night I spent then night and was welcomed into your family for a few hours.

“A family is a river, some of it has passed on and more is to come, and nothing is still, because we all move along, day by day, toward our destination.” -Dolores Garcia 20th Century Chicana Grandmother

I met Ray when I moved to Marian Manor Assisted Living in Virginia Beach. We shared occasional meals together. I admired him and how he visited Marge at OLPH. Rest in peace, friend.