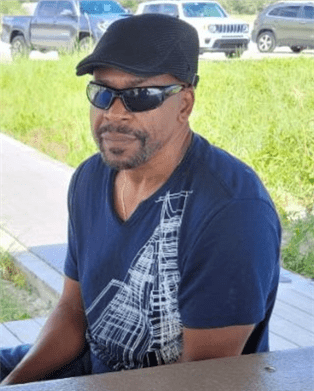 Ralph Keith Caesar passed away on Saturday, October 16, 2021. Ralph was the baby of eight children born to the late Florence and Samuel Caesar.  Ralph was born on November 20, 1959, in Newark, New Jersey.  Ralph aka “Moso” attended Barringer High School, after working for a year he decided joined the Navy in 1980.  He stayed in the Navy for 20 years where he toured several countries overseas.  During his time in the military Keith met Juliana in 1985 and was madly in love at first sight, after dating he decide that she was the one for him.  On January 25, 1986, they became one and started a life in Chicago. After moving to several states, they decided to make Virginia Beach, VA their permanent home.
Ralph retired from the Navy in 1999, where he began his heat and cooling career. When he wasn’t working, Keith spent his time hanging in his mancave, riding his motorcycle with his sea buddies, and taking pride in maintaining a beautiful green lawn. He also spent his time helping his oldest daughter Ottavia fix up her home, goofing around with his middle daughter Kathleen and playing video games with his son KC.  Keith and his family enjoy spending time on vacation visiting Italy, France, Spain, Barbados, Dominican Republic, Bahamas, and several other islands.
Ralph is survived by a wife, Juliana, and three children: Ottavia, Kathleen and Ralph Keith Caesar Jr., three siblings, Samuel “Peter” Ceasar, Brenda Ceasar Brown, Florence Marie “Lulu” Ceasar and a host of, nieces nephews, great nieces, and great nephews.
Keith will be missed dearly by family and friends near and far.
A visitation will be held from 6:00 pm to 8:00 pm on Thursday October 28, 2021, at Altmeyer Funeral Home, 5033 Rouse Drive, Virginia Beach.  Church service will be held at 1:30 at Star of the Sea, 1404 Pacific Ave, Virginia Beach following a committal service at Princess Anne Memorial Park, 1110 North Great Neck Rd, Virginia Beach, VA.

Prayers to the family

Ralph was a great person with a wonderful personality

My sincere condolences. I’m a resident of the apartment complex where Ralph worked. He was friendly, kind, reliable and skilled in his duties.
May his memory be a blessing.

We only knew Ralph for a short period of time. He was great to work with. He was a very nice person. We will miss him.
With sympathy,
Dan and Chris Piper

My husband and I are Eagle Pointe residents and remember Ralph as an efficient, hard worker…..and always a gentleman. So sorry for your loss.

The Pearl at Marina Shores Team

We had the pleasure of working with Ralph for the past several months here at The Pearl at Marina Shores. He was always smiling, positive, knowledgeable, and dependable. We will truly miss his presence.