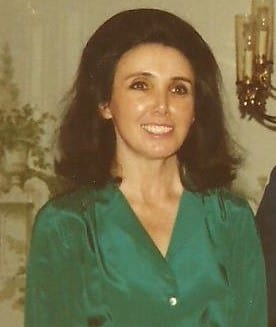 Phyllis Ann Davis of Newport News, Va., passed away Saturday, April 2, 2016, at the age of 80. She is survived by a brother, Whitelaw (“W.L.”) Snow; daughter and her husband, Cynthia and Tommy Bennett; daughter, Lisa Davis-Lee and a son and his (almost) wife, Frederick C. Davis, III (“Erick”) and Sarah Kirchner. She is also survived by seven grandchildren, Arin Bennett, Beau Bennett (with his wife Natalie), Jessica Davis-Lee, Luke Davis-Lee, Mary Katherine Davis, Frederick Carr Davis IV (“Casey”), and Jonathan Davis. She was preceded in death by her husband, Frederick Carr Davis, Jr. (“Skipper”), her son-in-law Donald Robert Lee, and her parents, Beulah and Dwight Whitelaw Snow, of Greene County, VA.
Phyllis was born on May 27, 1935 in Charlottesville, VA. She attended James Madison University and became a Registered Nurse after attending the University of Virginia School of Nursing. While still attending UVA, she and Skipper were married on Christmas Eve 1956 in the University Chapel.
Phyllis and Skipper raised a family while they traveled the country after Skipper joined the Army. They finally settled down in Newport News. Phyllis traveled the world with her beloved Skipper, playing golf and tennis whenever possible. She will be missed by her children and grandchildren.
Phyllis’s service will be held Saturday, April 9th at 1 p.m. at Altmeyer Funeral Home, 7415 River Rd, Riverside Chapel in Newport News. In lieu of flowers, the family asks that donations be made to the Alzheimer’s Association (alz.org) in the memory of Skipper and Phyllis, who are now together again. Condolences may be made at altmeyerfuneralandcremation.com.

I am very sad to hear this news. I am Phyllis’s cousin. I remember when Skipper and Phyllis came to my elementary school to give polio shots to my school. I had already had mine, but my teacher allowed me to go and sit with Phyllis and Skipper while the administered shots to my friends and classmates. I spent a great deal of time with them in Charlottesville. I remember when Cindy was a born. They were a very special couple. Later, my husband, who worked in the health care field, met a “really great doctor” in Hampton Roads. I later learned it was Skipper….. My mother, Clara Herring, was very close to Phyllis. They would talk for hours on the phone. My sincere condolences! I am sad that another shining person in my family is gone. I am sorry that I cannot be there at the memorial service.