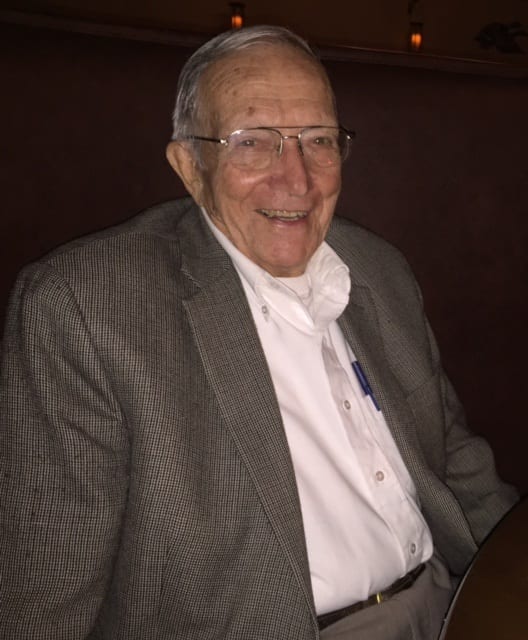 Paul Martin Neuman (90), of Virginia Beach, passed away on Friday, February 17, 2017 at The Memory Center.
Paul was born on May 11, 1926 on a farm in Ransomville, New York to Martin and Rose Neuman.  He graduated from Wilson High School in 1943, attended Concordia College in Bronxville, New York and graduated from Ithaca College in Ithaca, New York in 1949, with a Bachelor of Science degree in Physical Education.  He proudly served his country in the U.S. Air Force in World War II from 1944-1946 and again, in the Korean War from 1950-1952.  On June 27, 1953, Paul married his wife, Ruth (Siegert) of Bergenfield, New Jersey and they resided in Ithaca, New York. Later they raised their family in Rochester, New York, Naperville, Illinois and Chatham, Illinois.
Early in married life, Paul was an Athletic Director for the Y.M.C.A. in Ithaca and advanced to enjoy a 30-year career as a Human Resources Officer with General Dynamics. He retired in 1988 and moved to Naples, Florida, where he continued to work as a real estate agent. Paul and Ruth eventually moved to Virginia Beach in 2003 to be close to family and to enjoy seeing their grandchildren grow in life.
He was an avid sports enthusiast, a private pilot and enjoyed spending the summer months at the family’s cabin in the Adirondack Mountains of Upstate New York.  Very devoted to his Christian faith, Paul was a member of the St. Michael Lutheran Church Choir in Virginia Beach and volunteered his services in delivering food to the Judeao-Christian Outreach Center. With his life-long interest in aviation, he also enjoyed volunteer activities at the Virginia Air Museum in Pungo.
Left to cherish his memories are his wife, Ruth of 63 years, sons Dwight Neuman of Glenwood Springs, Colorado, Todd Neuman of El Portal, Florida, daughter Diane Ryan and her husband Sean of Virginia Beach, Virginia, three grandchildren Meghan Ryan of Harrisonburg, Virginia, Patrick Ryan of Virginia Beach, Anna Ryan of Torrance, California and a brother Bruce Neumann of Greensburg, Pennsylvania.
Family and friends are invited to attend a Celebration of Life Service at 2:00PM  on  Sunday,  March 5, 2017 at St. Michael Lutheran Church at 2208 Princess Anne Road in Virginia Beach.
In Paul’s memory and in lieu of flowers, the family requests contributions be made to the St. Michael Lutheran Church Choir in Virginia Beach or the Alzheimer’s Association – Southeast Chapter.

Diane and family , We are so sad to hear of Paul’s passing . What a gentlemen he was. Your dad was loved by everyone and had a contagious smile. He will be missed.

My thoughts and prayers to you Todd (and Steve) and your family at this sad time. I remember Paul and Ruth dancing at our Valentine dinner in the clubhouse. Their love for each other was so obviously touching. My prayers to your mom. SincerelyDonna

Diane, I am sorry to hear of your Dad’s passing. I’m keeping you and your family in my thoughts.

To the family of Mr. Paul Neuman, I pray that the God of all comfort will comfort you guys heart and give you strength in this time and time to come. I had not known Mr. Neuman that long but since the 1st day I met him he was such a nice gentleman and I’m going to miss him. When i first met him I asked if he was a Believer in Christ and he said “Oh Yeah” with a big smile on his face, which made me smile even bigger and I said “Well that makes you and I brother and sister in Christ  I had the pleasure of sitting and talking to Mr. Neuman up until a week before  his passing on to be with our Father. On February 11, 2017 I came to the Memory Center a little earlier with the intent of spending time with him. I sat with him for about 45 minutes. He was still lying in the bed but he was awake and I came in and greeted him and asked him if I could just visit with him which he was ok with that. I asked if he would like for me to read the Word of God to him which he was able to get out the words oh yes. Before I did we had prayer and I told him I had a song just for him that had just come to me the day before while thinking of him and it was Take My Hand, Precious Lord and Lead Me On. We both just listened to it and then I just encourage him with scripture, reassuring him of his salvation in Jesus, the love of God, and of heaven our home. I prayed  and then asked if he was ready for breakfast which he said yes. I’m grateful to have been able to spend my last time with him delighting in what a great God we belong to. Blessings to you!
Cynetra

Dear Diane,
My sincere condolences to you and yours. May the good memories get you through this very difficult time.

Diane and family. I am sorry for your loss. You are in my thoughts through this tough time.

My condolences to all the family of a good man. A special thought for Meghan, Patrick and Anna who have lost both grandfathers in two months

Diane,
I am so sorry for your loss. Many prayers and good thoughts are with you and your family during this difficult time.

Diane, my thoughts are with you and your family.

Dean Ryan- sending prayers of grace and healing to you and your family in your time of need, May you find Peace Dean Ryan. Truly, Martina Ford