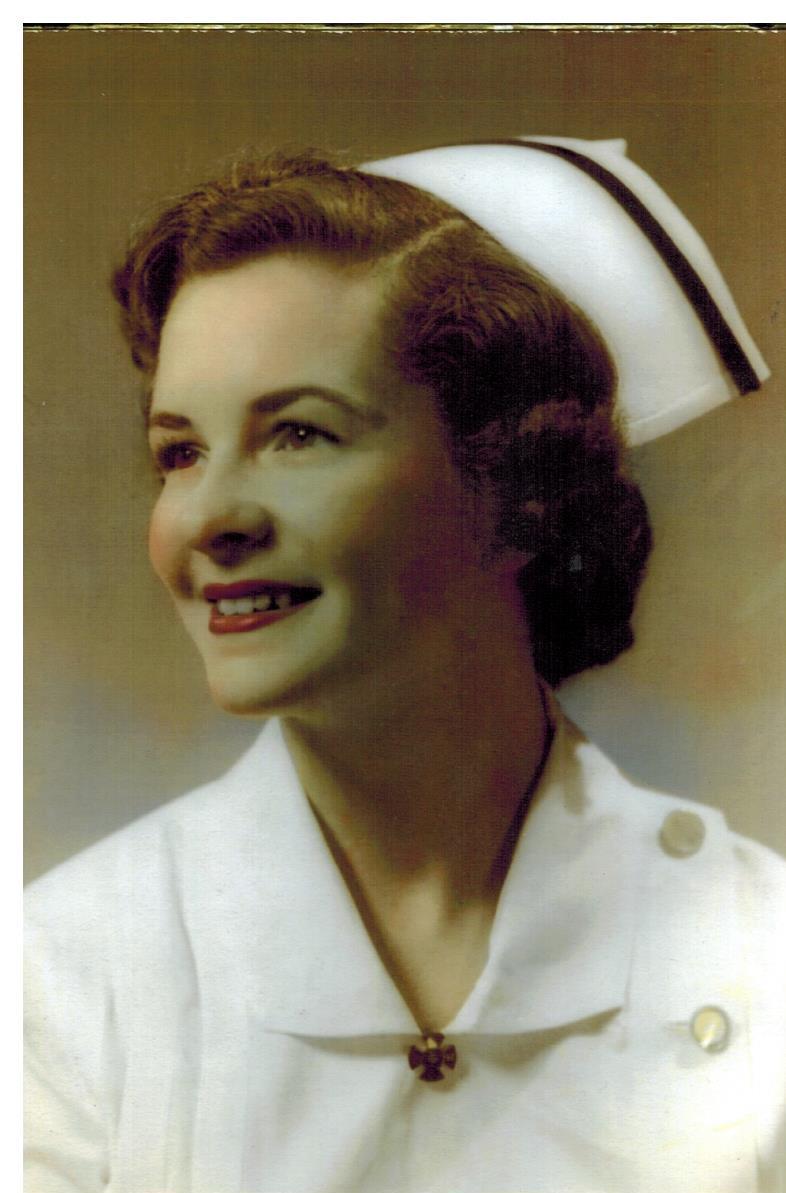 Patricia Doris Fennell O’Neil was born on March 14, 1935, and passed away at 9:20 a.m. on August 30, 2015. She was born in Lowell, Massachusetts, the daughter of the late Henry Francis Fennell and Doris Yvonne Fennell. She was also predeceased by two siblings, Susan Fennell Lambert and Kenneth R. Fennell.
Upon graduating from Lowell High School she immediately entered nurses training at Lowell General Hospital and graduated in 1955. During her training, because her parents worked such long hours, she became a second mother to her four siblings, fixing lunches and suppers and helping them with their homework. She received her registered nurse license and remained at Lowell General as a staff nurse, working throughout the hospital. In 1956 she entered the U.S. Navy Nurse Corps, serving at the Marine Corps base at Camp Lejeune, NC and at Portsmouth Naval Hospital. In 1960, she left active duty and entered the inactive Naval Reserve. She returned to Lowell General and was the head nurse of the private pavilion and evening supervisor of the entire hospital from 1960-1962. She served as supervisor of the OB department from 1962-1963. After attending Boston University to enhance her nursing skills, in July 1963 she activated in the reserves to teach Navy Hospital Corpsmen at the Naval Reserve Training Center in Lowell, Massachusetts. It was there she met her future husband Jim, who was an active duty Navy instructor/training administrator at the center. They were married in February 1964.
From 1963-1966, she was instructor of obstetrics and staff nurse. Her first son Jim was born in April 1965. She was selected for Lieutenant Commander, but turned it down and was discharged from the Naval Reserve. She and Jim moved to California in 1967 where their second son Sean was born in October of that year. They returned to New Hampshire in 1969, and she returned to Lowell General Hospital as staff nurse from 1969-1971. The family then moved to Virginia Beach in August 1971, which became their permanent home. From September 1971 to March 1986 Pat worked at DePaul Hospital as staff nurse labor and delivery and as evening supervisor. She retired from nursing in 1986. She then attended Tidewater Community College and received an Associates Degree in 1987, and tutored students in mathematics at TCU, Catholic High School and Kempsville High School, as well as at her home for over 10 years.
Since her husband and sons all play golf, and she didn’t want to be a golf widow, she took up golf. For many years she was the only one in the family to have a hole in one! Over the years she has belonged to the following ladies golf groups: Metro, Eagle Haven Ladies, Kempsville Ladies, and Oceana Ladies. Pat and her husband also belonged to a mixed couples group, “Luck of the Draw”, that played at Eagle Haven on Sundays, as well as traveling couples group, “F.R.O.G.S.”, that played courses all over Virginia and North Carolina. Pat met a great many good and close friends during this period. And always, after a round of golf, she had a question for her husband about the rules. In addition to golf, she played bridge with a group that met on Monday, Wednesday, and Friday. She bowled once a week with the Navy Officer Wives group at Little Creek Amphibious Base.
In November 2010 she was diagnosed with cancer in her right lung. She started chemotherapy and radiation in December. During the treatment it was discovered that she also had cancer in her left lung. She completed her chemo/radiation in March 2011. After a short rest period, she began cyber knife treatment for her left lung and completed that treatment at the end of July. After being cancer free for three years, she was diagnosed again with cancer in both lungs in April 2014. She had cyber knife treatment in May on both lungs, which was completed in July 2014, and was once again considered to be cancer free. In January 2015 she was diagnosed with Alzheimer’s disease. Her husband Jim and son Sean were her main caregivers, and as the Alzheimer’s disease progressed and worsened she was admitted to Sentara Leigh Hospital, where it was found that she had pneumonia and a blood clot on her lung. The doctors said her chances of survival were slim, and it was decided to put her on palliative care and make her as comfortable as possible. She passed peacefully in her sleep.
She is survived by the following people who loved her very much: her husband Jim, son Jim O’Neil and wife Mia, son Sean O’Neil and wife Tammy, and three grandchildren she adored and was very proud of. Lashar, the oldest, is serving in the Merchant Marines. Brenden, the next, led the Ocean Lakes Dolphins as quarterback to their first state championship in 2014, and now plays and works for Newport News Shipbuilding. And finally, Tameria (the Terror of Tidewater as grandpa calls her), is 12 and very athletic, playing boys basketball. Also, she is survived by her sister Eileen O’Brien and brother Henry Francis Fennell and his wife Judy of Lady Lake, Fl/Main. She also leaves behind several nieces and nephews.
Hopefully, where she is going there will be a threesome on the t-box waiting for a fourth and many bridge players looking for a partner.
A memorial service will be conducted Tuesday, September 8, 2015, at 11:00 a.m. at Altmeyer Funeral Home, 5792 Greenwich Road, in Virginia Beach. Condolences may be offered to the family at www.altmeyerfh.com.

We were so sorry to hear of Pat’s passing. Jim, we remember that it was you and Pat that got us started in Luck of the Draw. Our first play was with you two. Lots of fond memories of our times with Pat. Never forget. With sincere regrets. Bob and Kitty

So sorry for your loss. My thoughts and prayers go out to you and your family!