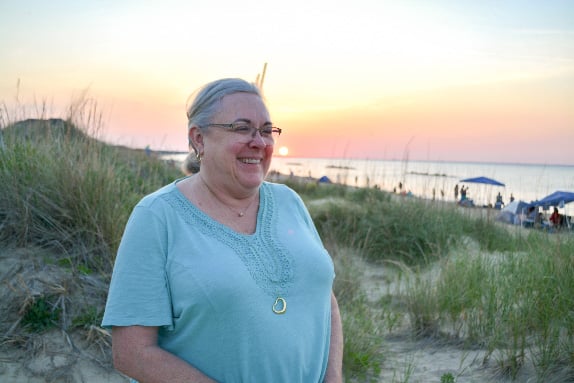 It is with deep sadness we announce the passing of Patrice Bowles Moore, 66, of Norfolk, VA on October 30, 2022 at Sentara Leigh Hospital.

Patrice was born in Virginia Beach, VA to Ray and Bette Bowles, and she graduated from Kempsville High School in 1974. Following high school, Patrice moved to Harrisonburg, VA to attend James Madison University where she received her B.S. in Speech Pathology and Audiology and her M.Ed. in Hearing Disorders.

After graduating from JMU, Patrice and her husband, Michael P. Moore, lived in both San Francisco, CA and Rockville, MD before ultimately settling in Middle Tennessee in 1990. While in Tennessee, Patrice and Michael welcomed their son, Ryan, and daughter, Michelle. Patrice was an active member of St. Stephen Catholic Community in Lebanon, where she participated in the choir, taught sign language to the community, and served as the VBS music director for many years. In addition to her church, Patrice was a consistent and active volunteer giving her time and many talents to her children’s schools and her larger community.

In 2015, Patrice moved to Charlottesville, VA with her husband Michael shortly before he passed, and then finally settled back in East Beach, Norfolk, VA in 2017. During her time at East Beach, Patrice was an active member of The Garden Club of East Beach and the East Beach Circle of the King’s Daughter.

Although Patrice had several great experiences before having children, her purpose in life was ultimately fulfilled when she decided to become a full-time mother. Ryan and Michelle were her greatest joys, and she loved them fiercely throughout her life.

Besides her two children, Patrice’s passions were making music and helping others. She often said that music played a pivotal role in making her the person she was, and in her free time there was nothing she loved more than helping bridge communication gaps for the hearing impaired.

Patrice enjoyed playing Mahjong with her friends, admiring the bay from her beautiful house, planning family holidays, hosting dinner for friends and family, and most of all talking on the phone with Ryan and Michelle. Patrice was a shoulder to lean on for anyone who needed guidance, and she will be sorely missed throughout her many communities.

A service will be held in Tennessee, to be determined at a later date.

In lieu of flowers, please make donations either to the Children’s Hospital of The King’s Daughters or The Garden Club of East Beach.

Donations can be made to: East Beach Garden Club

My Sweet Friend. I cannot start to say how much I will miss you. I have been in shock and denial since Sunday morning. I love you. Ryan and Michelle, Noah and Sophie, know that you remain in our prayers at this time.
Patrice, until we meet again…

I’m so sorry for your loss. We’re thinking about you all!

Patrice will be greatly missed. I have such fun memories of our time together as girl scout leaders while our children were at Sumner Academy. Michelle and Ryan I know she loved you more than anything and she is proud of the adults you have become. Love to you all.

So sad that beautiful Patrice is no longer with us! Praying for the family and sending lots of hugs and much love! May you feel the Lord’s comfort & mercy during this time!

My condolences for the family. As a friend of a Michelle and Noah, I remember Michelle and her mother were very close. I hope you feel surrounded by much love during this time of sadness and may you always feel comfort in the shared memory of Patrice.

Patrice, I will miss you and will always remember the sound of your laugh, the strength of your hugs. You surely and fiercely loved Ryan and Michelle! My prayers for them and their families will continue. Your fruits of the Spirit were obvious as was your love for God. I’ll always remember our times together, chaperoning at Sumner Academy, raising our children, loving the Fox family through their time of need. Rest In Peace my Friend💝

Patrice was a great friend and confidant – we shared many laughs and tears over the years. She and Michael were great cooks and I could always count on her for new and great recipes. You will be missed and loved by many. Rest In Peace my dear friend.

I SEND MY THOUGHTS AND PRAYERS TO PATRICE’S FAMILY.PATRICE WAS IN THE ST.STEPHENS CHOIR WITH ME.I LOVED HER SWEET.VOICE AND I SO ENJOYED HER BEAUTIFUL POSTS ON FACEBOOK AND I TOLD HER I LOVED THEM.I ADDED HER NAME TO THE BOOK ON ALL SOULS DAY AND PRAYED FOR HER AND YOU.GOD HOLD YOU IN THE PALM OF HIS HAND.