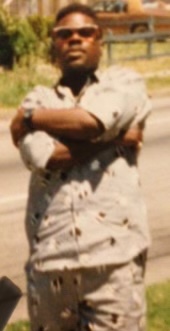 Orlando was a jack of all trades, there wasn’t anything he couldn’t do from housing, electrical work, & car repair just to name a few. Those who knew him called him various names but “OG” was the one we called him most. He had tons of hobbies from basketball, pool, playing cards and fishing. He had a love for cooking. His favorite food being fried chicken and don’t forget the spice to go with it, with the sweet spot for watermelon. He Enjoyed football and the Dallas Cowboys was his all time favorite team. Laughter was how he showed his love. He has such a distinct laugh that made one laugh even more. It sounded a little something like this [insert laughing sound]. His love continues through his Family and Friends.

My condolences to my nieces and nephew and the family. May God wrap his arms around each everyone of you. I love you much. 🙏🏼💜🙏🏼💜🙏🏼💜

My thoughts and prayers are with the family. I hope you all find peace through this difficult time and know that you are surrounded by loving friends and family.

I’ll always remember you by your smile, sense of humor and love for your children! Rest In Paradise Orlando! You will be missed!

I’m going to miss you Orlando you always kept me laughing I’m always cherish the memories i had with you love you always ❤️🌹R.I.P OG prayers going out for your family and friends 🌹🌹❤️❤️

My Bro you are missed so much fishing will never be the same and our favorite burrito spot. Rest Peacefully My Brother. My nieces and nephews you know I’m here love y’all so much

Rest in Power, and I will most definitely whip the hell out of my pancake batter. 💐❤️🕊️

Sorry for your loss, our continued prayers 🙏 are with the family…. love y’all

You’ll truly be missed Big O many many laughs we all shared together and the love you have for your children was so beautiful. Rest in Love Big O sending my sincerest condolences to all of the family and friends much 💙

Orlando you were my road partner where I had to you were right there with me. Cooking on the grill eating my sweet potatoe I’m gonna miss you Love ya Rip