Norman Emerson Allen, 95, of Newport News, VA, reunited with the love of his life on November 1, 2022. He was born in Worcester, MA. He was the son of Harold D. Allen and Marion E. (Bain) Allen. Norm was predeceased by his wife of 70 years Silvana (Volpato) Allen, his parents, brothers Calvin and Robert and half brother Terry.

Norm enlisted in the Army at 17 and was stationed in Italy with the Trieste United States Troops (TRUST) where he met the love of his life, Silvana; Germany, Greenland, Vietnam, and various bases in the U.S. He was a senior paratrooper and expert marksman. He retired to Newport News after 23 years of military service. Norm also retired after 20 years with GEICO working in the Hampton office.

Norm and his bride became mall-walkers and Norm logged over 10,000 miles, traveled around the U.S. visiting family and friends, went to Hawaii frequently and traveled to Greece. For their 50th anniversary, they went to Italy to the same church that they were married in.

Norm loved life, laughter, and food. He will be remembered for his wit, comedy, sweet tooth, and positive attitude. He never met a stranger he didn’t like and was always “fit as a fiddle”, felt “better than the weather”, and “if he felt any better he would be twins”.

The family would like to express special heartfelt thanks to longtime family friends Ute Lovell and Helen Chewning, and wishes to acknowledge the kindness and support from Interim Healthcare Hospice, and Altmeyer Funeral Homes.

Full military services will be held on Monday, November 28th at 1 pm at Albert G. Horton, Jr. Memorial Veterans Cemetery. Altmeyer Funeral Home-Denbigh Chapel is assisting with arrangements. In lieu of flowers, the family requests any contributions made to mark the passing of Norman be directed to the American Heart Association, American Cancer Society, or a charity of your choice. 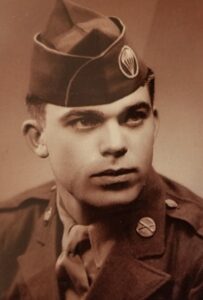 My Condolence’s to Andy, Pat,Claudette,Debbie,and Linda, I loved your Dad, he was a very kind and fun-loving Man, I loved his sense of humor, every time we met, he always said hello young lady, and tell jokes, I was blessed to of been there and help Andy and know Mr. Allen was very well taken care of to the end of his time on earth. I am so glad; he is now with his BRIDE who he talked about all the time and how much he missed her. R.I.P.

You taught me so many things, and the way you instilled these things in me I will never forget them. Our long volksmarches, the way you would help me pass the time when all I wanted to do was quit.. because of you I know every Capital to every US state… The silly antics that you had to help me remember each one.. JUNO… you were so proud when we walked across the James river bridge and I made the news cause I was so young. The silly jokes you used to tell, when I was younger I thought were so corny but now that I’m older your goal was just to always put a smile on someone’s face… When I was younger I wanted a mechanical pencil so bad and you made me right an ungodly amount of handwriting exercises to so-called pay for the said pencil because nothing in life is free.. at the time I thought was really stupid the pencil is only like eight bucks but the lessons I got out of all of that, from handwriting to nothing in life is free to if you really want something you’ve got to work for it. The lessons is where it was at.. to the Summers of teaching us how to swim and let me have my friends over.. to your unwavering patience you had with everyone…. I believe I’ve told everybody I’ve never seen you mad or upset or angry or really even say a cross word up until your last few months…. Our never ending trips to Busch gardens.. the trip to Disney world in the hoopty… Yep you’re old van.. the old El Camino that used to burn the crap out of my feet. To building the 3D puzzle when they first came out of the Notre Dame cathedral. To when I was a little kid and stayed real sick you always came to play board games with me… And I never understood why you would do that weren’t you afraid of ever getting sick?.. You used to say nope I’m healthy as an ox … The board games that you taught me taught me how to be quick-witted and fast with my numbers.. and I’m forever grateful for everything you taught me and I know I’ve probably missed a lot… I’m so glad I came home in July to be able to have a genuine see you later conversation with you.. and I’m so thankful that my kids will remember who you are.. Chelsey has ur card playing knack. But now I know you are in a better spot.. traveling all over eating fine foods but most of all back with Nona! As your last few years you’ve missed her greatly. And now you’re at peace. This is not good bye but see ya later alligator. After while crocodile. 🙂 Happy Veterans Day! Fly high… U don’t need a parachute for this jump! Love and miss u forever.

The knowledge I learned from u the card games we played . Thank u for your service . Happy early Veterans Day . Love u to the moon and back u sure are going to be missed tell nonna she is missed love u guys . Rest In Peace until we meet again .

U sure are going to be missed love u always Rest In Peace norman love you.

Your will be greatly missed, Dad. Thank you for being a wonderful husband to Mom, father, grandfather, great-grandfather. You are now with Mom for eternity.

May your memories of Norman Emerson Allen, give you peace, comfort and strength…