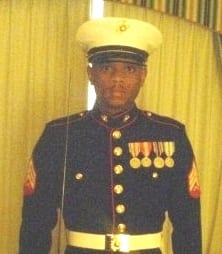 Nathaniel Norris, Jr. III, 36, passed away Saturday, February 27, 2016. He was a loving husband and father to his children. His oldest daughter is a high ranking officer in ROTC and maintaining straight A’s, his son is pursing boxing and maintain Honor Roll, while his two youngest daughters are in accelerated elementary schools.
He served in the United States Marine Corps until 2009, afterwards obtained a job at the Newport News Shipyard. In 2010 he was diagnosed with cancer. His ability to walk was diminished and he wasn’t able to sit up on his own. His arms were the only movement he could feel whenever he would bent over. MRIs and CT scans were done to determine what was causing the severe back pain. The doctor told him he was paralyzed due to a tumor the size of a quarter on his spinal cord. As the tumor grew, it would continue to pinch the spine. At that time, he was diagnosed with plasmacytoma. A 12-hour surgery was performed to remove the tumor. He had a titanium rod and screws surgical inserted into his spine for stabilization. He had radiation therapy and physical therapy, because he needed to learn how to walk again. He wore a neck brace for several months and used a walking cane.
His health had begun to improve since his surgery and he enrolled at ECPI University for an Associate’s Degree in Computer Information Science with a concentration in Network Security. He maintained a GPA of 3.7, made the Dean’s List several times, and held perfect attendance. He started a business called Compunate for computer repair and networking services and worked part-time as a security officer.
While on patrol his leg broke and he was taken to the hospital. The doctors indicated he had Multiple Myeloma, cancer of the bone. He had surgery to repair his leg and three months later he was back in surgery due to his left ankle becoming weak. Numerous radiation treatments and chemotherapy followed.
He continued to strive through to pursue a second Bachelor’s Degree in Web and Software Development at ECPI University. He had previously graduated with a Bachelor’s in Network Security. While pursuing his degree he was inducted into the Newport News Track & Field Hall of Fame.
The second bone marrow was scheduled for fall of 2015 but wasn’t performed due to a 10% chance of remission. Due to his appointments he had to take a medical leave from school to maintain his treatments.
Shortly after the New Year rang in, his health appeared to changed slowly. He was admitted to the hospital and was put on dialysis for three days a week with a new treatment of chemotherapy. The new therapy wasn’t working but the dialysis continued accompanied by severe nose bleeds. It when then known that the Multiple Myeloma was now Leukemia. He was released from the Veterans Hospital and the remaining weeks he was in and out of three different hospitals. His last hospitalization he underwent two nasal surgeries to stop the excessive bleeding. He continued dialysis and the day after the Super Bowl he was discharged and admitted to Compassionate Care Hospice services. He remained at home until he stepped into the Lords hands.
Nathaniel will be truly missed by all his family and friends.
The family will receive friends from 6-8 p.m. Thursday, March 3, 2016 and a funeral service will be conducted 11 a.m Friday at Altmeyer Funeral Home’s Denbigh Chapel.
Memorial Donations for family assistance may be made here: Nathaniel Norris Jr. III Memorial Fund

Condolences to the Norris family. Our thoughts and prayers go out to your whole family. Psalms 147:3 says God, “heals the broken hearted, and binds up their wounds.” May God bring you comfort and peace.

Blessings to the family of the dear departed. Only God’s Peace will give you comfort at this time. Cherrsh your memories. Know with his many health issues Nate is called from labor to reward. Prayerfully, Mrs. Maxine Husbands-Brown (Lamia’s God-
mother) Plainfield N J

Great Leader , Great Marine and even better person thank you for helping me when i was lost in life thank helping me check in into my first AR duty station. You will be missed and the world will not be better place without you . My Condolences to the family

My Condolences to the family !! It was fun running Track with you in high school

May he rest in peace. May God watch over you and your family fellow Semper Fi.

My deepest sympathy goes out to your family. You were a great Marine. May God give your family comfort and peace that they seek. Rest easy.

R.I.P. Devil Dawg. My sincere condolences to the family and friends. You will be missed. Semper Fidelis

R.I.P Devil Dawg. My sincere condolences to his family & friends. He will be missed. Semper Fidelis.

It was an honor to have served in United States Marine Corps with this fine going man. He will be truly missed.