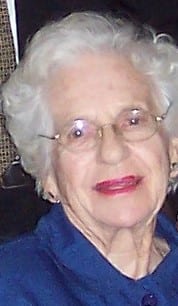 Natalie I. Bayer passed away on March 5, 2017. She went in faith to join those she treasured in life, who predeceased her, including her husband of 43 years, James Bayer, who died in 1988, and her parents Ronald and Hilda Buckrell. She leaves behind her beloved only son, Stephen as well as relatives and dear friends in New Zealand and many close local friends, of long standing. Natalie was born in Nelson, New Zealand in 1922 and she met her husband during WW2, when a large contingent of United States Marines was stationed there. In 1949, she came to the United States as a war bride on the SS Lulerne. Natalie was an enthusiastic Red Cross volunteer in the Optometry section of Boone Clinic for 21 years. She was a member of the Catholic community of the Amphibious Base Chapel as well as a member of the former Ladies’ Auxiliary, Unit 99 of the Fleet Reserve Association. Her hobbies included gardening and knitting. She was well known both locally and nationally for crafting unique, heirloom quality sweaters. Her work was featured in numerous shows, and in 2010 her artistry garnered her Grand Prize in a national competition sponsored by Lion Brand Yarn. Politically active, Natalie worked on campaigns for numerous Republican candidates. Her philanthropic pursuits included supporting organizations working on behalf of animals, active duty service personnel, and veterans. Natalie had a special love for animals, particularly of her two dachshunds, who were her constant companions for a number of years.
A memorial service will be conducted at Altmeyer Funeral Homes, Southside Chapel at 2pm, Sunday, March 19, 2017. In lieu of flowers, donations may be made to Hope for Life Rescue, Inc. 610 Jack Rabbit Rd. Virginia Beach, VA 23451 by going to https://www.tmcfunding.com/search-memorials/campaign/1228?layout=single#.WMQtWKS_OJk.gmail.

Natalie was a neighbor & friend for many years. She loved to work in her yard, and stated many times she hoped ” God would take her while she was cutting the grass!”! She was an excellent baker and I remember many Christmases she bring us cookie trays. She knitted the most beautiful sweaters, I still have my daughters sweaters and my grandchildren were lucky enough to get onetoo! I count myself lucky for having known her and will miss her.

Steve–please accept our heartfelt condolences as you grieve your mother’s passing. You and she shared a close and loving bond. We know you will miss her but trust that your pleasant memories will comfort you now and in the future.

Aunty Natalie was such a gifted lady. I remember when she wrote to my mother (Margaret, Natalie’s cousin in New Zealand), and told her of the knitting competition for Lion Brand. My Mum told her she should enter, as she was likely to win. Aunty Natalie was not so sure, due to all the possible entrants.
However, it was a great joy when Natalie wrote to Mum to tell her she had won first prize. My Mum was so proud of her, and told all her friends in New Zealand of Natalie’s success. She was a special person and held dearly in my mothers heart. May she rest in peace.

My sincerest sympathies go out to Steve as he grieves the loss of his beloved mother. Natalie was a blessed woman to have such a loving and caring son who was so attentive to her every need. The Bible tells us to honor our father and mother and what a testimony it is to the love that Steve had for his mother. I will never forget the flowers he brought to my mother and grandmother when he came to my house to visit me in high school. Not too many 16 year old boys are that thoughtful, but Natalie raised a sweet respectful young man that turned into a loving and caring man, always putting others first. You are in my thoughts and prayers, Steve.

It’s with heavy hearts that we say good-bye to a friend of 60 years, who was a wonderful lady. We’ve been blessed to have her in our lives and memories of happy times we shared will linger forever. Our sincere sympathy to Stephen as he grieves the passing of his dear mother. May he be comforted in knowing that she’s well and happy in her heavenly home, where she has been united with family and friends who’ve gone before her. May God be with all who mourn Natalie’s passing.