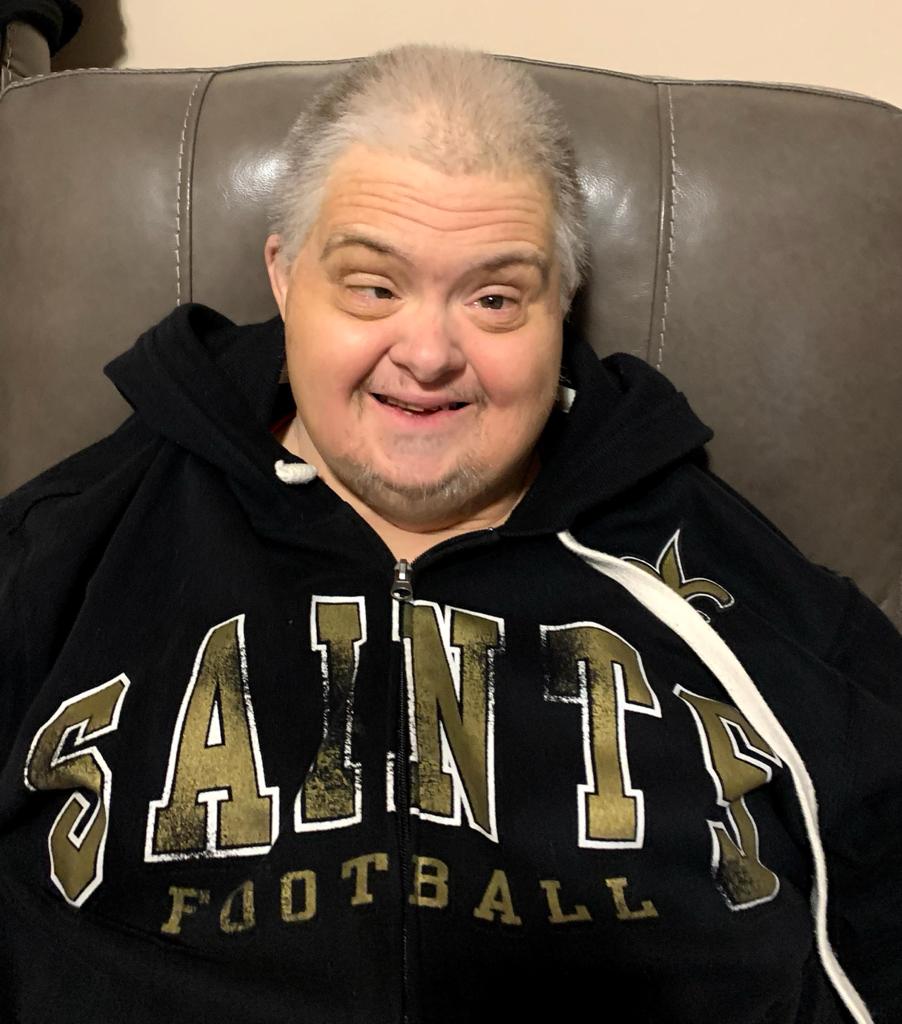 On July 6, 2022, Michael Matthew Brown, loving son, brother and uncle passed away at the age of 49. He was born on November 25, 1972 in Hattiesburg, Mississippi to Taswell and the late Janice Brown.
Shortly after his birth, Michael was diagnosed with Down Syndrome. The doctor told his parents that Michael would not live to be three and suggested Michael be institutionalized. His parents adamantly refused that suggestion, to the world’s benefit!
Michael touched everyone he ever met by being the sweetest and most loving person because he was not affected by earthly biases. He only saw the best in everyone and his one goal in life was to make everyone smile. Everyone he met either became “The Man” or “Supergirl”. Michael
had an infectious laugh and a sense for the exact moment someone needed a hug or to watch an episode of Friends together. His latest adventure was teaching dance lessons.
Michael’s memory was extraordinary, shown by the fact that he knew everyone in our family’s birthday (including aunts, uncles, cousins, 2nd cousins and so on!) and what day of the week it would fall on in the current year. He would start looking forward to his next birthday the day after his current birthday and made sure everyone’s birthday was celebrated each year. Sunday was his favorite day because he absolutely loved being with his Happy Class friends and learning about the Bible and Jesus at Liberty Live Church. He also enjoyed buying coffee and sausage biscuits for people on Sunday and was sad when Liberty began providing coffee for free on Sunday mornings.
Anyone who knew Michael knew his favorite sports team was the New Orleans Saints, if not by what he said, then by what he was wearing. He also loved the Georgia Bulldogs, much to the chagrin of his family. Michael also loved to collect movies and music, and would share the digital copies with his
family. His favorite show to watch was Everybody Loves Raymond, so much so he named his sister’s fish Ray and Debra. Whenever he wanted to make someone laugh or smile, he would always ask what their favorite movie or song is, and then show his current movie obsession or CD purchase and tell them that was their new favorite.
Michael was preceded in death by his mom, Janice. He is survived by his father, Taswell Brown, his sister, Melissa (Kevin) Rivers, his brother, Todd (Natasha) Brown, nephew Josh (Sam) Rivers, and nieces Kelsey (fiance Josh) Rivers, Lindsey Rivers, Lina Brown and Ally Brown, who all loved Michael very much.

Visitation will be held July 23, 2022 at 11:00am followed by a Celebration of Life service at
11:30am in The Chapel at Liberty Live Church in Hampton, VA.

It won’t be the same without your precious Michael sitting at the front of the church, so ready to hear the Lord’s word. I know I will miss his presence. God bless you all.

Melissa and all, I never met him, but I feel I know Michael pretty well from this beautiful obituary! I look forward to meeting him in heaven! Praying for the Lord’s peace and strength to help you all through this time of loss and reflection…

Michael was a loving and carefree person. He left a sweet memory with me. He will be remembered with loving thoughts.

All of the staff in the ICU send our love and prayers to the family. While we never want anyone to need to be at the hospital, we loved having Michael on our unit. Even when he didn’t feel good he always gave us a smile. The love you surrounded him with was felt in the room at all times. We all like to claim we were Michael’s favorite – because he was ours. May you feel surrounded by God’s grace and healing. Chaplain Barb

Hey Melissa and entire Rivers Family — Debbie and I are sorry for your loss; our thoughts and prayers are with you. I know Michael was a special guy to you all, and to everyone he met. His memory will live on with you all forever. And I will predict that the Saints will play with some extra inspiration this coming season!