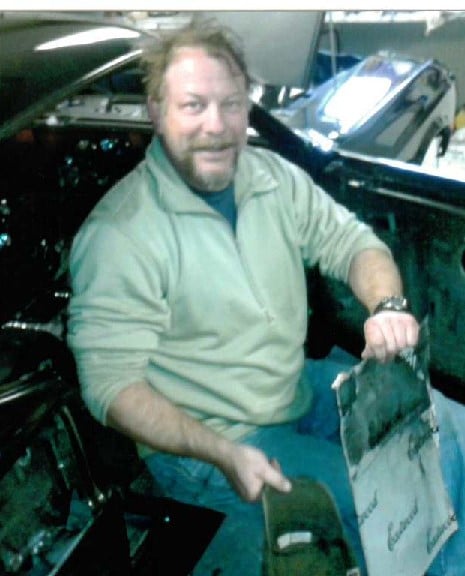 Michael K. Whitaker, 55, died in his sleep on Aug 15, 2022, at his home in Virginia.
Mr. Whitaker was born in Maine, where he lived until he joined the United States Army in 1987. He served in the army Aviation field. Michael was awarded many medals and citations during his 25 years of military service; The Bronze Star Medal, Air Medal, Afghanistan Campaign Medal to name a few. Michael retired from the army in 2012.
Mr. Whitaker had many hobbies, kayaking, hiking. His favorite hobby was rebuilding classic vehicles. Michael was very mechanically inclined and could fix anything.
Michael was a true joy to be around; professional, knowledgeable, patient, caring, funny, and willing to do anything he could for those in need.
Mr. Michael K. Whitaker was preceded in death by his father, Harold Whitaker. He is survived by his loving wife Tamar, and beloved son Dayton, his mother and stepfather; Judy and Ozzie Ricks, brothers; Todd, Craig, Johnny, and his sister Christina.
Mr. Whitaker will be cremated, and his ashes will be interned in Arlington Cemetery at a later date. Services will be held when he is laid to rest in Arlington. He willed be missed beyond measure.

My heartfelt condolences to Tamar, Dayton and survivors. Mike was a consummate warrior and master of his trade on and off duty no matter where we were at the time. He always had time to assist a fellow soldier no matter how long the day or late the night. I am grateful for the time I shared with him. Blessings and aloha John Leong

Our hearts go out to Tamar and Dayton. Mike and I got to know each other over the past 5 years and became very good friends. He and Tamar were there for me and my wife when I went through some serious health troubles. We spoke often, vacationed and trained together. We shared a passion for family, freedom, aviation and cars. We bantered back and forth with lots of laughter. I have so many memories that will last my lifetime. A genuine American, a true friend that that is as free as a bird now. Rest in Peace Mike, I’ll miss you Brother.

Mike was truly a unique individual. He never lost his temper, never overreacted to a situation, and was generally positive. I’m am truly blessed to have served with this great man. I truly cannot believe that he is gone. My prayers go out to his lovely wife and his family. R.I.P. Brother.

Our deepest condolences to Tamar, Dayton and the Whitaker family. It was an honor to have served with Mike in the Army. You are in our thoughts and prayers, and we are so sorry for your loss.

He was always willing to lend a hand, a laugh, and great be with on the road. Truely a quiet professional and it was my honor to serve with him defending our country. May God bless Mike and his family…

My sincere condolences to the Whitaker family. Mike was a great man and a very good friend. I had the pleasure of working with him and sharing our love for classic muscle cars. Mike will be greatly missed.

I am sorry for your loss, Mike was a great man. He also had a smile on his face when would walk into my office.

My condolences to Tamar and Dayton. Mike will be missed, please know that he had an impact on our nations security.

I spent many hours in an aircraft with Mike. He was a true mechanic on and off duty. I have plenty of memories and some pictures of him in the aircraft. I will cherish them. Mike would always come around with the preface “Hey Buddy”’. Always eager to help and with me, he would always have this head shake like I can’t believe you are doing that. If you knew Mike you would know that look, ok maybe it was just me.

Mike you will be missed.

Patriot, Warrior,Mentor, and such a patient professional who so often helped me and others. 19 years on and I’m still driving the perfect classic mustang he helped me get – it’ll always remind me of him. Prayers for the entire Whitaker family.

Mike Whitaker was one of America’s finest soldiers. Serving with him was my honor. Rest in Peace Mike. Until we meet again. Condolences to the entire family.