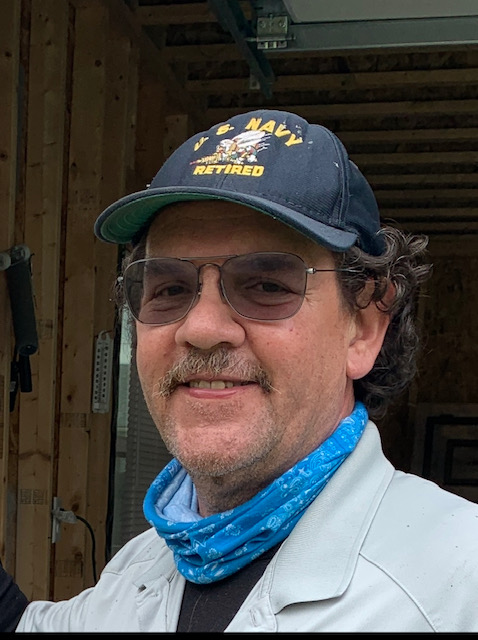 Michael “Mike” Hagenberger, First Class Construction Mechanic-Retired, US Navy, 62, of Norfolk, Virginia, passed away on September 13, 2022. He was born in Portsmouth, Virginia to the late Joseph E. and Nicoletta M. (Blanda) Hagenberger.

Mike’s military career spanned many years and a few different rates, beginning as an Aviation Electronics technician before becoming an Aviation Fire Control technician, working with the F-14 Tomcat. He spent time as a Gate Sentry Supervisor, which led him to switching rates to Master at Arms. He finally found his home with the Navy Reserves in the rate he retired with, Construction Mechanic, with the Seabees of Amphibious Construction Battalion 2.

Civilian life brought many career opportunities as well, most of them utilizing is mechanical skills. He was a long-time forklift and industrial mechanic, and he also spent some time as a Sheriff’s Deputy in Norfolk. His last job was with the Norfolk Botanical Gardens, a setting too beautiful for words. He treasured the friendships he made there and was proud of the skills he was able to share with his coworkers.

Altmeyer Funeral Home has worked with us to arrange the donation of Mike’s body to the Virginia State Anatomical Program where, even in death, others will be able to learn from him. A celebration of life will be planned for later in the year when more friends and family will be available to attend.

“Perhaps they are not stars, but rather openings in heaven where the love of our lost ones pours through and shines down upon us to let us know they are happy.”-Anonymous

My condolences to the family of Michael Hagenberger. I remember him from Norview High. A great Man. May God be with you all. Francis W. Howell

To Mike’s family,
I went to Norview with your dad. We were in NJROTC together. Mike was always funny and kind. Saw him here and there over the years. Earlier this year we chatted on FB. Sending prayers for healing, comfort, strength and peace in dealing with your loss. He was a good man. Go Navy! God Bless!

Anna and family, I am so sorry to hear of Mike’s passing. May his memory be a blessing to all who knew him. Draw your strength during these difficult days from the Lord!

It was a pleasure to serve with Mike at ACB2. You will be missed brother. May God bring comfort your family at this difficult time.

It was an honor to have served with Mike at ACB2. You will truly be missed by family and friends. Fair Winds and Following Seas CM2, always in our hearts.

It’s sad to hear of our Shipmate’s passing. Mike was a mentor and friend of mine. Rest easy, Seabee. We have the watch.

I had the pleasure to serve with Mike for many years at ACB2. Fair Winds and Following Seas CM2, you will be missed.

Mike will missed by all his Seabee brothers and sisters. Blessed be brother. Fair Winds and Following Seas.

Sorry for your loss.Mike was very funny and Loved his Family. He Loved to grill out. He will be Greatly missed.Love and Prayers to all of you.

Anna and family,
You have all been in our thoughts and prayers through this journey and continue to keep you in them. While we are sorry for the loss of Mike we also know God doesn’t make mistakes and he is up there watching over. He taught you and prepared you well and now he rest with the Lord.