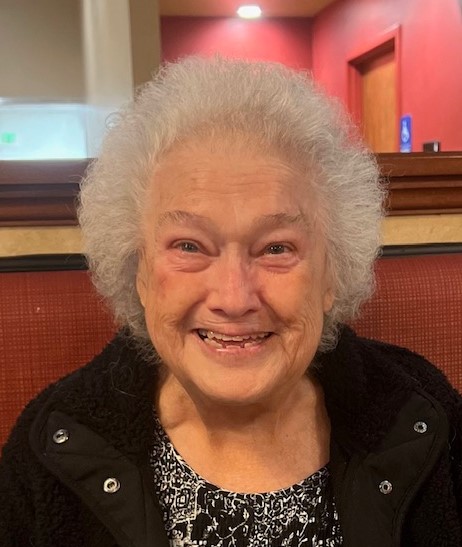 Mattie Bell Cahoon, 88, went to be with her Lord and Savior in the early morning hours of January 16th, 2022. Mattie was the youngest daughter of William and Etha Hines. She was born in Virginia Beach on July 1st, 1933.
Mattie was preceded in death by her loving husband Roger Cahoon Sr., parents, brother Blane Hines, sister Golda Hines, brother Jessie Hines, sister Madline Smith, sister Marion Lee Terry, and sister Mary Elizabeth Pittman.
Mattie is survived by her children; Roger Cahoon Jr. (Connie) of Manns Harbor NC, Pam LeMaster (Clint) of Virginia Beach, and Connie Lowe (Asa) of Chesapeake, grandchildren; Joshua Cahoon, Caris Hill, Jordan Cahoon, Jennifer Young, Kayla Yeremin, Lauren Tuttle, Asa Lowe III, and Bradley Lowe, and 16 great grandchildren.
Mattie was a very Godly woman and was an active member of Heritage Church for more than 15 years. With the church, she loved serving and helping people in her community. One of her greatest treasures in life was working in her garden and doing yard work. Her absolute greatest joy in life, however, was baking for her grandchildren. Mattie was known for her sweet potato biscuits, and was always asked by her grandchildren to make her famous cakes. Her ham soup was also a staple of family gatherings.
A service to celebrate the wonderful life of Mattie will be held on January 19th at 12pm, with a visitation an hour prior. A graveside committal service will be held following the service at Colonial Grove Memorial Park.
The family will return to the church for food and fellowship following the graveside service

Aunt Mattie Bell was one of the Godliest women I have ever known. We know she was so happy to meet Jesus and Uncle Irby . Our thoughts and prayers are with your family.

Your mom was so sweet. Praying for your family at this time.

Connie, Pam and Roger. We were so saddened to hear of your mother’s passing. I have such wonderful memories, and so happy she was able to spend some time with my mom during the holidays. Sending our love and prayers to you all.
Lynn and Marv Snyder

Dear Connie, Pam and Roger. We were so saddened to hear about your mother’s passing. We all have precious memories of her. I’m so glad she got to spend some time with my mother during the holidays. Sending our love and prayers to you all.
Lynn and Marv Snyder

I guess me in my cowboy boots and a little white dress that’s hard for you to resist and won your heart .♥️♥️Aunt Mattie Bell you will be missed. Want to thank you for giving to the Lord,. Your loved for Jesus was very relevant and it showed I will always remember that..❤♥️

Mattie Bell was one of the most loving Godly Woman. I spent many hours with her family in our teen years and their love for Christ was something I have always treasured. Roger, Pam and Connie I know you will miss her terribly but my what a homecoming. We can only imagine! Love and prayers❤️

“Grandma”as I lovingly cslled her was one of my favorite people, she had a smile that was infectious snd a faith like nothing I had ever seen before. She will be truly missed. Condolences to the fsmily.

I have known Sister Mattie Belle all my life. I always thought she was so beautiful! She was always pleasant and and encouraging to me. William loved her sweet potato biscuits and I did too. She has left a great legacy for her family. Love and prayers for her family.

She was one of the most dedicated, loving and kind people we have ever known.