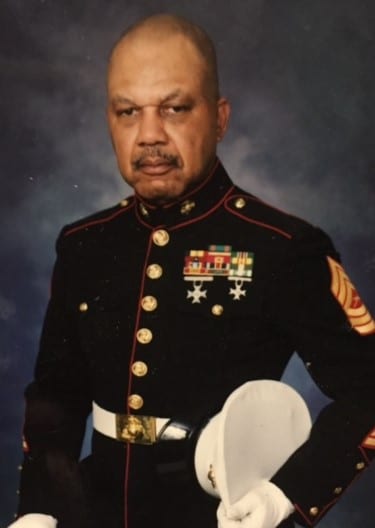 Master Sergeant Emanuel Brown Jr. USMC (Ret.), entered eternal life on Sunday, January 29, 2017 at the age of 69. He was born December 21, 1947 in Guantanamo Bay, Cuba to USN Emanuel Brown Sr. and Alliene Brown.
Daddy was a hard-working man with a high level of commitment to his family and his surrounding community. He had an extensive career in the Marine Corps serving 27 years and 15 years as a Deputy Sheriff for Norfolk, VA. After retirement, he spent most of his days with his wife and his beloved dogs.
Left to cherish his memory are his children, Antoinette Baker, Kimberly Wilson (Dwight), Emanuel Brown, III and Liaza Y.K. Brown; grandchildren, Vaughan Brown, Shai Baker, Austin Eitel and DeMarcus Wilson and great-grandson Vaughan Brown Jr.; his siblings Kenneth Brown (Viola), Leonard Brown (Barbara) and Eugene Brown. He is further survived by his aunts, uncles, nieces, nephews and many close friends.
A visitation for MSgt. Emanuel Brown Jr. USMC (Ret.) will take place in Altmeyer Funeral Home Southside Chapel from 11am to 1pm on Saturday, February 11, 2017 with the funeral service beginning at 1pm.
Online condolences may be offered to the family at www.altmeyerfh.com. Burial will take place in Quantico National Cemetery with full military honors at a later date.

Mr. Brown was one of the first people we met upon moving to the neighborhood in Norfolk, VA from Oklahoma. We’ll always remember him and Gitmo patrolling the neighborhood. He gave us a safe feeling knowing someone cared enough about the neighborhood and all who resided within. He was very welcoming, kind and warm and we felt like we’d known him for years although we had just met. Our deepest condolences to the family.

The Brown Family your in my thought and prayers.
I had the HONOR of working with Deputy Brown at the Norfolk Sheriff starting in 2003 until his retirement. During that time he due he was referred to as Mr. Brown due to the respect he showed, gave and received from other. It did not take long for him to discover I was a retired Navy Man, being a TRUE DEVIL DOG. we joked about the topical Navy vs. Marines. We often discussed jumping on a MAC Flight and going to ITALY with our wives, covering the logistic that would be required to facility the trip. The trip never came to pass. You were and always will be in my thought. The next time I make that Trip TOP and Mrs. Brown will be in my thoughts.

Dear family, you have my heartfelt condolences. May God the Father of tender mercies (Psalm 83:18) strengthen you all during this difficult time and may your cherished memories comfort you as you await His loving provision when you may be reunited with your dear loved one again (John 5:28,29).

My deepest sympathies go out to the Brown family. May God give you peace and comfort that you seek during this transition period.

Mr.Brown was a fixture in our neighborhood first many years. He was certainly a person to count on if something was needed by anybody. I came to know him and Mrs.Brown from his daily dog walking and because he was so friendly. My condolences are sent to his family. I know you’ll miss you Dad

As a fellow retired Marine, I worked with Master Sergeant Emanuel Brown at the Norfolk Juvenile Courts. Emanuel was always a very positive, easygoing, uplifting and professional man/worker. He was always courteous and concerned for others’ welfare and improvement. Emanuel was a “true hero” and positive role model for others, especially the youth and families that he worked for/with over the years. He will be truly missed. May God bless him and his family. My sincere condolences to the Brown Family.
John L. Horton (Sgt. Major, USMC, Retired) and Family

My heart goes out to the entire family during this time. I had the pleasure of being in his presence on several occasions and I know that he was a good man, who loved his family dearly. I know that this will be hard to deal with but understand that everyday gets easier. Lets all just follow in his ways and do right by him. He is looking down on us, making sure we are safe. He will truly be missed.

My prayers and condolences are extended to the Brown Family; I worked with Mr. Brown at Norfolk Juvenile and Domestic Courts. He was a gentleman who loved his wife and his children and was proud of his family. Truly, he will be missed; Matthew 5:4- Blessed are they that mourn: for they shall be comforted. Earth has no sorrows that heaven can not heal!

Emanuel was a good neighbir to my parents who lived around the block. My dad enjoyed talking with Emanuel especially about his military service. My folks always kept dog treats for Gitmo even though they had no pets! He was a gentleman, a good neighbor and friend and he will be greatly missed.

I worked with Brown and served on the honor guard with him. He gave me my first off duty part time job. He was an awesome man. Rest in peace Top.