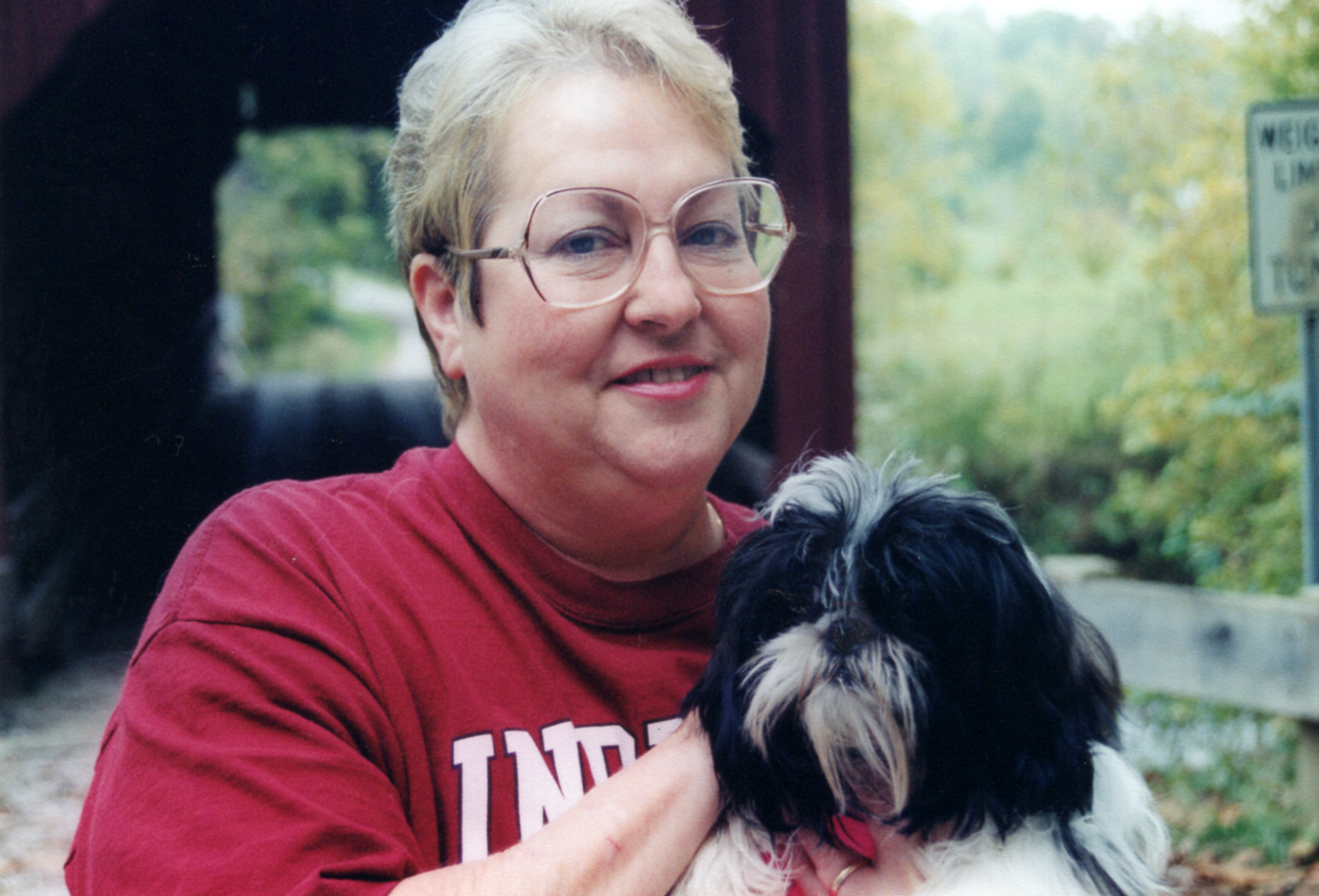 Ellen passed away peacefully in her home on Sunday, May 15, at 6:30 am surrounded by her three children and her husband of 47 years.

Mary Ellen Kennedy, née Shawcross was born March 2, 1948 to Dolores Hazel (Ogle) and Robert Leroy Shawcross in St. Louis County, MO, joining older brother Robert Marion “Bobby” Shawcross 7 years her elder. Called Mary as a child, she loved spending time at her grandpa Marion’s farm and playing with her cousins Tom, Dick, John, Jim, and Ricky, who she said looked out for her like brothers.

While a senior at Mehlville High School, Ellen secretly married her first husband before graduating in June 1967. A year later she welcomed her first child, Tiffany (Don). A short-lived second marriage took Ellen and her little girl to San Diego, CA, where Ellen eventually met, fell in love with, and married a handsome sailor from Indianapolis named Kevin. Life in the Navy took the newlyweds first to Honolulu, HI where they welcomed son Scott and daughter Amber (Layne), then to North Chicago, IL, St. Mary’s, GA, and finally, Virginia Beach, VA, where Ellen lived until the end of her life in their house on Minutemen Road.

Throughout her life Ellen had many jobs, often more than one at a time, including babysitting, waitressing, bartending, working at a recording studio, a convenience store, a bank, a police station, and even working construction! But in 1988, Ellen began her career in civil service. She spent 28 years at Human Resource Service Center (HRSC) East before retiring in 2016. Officially she was a classification specialist, but unofficially, Ellen was the office party planner, organizing celebrations, baking birthday cakes, and coordinating Christmas cookie exchanges.

Ellen was an active and devoted mother in her children’s lives. She was a girl scout leader, team mom and assistant coach for many Aragona-Pembroke Little League teams over the years, a frequent parent chaperone for the Princess Anne High School NJROTC program, and a Majority Member and Past-Bethel Guardian of Bethel 17 in the International Order of Job’s Daughters. Many of her children’s friends, teammates, and classmates still remember Mrs. K, or Mom Ellen, fondly for her creativity, her generosity, and her kindness.

Ellen was also a doting grandmother to her four grandsons Brandon, Spencer (Francesca), Sammy & David, and great grandson Ryder. Even though her grandkids lived far from her, she still managed to be involved in their lives, traveling to watch their soccer games, dirtbike races, orchestra concerts, scouting events, special school activities, and attend the occasional birthday party. And of course every holiday and birthday she would send them care packages filled with candies, trinkets, and other themed treats appropriate to the occasion. (Although it was not unusual for these packages to arrive a day or two after the holiday had passed!)

Throughout her life, Ellen loved many dogs. Her favorite dogs from childhood were a black Scottish terrier named Fala, two miniature poodles named Bambi and Puffy-a-go-go, and a cocker spaniel named Black Satin. Her first dog as an adult was also a cocker spaniel, named Buffy, who tragically passed away too young from a brain tumor. But her next dog, Toby, a Lhasa-Poo mix went on to live a long life of 17 years as her devoted and faithful companion. After he passed in 2002, Ellen adopted two shih tzus named Mani and Autumn and then a year later added two more shih tzus, Tommy and Suzy, to the family. This little herd kept her and Kevin company after their children had all left the house. And when Autumn, Mani, Suzy, and Tommy eventually passed after long lifes, Ellen couldn’t help but fill the holes left in her heart with two new faithful companions, her playful Teddy and sweet Desi, who kept her company every day until her very last.

Ellen loved theme parks. She loved the rides, the shows, the food, and the gift shops. For years she had season passes to Busch Gardens Williamsburg and loved taking her children and grandchildren every time they were in town visiting, and dragging Kevin along whenever they weren’t. She also loved Disney, visiting both Disneyland in California and Disneyworld in Orlando FL several times each.

She loved camping her whole life, though in her later years she traded in her tent and sleeping bag for a luxury RV. She appreciated the quiet, calm, and slower pace of the woods without telephones. But, she always demanded a TV with satellite in her RV.  She enjoyed spending the days on the boat watching her kids battle one another on the tubes or accompanying Kevin on his fishing trips, and then ending the day with one of her elaborate campfire meals.

Ellen will be remembered fondly by her family for her amazing creativity, including the many years of homemade Halloween costumes, birthday cakes, and elaborate holiday decorations. We’ll always remember her love of games (especially Tripoli), musicals, and the color purple and all things “bling”. We will never hear Abba, Cher, Bette Midler, Celine Dion, Barbara Streisand, Tina Turner, or The Carpenters without thinking of her and remembering her singing along loudly to the radio during one of our many long family road trips.

Ellen is survived by her husband of 47 years, Kevin; her three children Tiffany (Don) St. John, Scott, and Amber (Layne) Kent; her four grandsons Brandon, Spencer (Francesca), and twins Sammy and David; and great-grandson Ryder. She is preceded in death by her father, mother, and brother.

According to her wishes, Ellen’s cremated ashes have been combined with the ashes of her beloved dogs Mani, Autumn, Suzy, and Tommy. These will be spread by the family privately at a later date.

Ellen’s memorial service will be officiated by longtime family friend Amanda Steadele at the Altmeyer Funeral Home’s Southside Chapel location at 5033 Rouse Drive in Virginia Beach, VA, on Monday, June 13 at 1 pm, with a reception to follow where we will celebrate Ellen’s life by enjoying on some of her favorite treats, including Gooey Butter Cake, Jelly Belly jelly beans, and Krispy Kreme donuts. Please consider wearing purple to the memorial service in honor of Ellen’s favorite color.

Those wishing to make a donation in honor of Ellen’s memory can donate to your local animal shelter or the American Diabetes Association.

Ellen Kennedy, your obituary says everything to be said about you. From working together at the HRSC East , you were a dedicated worker with that outgoing loving personality. Always there to help me in any way. You might be physically gone but your memories remain in my heart. Thank you for the times we shared as friends. ❤️

To Ellen’s family, prayers and love from an old coworker and friend from HRSC early 2000s. I only knew her for a short time but have never forgotten her!

My condolences to the family in the passing of Ellen. May God strengthen you during these difficult days. Rest on Ellen. (HRSCE) East

Amber, Scott, Tiffany and Kevin, I’m just reading about Ellen’s passing. My heart is very sad for your loss. Your mom and dad hold a special place in my heart as they were always so welcoming to me over the many years we have been friends. We know that these days will eventually come as the years pass by, but it doesn’t make it any easier to accept. I know your mom loved every minute of being your mother and the surrogate mom to so many wayward teens over the years. I cherish the trips they took me on, the snacks she fed me, the open invitation to join your family for dinners and the welcome invite into her home anytime of day or night. It’s hard to say all of these wonderful things about your mom without including your dad, because that’s the way I always remember them, together, as a team. These next days will be bitter sweet as you celebrate your mom’s wonderful life and at the same time say goodbye to the wonder mom of your family. Please pass my love to your brother and sister and especially to your dad. I love you and will celebrate Ellen’s life as I remember her, a mom and friend to all. ❤️