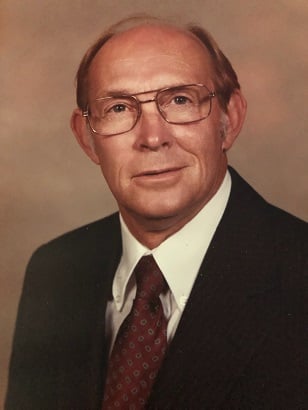 Marvin Dennis Brooks (Mickey) passed away January 1st at the age of 87, surrounded by his family. He is survived by his beloved wife of 65 years, Wanda Scoblic Brooks, and their children Jennifer Smith (Jerry), Jeffrey Brooks (Deena), Kenneth Brooks (Michele); grandchildren Joshua Smith (Angela), Jodie Stevens (Adam), Christopher Brooks (Kasey), Adam Brooks, Ryan Brooks and Jordan Brooks; great-granddaughters Eliana Stevens and Charlie Lynn Brooks; as well as many other relatives and friends.
After attending Maury High School, Mickey began his career as an electrician and eventually became an electrical estimator, work he found so fulfilling that it took him four tries at retirement from different electrical contractors to finally stay retired. He enjoyed staying in touch with colleagues at monthly IBEW luncheon meetings as long as he was able.
Mickey was a charter member of Providence Presbyterian Church. He was an avid golfer and once made a hole-in-one at Cypress Point. Most of all, Mickey was a devoted, loving, husband, father, grandpa and great-grandpa who took great pleasure in rocking babies as his family grew.

We were very sorry to hear of Mickey passing. Our families have know each other since early 1970″s. We have had a lot of fun times over the years and Mickey was always ready for a good time. He will not be forgotten and the time we all had together will be cherished. We love and will miss Mickey.

“Best uncle ever”! Our families have been so close throughout my lifetime that we can scarcely separate the two. So many of my childhood memories, as well as my adult years have included my Uncle Mickey and his family. I can still hear Mickey and my father loudly (lol) debating the pros and cons of unions. I have always loved spending time and talking with Mickey whenever we would get together. He is probably as close to a “second” father as a girl could be lucky enough to have and he will be missed tremendously. I love you, dear Uncle!