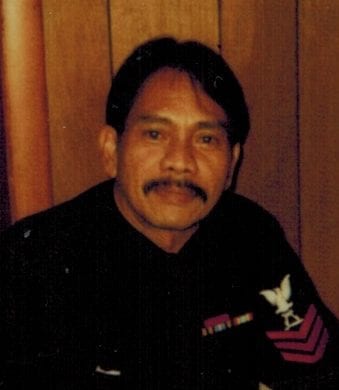 Portsmouth – Mario Abijar Vinalon, Sr., 81, died January 4, 2017. Mr. Vinalon was born in Cebu City, Philippines to the late Fructuoso and Rosa Abijar Vinalon. He was a veteran having retired from the US Navy. Mr. Vinalon later retired from the DOD – Norfolk Naval Shipyard. He enjoyed fishing, crabbing and gardening.
Left to cherish his memory are his loving wife of 55 years, Deloris Faye Vinalon; children, Mario A. Vinalon, Jr. and his wife De of Elizabeth City, NC, Michael F. Vinalon of Naples, FL, Melissa L. Vinalon of Snellville, GA; and Mark A. Vinalon of Portsmouth, VA.; 7 grandchildren and 5 greatgrandchildren.
The family will receive friends at Altmeyer Funeral Home, Chesapeake on Monday from 6:00 pm until 7:30 pm. A funeral service will be held on Tuesday at the funeral home at 2:00 pm. Condolences may be expressed to the family at www.altmeyerfh.com.

Love you soo much and miss you lots! ♥️ Forever with me.

Love you Papa, you are my hero forever…

I love you papa

I love you papa. You made the woman I am now strong, confident, loving, caring ,loving and more. I love and miss you so much papa. Your everything to me.

Sending my prayers and lots of love to you all.
Annette (pharmacy)

So sorry to hear the news… my thoughts,prayers and hugs to you all. Love always Sherri xo

Our deepest condolences and prayers go out to the family.