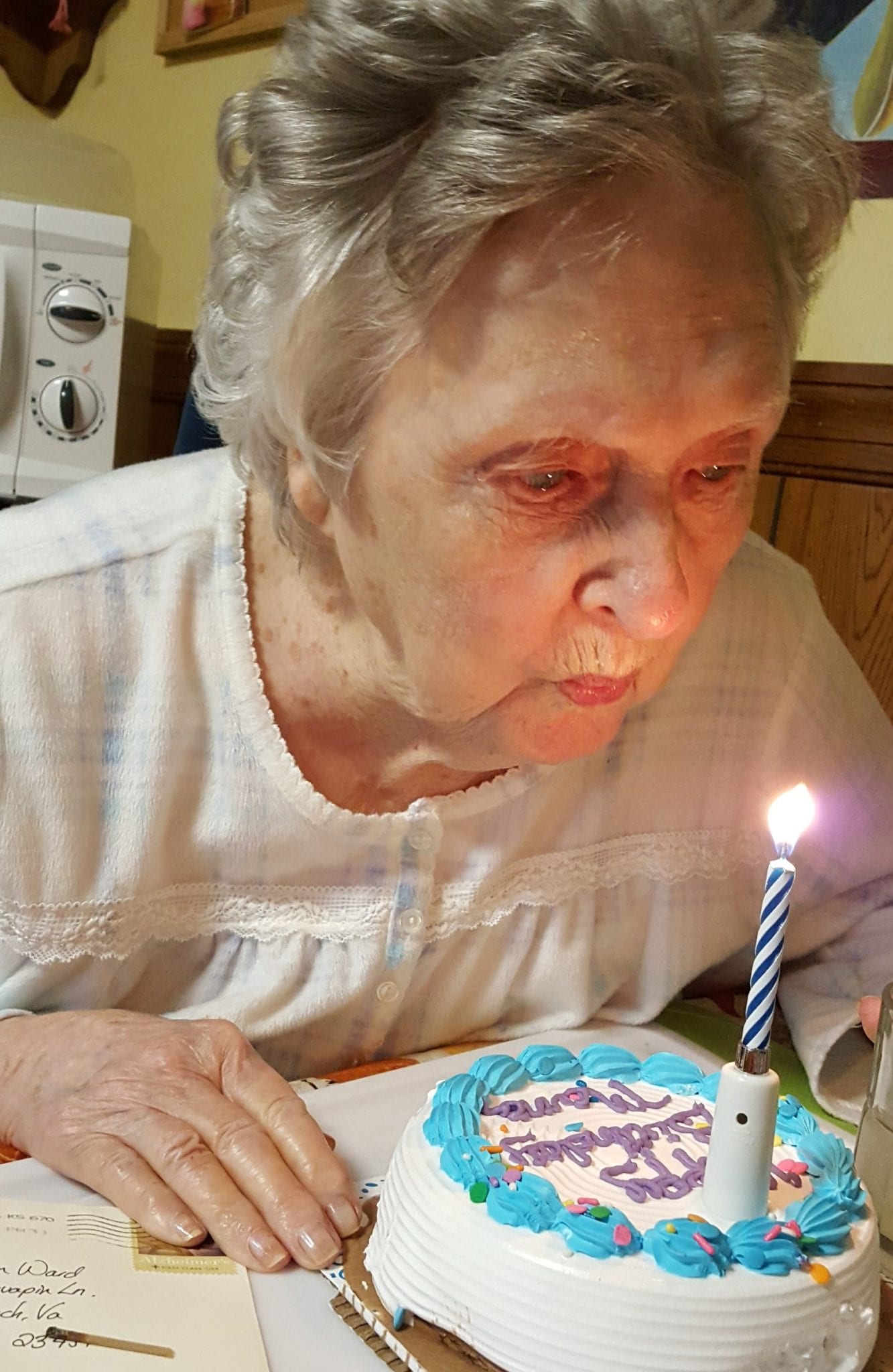 Marilyn Ward, 97, member of Great Neck Baptist Church, died peacefully at home
on July 27, 2020.   Her friends at Great Neck will remember her teaching
children’s Sunday School, and later rocking babies and changing diapers in the
nursery. Her focus was always toward the future.
In many ways Marilyn was the counter balance to her husband of 59 years, Tom
Ward, a career naval aviator and lifetime sailor whose wife was most at peace
working in her flower and vegetable gardens. She practiced organic gardening
long before it became fashionable and landscaped with cuttings rooted from
native plants. When rain or cold weather forced her inside, Marilyn liked to knit,
crochet, do needlework, sew, and bake. Her cookie jar was well stocked, in case
one of her children or grandchildren dropped in.
Marilyn so loved being a mother to five: Tom of Washington D.C, Bob of Virginia
Beach, Sue Miller of Elizabeth City, and Sally of Virginia Beach. In 1969, her son
Jim was killed in action in Vietnam. When people would say they were sorry to
hear she had lost her son, she would always answer back, “I haven’t lost him. I
know right where my Jim is.” It was this grief that drove her deeper into God’s
Word and to a stronger commitment to Jesus Christ.
If motherhood suited her, becoming a grandmother was an even better fit. She
and her husband Tom would drop everything to answer the needs of any of her
children or grandchildren. Their home provided a place of structure, consistency,
and traditional values. She is survived by 6 grandchildren: Jim Miller of Kill Devil
Hills NC, Mary Muntz of Greensburg KS, Dave Ward of Warrington PA, Sarah Ward
of Virginia Beach, Margaret Madrone of El Prado NM, and Duncan Ward of
Hyattsville. She had 11 great-grandchildren.
Marilyn began losing her memory during her mid 80’s, and her life became lighter
as the past fogged in her mind. She forgot to miss the loved ones she had lost,
forgot to be self-conscious, or worry about how others perceived her, becoming
child-like in many ways. Each day offered new perspectives and adventures even
as she re-visited once familiar places and ideas. Marilyn forgot she had arthritis.
She forgot she was old. She forgot she had heart failure. For the first time in her
life she began to truly relax, rest, and play.
As a Navy wife Marilyn had moved some 23 times. But thanks to the help she
received from her family, as well as from her gardening friend Trish Hann, and the
Westminster Canterbury Hospice at Home team, she was able to live out the last
50 years of her life in her home.
Marilyn was buried on July 29, 2020 in Princess Ann Memorial Park in Virginia
Beach. In lieu of flowers, the family suggests that donations may be made to the
Nature Conservancy, the Gary Sinise foundation, or Operation Blessing.

What a sweet lady. Rest In Peace.

I loved and admired her.