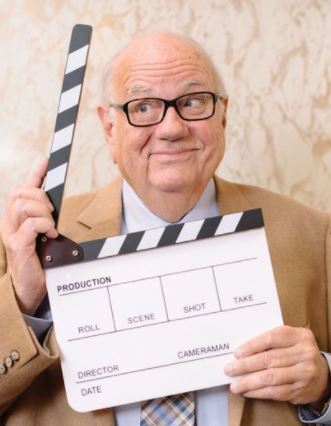 Mal was born July 9, 1938, in Roanoke Rapids, North Carolina, to Malvern and Bettie Vincent. He had a beloved sister, Betsy, twelve years his elder, who adored him and eventually accompanied “Sweetness’” (her pet name for him) all the way to the Oscars. Growing up on an expansive family farm, Mal sold peaches as a boy but was by no means agriculturally inclined. Mal was Mal from his nativity. On graduating from Roanoke Rapids HS, he proudly attended the University of North Carolina, Chapel Hill, where he helped run the film society, wrote literary essays for his puzzled math and science professors, and received a bachelor’s degree in journalism. He went on to work two years (the “dark years”) as a general assignment reporter in Burlington, NC, before finding his forever home at The Virginian-Pilot in Norfolk. Again, he was consigned to writing about police and fires as well as the arts, but entertainment editor Warner Twyford eventually passed away. Thereafter Mal reigned as entertainment editor and/or entertainment writer— large and in charge—for five decades. It took the collapse of the entire newspaper industry to dislodge him. Mal won a bevy of awards, met and interviewed the stars, and prowled his artistic territory like MGM’s Leo stalking the Serengeti. Some found Mal irascible; others were charmed and disarmed by his Southern savvy and monomaniacal knowledge of his field. Fortunately, he was a damn fine theater and film critic—our critic—and we shall miss him more than we know. By dint of his determination, Mal Vincent made himself a star among stars, nurtured our nascent performing arts institutions, and helped to raise the cultural standing of Hampton Roads throughout the world. –pl

“My condolences. I enjoyed his column.”

I talked to Mal at Hamilton in Norfolk. We both had seen it in NYC and ended up loving the Norfolk production. He wanted to know how I knew he was and I told him everyone knew that wonderful accent. He will be missed.