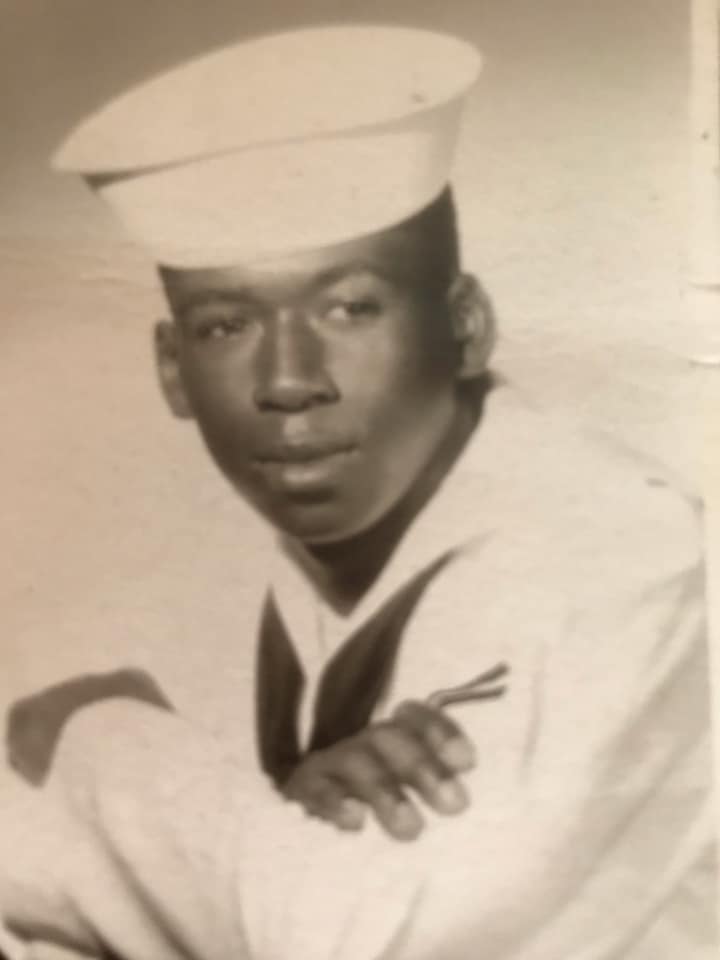 Lynwood (Butch) was committed to his country and promptly enlisted into the United States Navy at his earliest opportunity (17 years of age) on March 14, 1963.  Upon his enlistment (Butch) was assigned to the USS Charles F. Adams (DDG-2), based in Charleston, South Carolina.  Commissioned on 10 September 1960 and stationed in its homeport of Charleston, South Carolina. The USS Charles F. Adams was intended as a follow-on to the Forrest Sherman-class destroyers, the ship was originally designated as DD-952. Outwardly like the Forrest Sherman class, Charles F. Adams was the first U.S. Navy ship designed from the keel up to launch anti-aircraft missiles. To reflect the increased capabilities of the ship and to distinguish her from previous destroyer designs, Charles F. Adams was re-designated DDG-2 prior to the ship’s launching.  Of interesting note, following the commissioning of Charles F. Adams, Lynwood and the crew of Charles Adams took part in recovery operations for Walter M. Schirra’s Mercury 8 mission. While engaged in this operation, the Cuban Missile crisis developed and Charles F. Adams moved to the Caribbean Sea as part of the quarantine forces around the island of Cuba. In July 1969, Charles F. Adams left her homeport of Charleston and relocated to Mayport, Florida.  Lynwood Henry Costley (Butch) would serve aboard the USS Charles F. Adams from March 14, 1963 until January 17, 1967.  In addition, Seaman Costley would also earn both the National Defense Service Medal, and Armed Forces Expeditionary Medal, with 3 years, 4 months, and 15 days of Foreign and/or Sea Service.

Shortly after returning home from Service, Lynwood (Butch) met the love of his life, Carrol Elaine Roundtree (living just next door) while attending a family function.  Shortly after, Lynwood and Carrol married on September 21, 1968.  The Costley’s union brought forth three children, Earrol, Calvin and Shawn.  Butch was certainly all about family and caring for others, he was always known for his big smile and ability to bring everyone together.  A master craftsman, he was a MacGyver of his time possessing the ability to construct anything with the most limited resources. But more importantly it illustrates a point. His craftsmanship was about quality, passion, and experience. He built a family and made things he wanted to show to others. He built a long and extended family that he was proud of and wanted nothing more than a family legacy that would outlast his time.

A private visitation was held on Tuesday, December 29, 2020 at Altmeyer Funeral Homes and Crematory- Southside Chapel (5033 Rouse Drive, Virginia Beach, VA 23462). Butch will be laid to rest at Albert G. Horton Jr. Memorial Veterans Cemetery with honors, alongside the other patriots who shared interest in protecting the country they love. The date is scheduled for Monday, January 11, 2021 at 11:00 AM. For those that cannot attend, the family invites all who wish to be virtually involved to click the following link at the time and day listed for the service to witness the rendering of military honors Butch deserves. Please CLICK HERE to watch.

I usually get a call from you a few times a year, and because of the pandemic, time slipped away from me. I checked the internet to look for your phone number and came across this terrible news. lynwood, your extended Medical Examiner family is saddened by the news. We love you and pray you continue to rest in paradise.

My deepest condolences to the family. My last memory of my Uncle Butch was in 1977 when I joined the Army National Guard the 50th Armored Division out of Newark, N.J and at that time he was a Staff Sergeant there and he told me that he was proud that I was joining the Guard. My Uncle Butch told me if I needed any help transitioning to the military life that he would always be there for me. I will always be grateful for that promise from him. I will always remember him. Your nephew Maurice also known as (Poochie).

My dear cousin (Butchie). I am honored to have spoken to you sometime last year. This conversation will always come to memory. I never got to know you very well because you were in the Navy and had always stayed connected to the military. I always admired you. I was happy when you married and had your wonderful sons. You have always been an independent man and one of conviction. You had a wonderful smile , somewhat quiet, but always a strong man. I will always miss you. Your niece, Donna

I have such fond memories of my brother Butch growing up. He taught me to ride a bike and was in charge of me when my mother was home. He would cook, clean and sing to Motown music. I cried when he left to join the Navy. However, he emerged to be the best father, husband, friend and brother anyone could hope for. I will miss the conversations we had in recent years. Most of our talks were about family. He would mention his sons and how proud he was of them and how they parent their children. He loved his family. I’m so proud of my brother’s life accomplishments. My love for you is forever, your sister Effie

May your memories of Lynwood Costley, give you peace, comfort and strength…