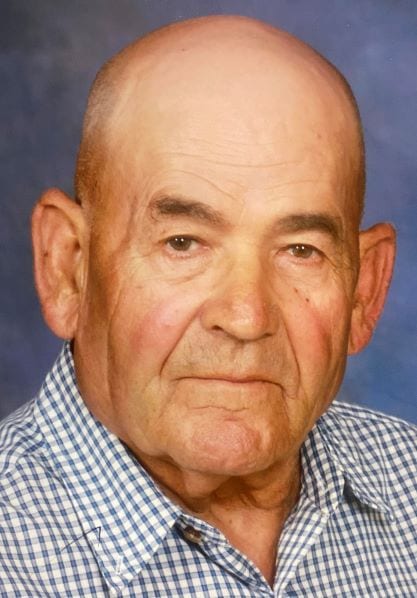 Lyle Tune Smith moved to Heaven on July 23, 2020. He was preceded in death by his wife Mary Elizabeth Smith; daughter Brenda Harp and her husband Robert Harp; parents Morton and Margaret Smith; siblings William Otto Smith, Miriam Woody, Leon Smith, Phyllis Childress, Marvin Smith, John T. Smith and Ruth Holt.
Lyle spent his early years growing up on a tobacco farm in Brookneal, Virginia. After coming to Norfolk in 1955, he was soon the owner of his very own gas station. In later years, Lyle was able to retire as a mechanic from the Virginia Beach School Bus Garage after 35 years of service. During that time, he also owned Salem Grocery and as well as Salem Fuel Oil Service. He also successfully farmed soybeans, corn, and wheat on 125 acres of land. Lyle was affectionately known in his community as “The Mayor of Salem Road” and he could always be found on his lawn mower. Left to cherish his memory is son Stanley (Laura) Smith, grandson Stanley Smith Jr.; granddaughter Shannon (John) Roberts; three great grandchildren named Thomas, Mary and Carleigh; sister Adell Crews and brother Larry Smith. Lyle Smith was a devoted husband, and a  loving father, grandfather and great grandfather.
Family will receive friends on Tuesday, July 28, 2020 from 6-8PM at Altmeyer Funeral Home-Southside Chapel. The funeral service will be held on Wednesday, July 29, 2020 at 10AM at the same location.
Memorial donations to St. Jude Children’s Hospital  can be made by clicking HERE. Donations in Lyle’s name can also be made to DAV by clicking HERE.
To view the livestream of the funeral service on your device, please click HERE.

I am sorry to hear about the passing of Lyle Smith . I just found out tonight on August 1st . A very nice man and always willing to help someone . Prayers to the Smith family in the coming days and months .
Sincerely ,
Aubrey and Mollie Priddy

us kids called him smitty back in the day when he also ran northlanding crocery better known as the little store. i think it was about 1967
..at that time he liked his pall mall none filterd cics.many kids new who smitty was.not to many salem roaders left from back in the day.

Condolences to the family. We will miss you uncle Lyle.

Stanley & Stanley Jr., Our thoughts and prayers are with you and your family during this difficult time.

I will miss you Uncle. As much as I miss Aunt Mary and cousin Brenda. I know your reunion with them is glorious. May you be at peace and experience all of that God has promised.

We are so sorry for the loss your family has endured. We will keep y’all in our prayers.

You and your family are like family to me. I am keeping you all in my prayers. He was a wonderful, generous, kind man.

Stanley and family, prayers and sympathies in the passing of Uncle Lyle.

Prayers and sympathies in the passing of Uncle Lyle