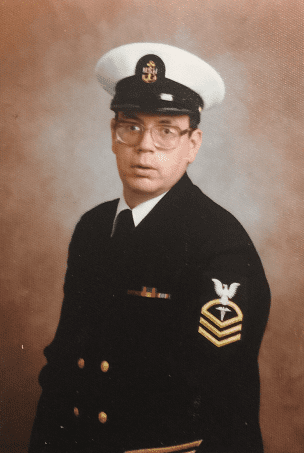 Louis Edward Ziegler Jr. passed away October 13, 2016. He was born April 12, 1952 in Salem County, New Jersey to Louis E. Ziegler Sr. and Mary Elizabeth Holmes Ziegler who preceded him in death. He was also preceded in death by his sister, Patti Lynn Ziegler Colton. He is survived by his wife of 40 years, Kay R. Baker Ziegler and thier two daughters, Melissa K. Ziegler Trevena, and Heather J. Ziegler Richardson. Lou is also survived by two son in-laws Richard (Rick) Trevena and Patrick Richardson and three grandchildren, Richard Michael Dallas Trevena, Siarra Kay Trevena and, Peighton Lindsay Richardson. He is also survived by his siblings James (Jimmy) Douglas Ziegler and his wife, Nancy Zimmerman Ziegler and Trina Marie Ziegler D’Agostino and husband, Donald D’Agostino. Plus other family members.
Lou had a very productive life. He served his Country proudly in the United States Navy as a Radiology Technician and retired as a Chief after 21 years of service. Lou than went to college and got an associate’s degree in Business Administration. After finishing college he went to work at Tidewater Community College as a Computer System Specialist. After 17 years he retired from his second career. For the past 2 years he has been active as a volunteer for the J. Robert Graham Chapter #26 of the DAV in South Norfolk.
The funeral service will be held on Tuesday, October 18, 2016 at 11:00 am at Altmeyer Funeral Home, 929 S. Battlefield Blvd. in Chesapeake. A visitation will be held at 10:00 am. Military Honors will be rendered at Albert G. Horton Jr. Memorial Veterans Cemetery in Suffolk, with fellowship and refreshments afterwards at Sheltered Christian Church, 2526 Rodgers St. Chesapeake, VA. 23324.
In lieu of flowers, please click HERE to make a contribution to The American Transplant Foundation in Lou’s honor. Condolences may be left for the family at www.altmeyerfh.com.

Condolences to the Ziegler family. Our thoughts and prayers go out to your whole family. Psalms 147:3 says God, “heals the broken hearted, and binds up their wounds.” May God bring you comfort and peace.

My sincere condolences to Lou’s family. I have fond memories of working with Lou at the Chesapeake campus of TCC from 2001 to 2010. Lou was a great guy and I will miss him.

I am so sorry to hear about Lou, he was such a positive person to speak with. I did not know him well, but appreciated his smile and willingness to help with computers at TCC or just a quick comment to make me laugh, My prayers are with you, his family.

May you rest in peace Lou. TCC will always remember you. To the family, please accept my condolences for your loss. I am keeping all of you in my thoughts and prayers.

Kay and family you are in our thoughts and prayers. Rest in peace Lou.

Kay and family you are in our thoughts and prayers.

Kay, Thoughts and prayers are with you and your family at this difficult time. May God comfort you all and give you strength to find peace in the memories of the love you shared.

Louis Zeigler was a wonderful man he would do anything for you he would fix computers he would sit on the front porch and say hi to alll the neighbors he will truely be missed thank you for serving in the military rest in peace my sailor youare on vacation for eternity with the Lord. ps don’t worry about your yard it is in good hands