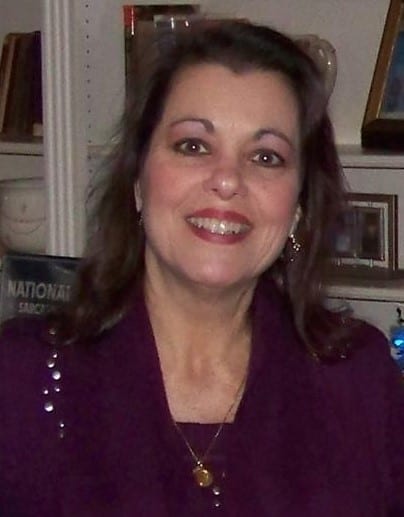 Loretta Rossi Wack, 60, of Chesapeake, passed away peacefully on January 23, 2017 surrounded by her family. She was born on March 14, 1956 to Anthony and Barbara Anne (Winfield) Rossi in New York. She was a member of St. Gregory The Great Catholic Church and retired after 32 years from Bank of America as an IT supervisor.
She was preceded in death by her father, Anthony Francis Rossi.
Left to cherish her memory are her mother, Barbara Anne Rossi; her husband, Steven J. Wack; her brothers, Daniel Brian Rossi (Sharon), Michael Anthony Rossi (Kristen), and Richard Robert Rossi; and her sister, Regina Rossi Valentine (Robert); six nieces and nephews, Nicole, Joseph, Anthony, Michaela, Kristina and Christopher.
Loretta worked at The Bank of America for 32 years. Her last position at the bank was as the AVP Consultant Systems Administrator and Support.
Loretta was a living metaphor for not just life but for living . . . she was a living manifestation of “how” one should live . . . with humility, selflessness, and sacrifice. She loved her God, her country, her family, her husband, her friends and would do anything for each and every one of us and for many of us she has.
She was a symbol of selfless humanity and she brightened our lives by being in it
Loretta had a wonderfully mischievous sense of humor as well as an infectious laugh.
She never wanted to talk about herself, but would rather listen and learn about others. True to her selfless nature, Loretta was always more concerned about other’s comfort and feelings than her own.
She loved her music, playing the piano; and going to the beach. She was a voracious reader and an amazing writer, especially pieces, often humorous, that were dedicated to family members.
The visitation will be held at Altmeyer Funeral Home, 5792 Greenwich Road, VA. Beach on Friday, January 27, 2017 from 6:00pm to 8:00pm with a rosary service to begin at 7:30pm. The mass will be held at St. Gregory the Great Catholic Church, 5345 Virginia Beach Boulevard, Virginia Beach on Saturday, January 28, 2017 at 1:00pm with Father Cristiano Brito, O.S.B. officiating. A reception will be held at the church after the mass followed by a 4:00pm graveside service at St. Mary’s Catholic Cemetery, Norfolk.
The family wishes to express sincere appreciation to Dr. Dean S. McGaughey, III and his staff at VA. Oncology, Medi Home Health Care Hospice, and the oncology nurses & physicians at Sentara Norfolk General in 6RP for the excellent care given to Loretta.
In lieu of flowers, donations may be given to The American Cancer Society, 4416 Expressway Dr. VA. Beach, VA. 23452.
Condolences may be shared with the family at www.altmeyerfh.com

So sorry for your loss. You are in our prayers. Much love.

I first met Loretta in 1979 while working at VNB. What a lovely person, with such a beautiful smile! Her soul, family, and friends are in our prayers and hearts.

Loretta was a good, kind and decent person who was the light in the room when she
was present

My prayers go out to Loretta’s family. I worked with her at BOA and I remember how kind she treated me.

To the Rossi and Wack Families, Loretta was a wonderful friend and co worker to me. We had great times at BOA especially during out lunch breaks. May GOD be with you during this time.

Thinking of Uncle Steve during this difficult time of loss. I hope you can find peace in knowing she is in a better place. Although I haven’t seen Loretta in many years all my memories of her are sweet and I remember her smile.

Our thoughts and prayers are with all the family, we never had the pleasure to know Loretta but do know she comes from a beautiful family whom we have much love and respect for. She has to have been a wonderful person. God bless all of you! You are all in our continued prayers.

Our thoughts are prayers are witht he entire Rossi family. Loretta was an amazingly beautiful and strong woman. God bless her and all of you. Marianne & Don Green

I will always remember Loretta for her kindness, thoughtfulness and sweet spirit. May her soul be at peace with the angels. God Bless her love ones and lift them up during this time.