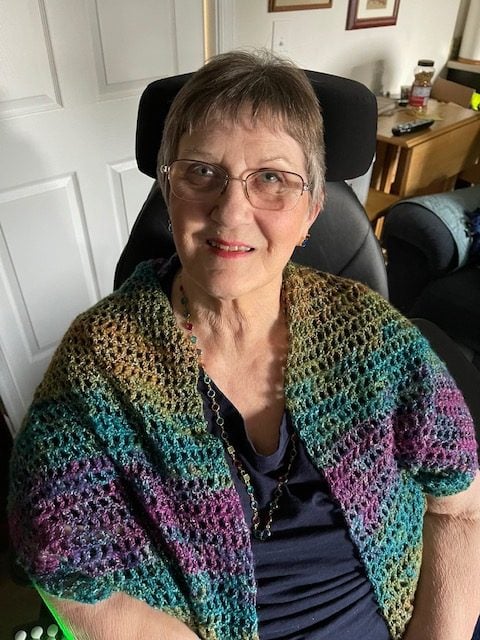 Linda Fry, 74, passed away on Thursday, January 6, 2022 in Virginia Beach, VA. Linda was born on April 12,1947 in Everett, WA to Victor and Frances Westman. She was a graduate of Cascade High School in Everett, class of 1965. She lived most of her life in the Everett area until 2018, when she moved to Virginia Beach.

Linda grew up in Everett, WA. She met James Fry at church summer camp when she was 12 years old. Linda married Jim on December 31, 1965, in Everett, WA. They were married for 56 years.Their family expanded to include Lisa Dawn (1966), Nancy Jeanene (1969), and Karin Diane (1973 – 2015). As a young child, Linda had polio. As she aged, she developed Post-Polio syndrome; a disease marked by nervous and muscular degeneration. By 2013, she lived full-time in her wheelchair. Linda’s perspective was not that she was confined to a wheelchair, but that she was liberated by it because the chair made it possible for her to continue to participate in regular activities. Linda was raised in a Christian home and accepted Jesus Christ as her personal savior when she was young. Her entire life was devoted to developing her personal relationship with Jesus, studying God’s Word, discipling others, mentoring young moms, and being a shining example of what a Spirit-filled life looks like. Linda’s testimony and favorite song was “Jesus Loves Me.” Her favorite Bible book was Ruth and her favorite verse was Philippians 4:13, “I can do all things through Christ who strengthens me.” Her lifelong desire was to be a mother, a homemaker, and a Christian.

Linda was preceded in death by her parents Victor and Frances Westman, brother David Westman, and daughter Karin Fry Stapp.

A memorial service will take place on January 21, 2022 at Suburban Christian Church in Virginia Beach. Donations in lieu of flowers should be made to King’s Choir of Hampton Roads.