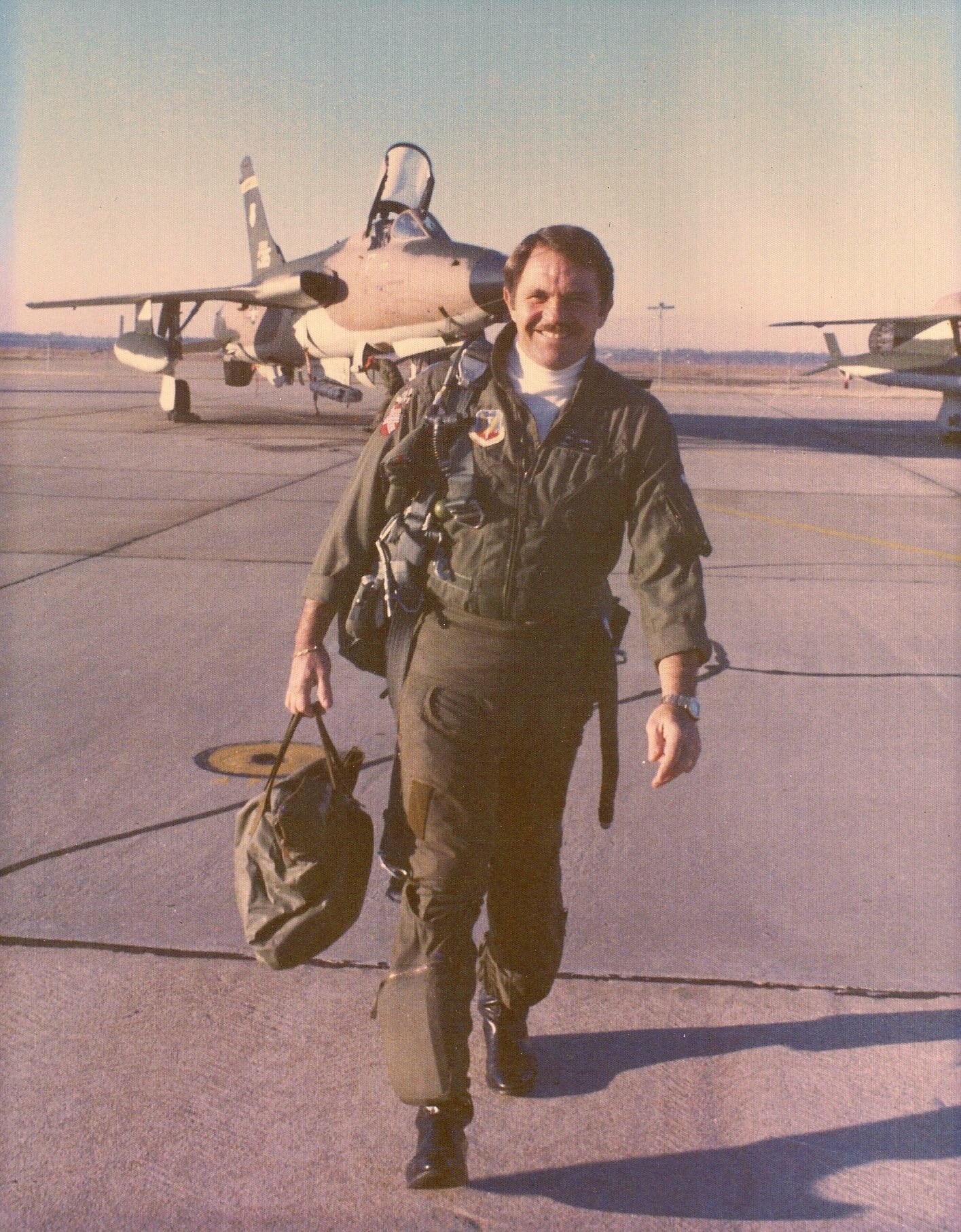 Lieutenant Colonel William Orgain Harris III, USAF Retired, 79
LTC William Orgain Harris III, 79, of Norfolk, Virginia, beloved husband and best friend of Amelia Frances (Matthews) Harris for 40 years passed away peacefully on March 11, 2016.  During his battle with cancer, Bill was surrounded by family and friends, near and far.
Bill was a retired United States Air Force Officer (US Naval Academy, Class of ‘59), and USAF command pilot with over 30,000 hours in jet aircraft.  Logging more than 700 combat missions in Southeast Asia, Bill was awarded the Silver Star Medal, the Defense Superior Service Medal, two Distinguished Flying Crosses, the Bronze Star, 34 Air Medals and the Virginia National Guard Commendation Medal in the service of his country.  His final Air Force assignment at the Joint Forces Staff College in Norfolk, Virginia brought him and Amy back to the area, family and friends they loved dearly.
Never one to slow down, Bill was the General Manager of the Virginia Beach Tennis & Racquet Club.  He went on to serve the State of Virginia as an Assistant Athletic Director at Old Dominion University. And later, he went to work at Cardinal Homes, Wylliesburg, Virginia, as a special assistant to the CEO. He was an Executive Director of Halifax County YMCA and the Hampton Roads Armed Forces YMCA. He was a docent and keeper for the Virginia Zoo in Norfolk, Virginia.
In retirement, he was the author of two books, The Methuselah Solution and Murder in Mermaid City.  He loved helping people at work and at play.  Together with his wife Amy, Bill is survived by his son William (Michele) Harris IV, brother Tom (Carol) Harris, sister Jane (Harris) Nance, sister-in-law Pat Harris, sister-in-law Janet Bacuzzi, brother-in-law Matt (Edna) Matthews, former spouse and friend Carroll Harris, granddaughter Stephanie Harris, grandson Alex Harris and his wife Anne, nieces, nephews and extended family. Bill was a loving father, husband, grandfather, uncle, mentor and friend to all.
Preceding him in death are his parents, William O. Harris Jr. and Ennis Byrd (Hartley), his daughter Rebecca Harris and his brother James Harris.
Bill’s final wish to donate his body in the name of science is respected by his family and friends and is a final salute to the person Bill Harris was to all of us. A Celebration of Life paying tribute to his legacy will be held at a later date.
The Altmeyer Funeral Home Southside Chapel is assisting the family. Online condolences may be expressed by clicking the “post a condolence” button below. Bill requests donations be made to Feeding America. Please CLICK HERE to make a memorial gift. Or memorial gifts may be made to the Virginia Zoo Veterinary Wellness Center Please CLICK HERE to make a memorial gift.

My deepest condolences for your loss and appreciation for a life such as Bill’s. Well lived, dedicated and honorable. We were privelidged to share time with this remarkable soul.

Amy, my prayers and condolences are small offerings on Bill’s passing. We were roommates and adventurers together. Rosemary and I will always carry fond memories of a true friend.

It is only appropriate that a pilot can’t figure out this website……The guy was one for the ages. The girl complimented him in every way….. If there was a weakness, she was his strength…… My only regret is that life has seen us go down divergent paths. I have always been blessed by knowing both of you. Godspeed to “William Zero” and his partner…… His battle, your battle, is the stuff that challenges and inspires us all to never stop moving forward.
Love, Mark

In case the previous attempt failed, we are so sorry about Bill’s passing, and wish we lived closer to to ya’ll and other family. You are definitely in our prayers.
Love

Our only memories are his childhood and once at Bill IV and Michelle’s here in Chattanooga. That was nice. We are so sorry about his passing; you folks are In our prayers.

Amy, so sorry about Bill’s passing. We wish we lived closer to you folks. We have you in our prayers.
Love

I am thinking of you and loving the care you gave Bill. He was a very special nephew. Love, Aunt Tag

The more enriched a person makes our lives, the harder it is for us to let them go. For this reason, I know that saying goodbye to Bill is the hardest sorrow to bear. I hope that the wonderful memories you have as well as the love and friendships around you , will support you through this time and help you smile once more

Amy, we are deeply saddened by the news of your loss. We pray that God will grant you the strength needed to get through this moment in your life. Our sincere condolences. Bill will be in out prayers.

Amy, William, Michelle and children, very sad times for all. He was a big influence in my life, I will always remember him with great respect and happiness. From the Noyce family, our comforting thoughts for you all. And for us, happy recollections of Bill’s bearing in our lives.