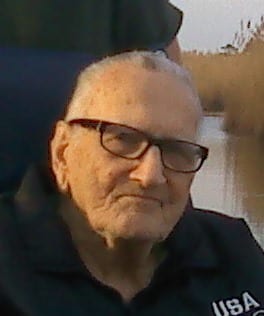 Lewis Earl Cannon was born October 16, 1927 and lived one of the most interesting lives. Sadly, he didn’t make it to 100 as he had planned, but he had a full life, that is for sure.
Earl, as most called him was labeled “smart as a whip” by his mother. He was also a great baseball player being recruited by the Yankees. While at William and Mary, the “Great War” loomed and being overwhelmed with a sense of duty, he enlisted in the Army. Everyone including his parents thought he was crazy to leave, but as he told it, he felt he owed it to his country to go. Being in Germany and seeing the end to Hitler’s terror was a profound moment in his life. His whole life he was overwhelmed by the memories of what he saw. He always said he could never shake the memories. When he returned from the War, he met up with his cousin Buster to go out on the town. Buster had a beautiful girlfriend Jane. Earl told her,” You are the most beautiful girl I have ever seen. Please tell me you have a sister.” And, she certainly did. Within a few days, Jane had set up a date with her sister Bernadette. Earl said it was love at first sight. Bernadette was beautiful with sparking green eyes and dark, wavy hair. He was more outgoing and liked to kid around. She was more reserved but always came through with that one line he couldn’t beat. They had eight children: Timothy Paul, Lewis Earl III, Patricia Leigh, John Kevin, James Alfred, Robert Shawn, Terry Gerard, and Dennis Edward. The family was a tight-knit and lively bunch. With seven boys, Bernadette and Earl had their hands full but they loved every minute of it. Earl and Bernadette moved a few times before returning to home where he took a position as the lead air traffic control man at Norfolk International. Retiring at the young age of 43 from one of the most intense and stressful careers, suited him. He was thrilled to acquire a large property in Sandbridge on Back Bay and so were the kids. Soon, Earl transitioned from being a work-a-holic to be out on his vast property gardening, building things in his workshop and spending time with his beloved golden retrievers. If he wasn’t home, he was on the golf course, playing three to four days a week across the region. He and Bernadette hosted many parties and picnics at their place which they loved. Nothing made them happier than having a house full of family.
He also loved animals, especially his dog Goldie who died in 1984 and his beloved horse Buck. He was always taking in a pet that someone discarded. Ask his family about the crippled goose?
The truth is everyone loved Earl – he always had a funny joke to tell. He talked to everyone he met. He spent many years with the Knights of Columbus and was active in Catholic Church. He coached sports. He volunteered and was a great dancer.
Earl was an avid reader. He typically read seven to eight books a week. He was fascinated by Nostadamus, the Bermuda Triangle and time dimensions. His mind was so open and full that his grandkids would love to talk to him for hours at a time.
He worked very hard to give his kids the life of great adventure. There were lots of boats. Parties and picnics. Horse and cows. Dogs and bunnies. If someone wanted something, he made sure they had it. Everyone loved coming to visit and that’s how he liked it. When Bernadette died in 1999, he moved from Sandbridge because there were just too many memories to stay. After she died, he kept busy with friends and family – living life to the fullest. When he collapsed in Haynes in 2011 that was his first time in the hospital since he had gotten chicken pox in his forties. He did as well as can be expected after bypass surgery but missed his healthy body. He’d relent about how terrible it was getting old as his mind never wavered. The week before he left us, he was playing Jeopardy and winning. Even after losing his two children (Tricia in 1998 and Terry in 2010), he kept his love for life. Of course he did, he had so many that loved him. He would say “Life is for the living. You can’t mourn too much. Go out and live.”
He was one-of-a-kind. A man who wore his heart on his sleeve and wasn’t afraid to cry. But he was no pushover either and would vehemently stand up for what was right. He married his true love and loved his family with all of his heart. He lived the life he wanted and loved it until the end.
He is survived by sons Timmy, Lewis, Kevin, Jimmy, Robert and Dennis, many grandchildren and great grandchildren and his brother Eddie. In lieu of flowers please make donations to St. John the Apostle Catholic Church

My heart aches and my sympathies go out to the entire family. May God bless you all. I am praying for you. Lovingly, Sandee

So sorry for your loss. Praying for your family. God will help you get through this.

Deepest sympathy for the entire Cannon family. Earl will be missed by everyone that knew him. A great man with a wonderful family.

He was a great man and beloved father. Sincere condolences to his entire family.

Gordon and family, thinking of you during this time of sorrow – Nana (Betty Moxey)

We are so sad for your loss, God Bless your family.
Much Love, Uncle Jack, Aunt Cathy, Katie & Nikki

My deepest sympathy to the family and many friends of Lewis. We played golf in the Virginia Beach Seniors golf club.

May he rest in peace and be remembered for his many acts of kindness during his long life.

My deepest sympathy to the famlly and many friends of Lewis.

We played golf in the Virginia Beach Seniors Golf Club and my memories of him are the best.

May he rest in peace, and be remembered for his many acts of kindness in a long life.